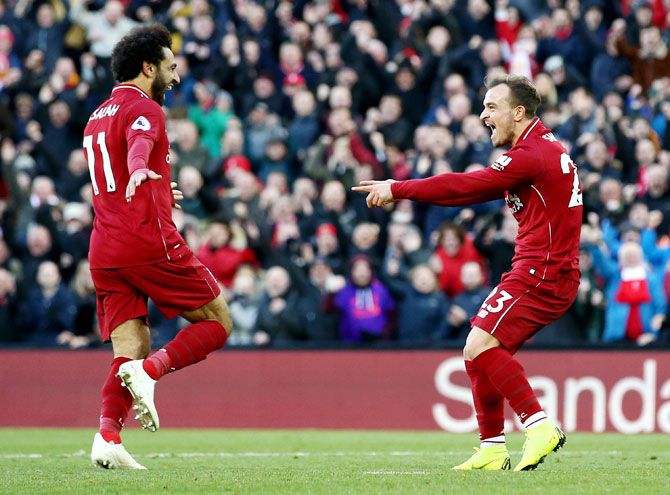 Sadio Mane scored a brace of goals and Mohamed Salah continued his return to form as Liverpool moved to the summit of the Premier League with a comfortable 4-1 victory against lowly Cardiff City at Anfield on Saturday.

Salah ended any suggestion he was suffering a 'goal drought' when he converted from close range after Mane's shot was parried in the ninth minute -- his fourth goal in three matches.

Liverpool enjoyed 86 percent possession and had 12 shots in a commanding first half, the only surprise being that Juergen Klopp's side did not add a second goal before the break.

It took until the 66th minute for Liverpool to add a second, with Mane wriggling through a couple of challenges before unleashing a fierce drive into the corner with his left foot.

Cardiff City set up a potentially nervy finish when Callum Paterson scored in the 77th minute, but Xherdan Shaqiri and Mane put the game to bed with late efforts.

Liverpool, still unbeaten and winners of eight of their 10 matches, have 26 points -- three clear of champions Manchester City who will reclaim top spot if they beat Tottenham Hotspur on Monday evening. 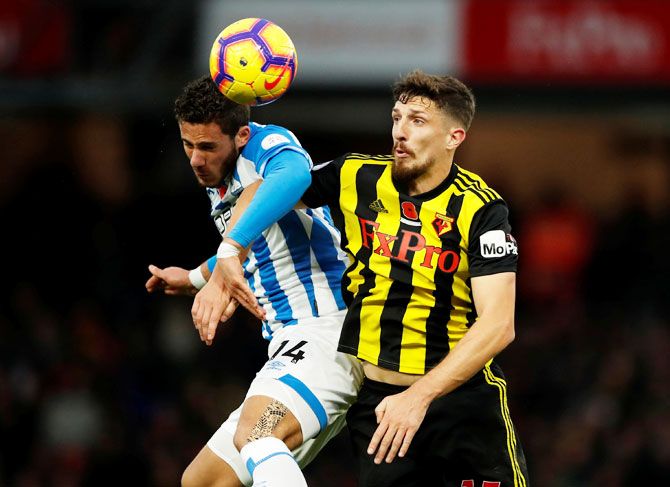 Roberto Pereyra and Gerard Deulofeu were both on the scoresheet as Watford beat Huddersfield Town 3-0 in the Premier League on Saturday to leave their opponents still searching for a first victory of the season after 10 games.

Argentine Pereyra gave Watford the lead in the 10th minute at Vicarage Road when he picked the ball up near the left touchline and dribbled through a crowd of defenders before sliding it under goalkeeper Jonas Lossl from close range.

Deulofeu doubled Watford's lead with another fine individual effort in the 19th minute, getting the better of two defenders as he cut inside from the right before sending a powerful shot across Lossl and into the far corner of the net.

Huddersfield almost found an immediate response but Ben Foster got his fingertips to Chris Lowe's swerving shot from distance.

Deulofeu spurned a glorious chance to extend Watford's lead five minutes after the restart when he shot narrowly wide after finding himself clean through on goal.

Lossl denied Will Hughes in the 60th minute after an intricate Watford passing move on the edge of the Huddersfield box, but Isaac Success added a third for Watford 10 minutes from time following a set-piece.

The defeat sent Huddersfield to the bottom of the standings, below Newcastle United on goal difference, while Watford stay in seventh place. 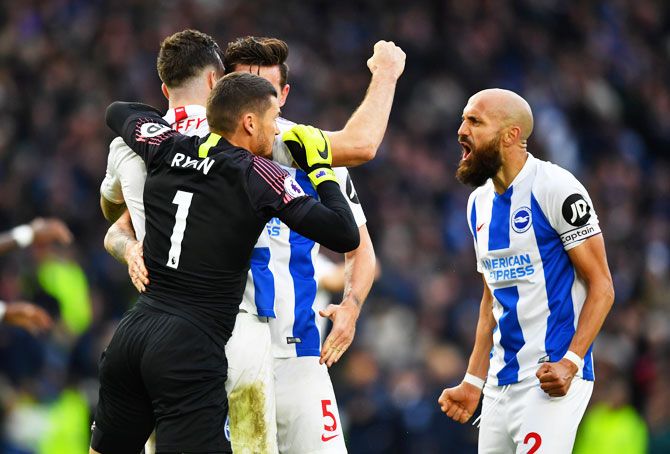 Brighton & Hove Albion striker Glenn Murray bounced back with a poacher's goal after being carried off on a stretcher a week ago to clinch a 1-0 win over Wolverhampton Wanderers in a pulsating Premier League clash on Saturday.

Murray, who suffered a concussion after a clash of heads in last week's win over Newcastle United, netted his 100th goal for the south-coast club early in the second half to give Chris Hughton's mid-table side their third 1-0 league win in a row.

Wolves' Portuguese head coach Nuno Espirito Santo made a rare change to his starting lineup after last week's loss to Watford. He brought in forward Adama Traore in place of Diogo Jota for the visitors, and they pummeled Brighton from the off.

Matt Doherty almost gave Wolves the lead in the 33rd minute but he curled his left-foot outside of the far post, and Brighton's Shane Duffy went close with a trademark towering header towards the end of a scoreless first half.

The home side broke the deadlock three minutes into the second period, with Murray helping the ball on from a throw-in and then steering it deftly into the net when it was played back to him by full back Bruno. They are now in 11th spot.

Brighton keeper Matt Ryan was forced to pull off a string of fine saves as Wolves poured forward looking for an equaliser, and he managed to protect the lead and consign the ninth-placed Midlands side to their second league defeat in a row.

Southampton and Newcastle draw a blank at St Mary's 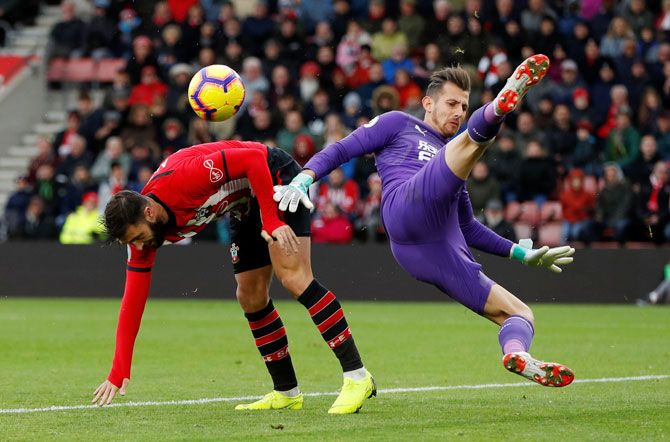 Newcastle United's winless start to the Premier League season continued as they were held to a goalless draw by Southampton at St Mary's Stadium on Saturday.

Rafael Benitez was desperate to see his Newcastle side secure their first victory of the season but their dismal form continued as they again struggled to find the back of the net and remain second from bottom on three points.

Saints came closest to breaking the deadlock after 41 minutes when Ryan Bertrand delivered a low cross into the box and it fell perfectly for Mario Lemina who saw his close-range shot hit the outside of the post.

The home side were close again on the stroke of halftime when Newcastle keeper Martin Dubravka made a superb save to keep out a header from Jack Stephens.

Charlie Austin finally had the ball in the back of the Newcastle net midway through the second half but his effort was ruled out for an earlier foul on Dubravka.

Southampton, who are in 16th place with seven points, have failed to win at home in the top flight this season and have now gone six league games without a win.

Fulham suffered their fourth consecutive Premier League loss and remain mired in the bottom three as a brace from Callum Wilson helped Bournemouth stay sixth with an impressive 3-0 victory at Craven Cottage on Saturday.

The away side opened the scoring from the penalty spot after 14 minutes when Wilson was brought down inside the area by Fulham defender Timothy Fosu-Mensah.

The Bournemouth striker picked himself up and made no mistake striking the ball past Fulham keeper Sergio Rico for his fourth Premier League goal of the season.

Fulham's Denis Odoi wasted a golden chance to equalise when he headed the ball wide of the post just before halftime and Bournemouth made them pay as talented youngster David Brooks added the crucial second after 72 minutes.

It was a fantastic counter-attack from Eddie Howe's side as Wilson's challenge on the halfway line allowed Bournemouth to break clear and Ryan Wilson showed great awareness to release Brooks who slotted the ball through the legs of Rico.

Fulham's Kevin McDonald was shown his second yellow card of the game in the 73rd minute for a foul on Brooks and the hosts' misery was compounded when Wilson added his second of the game after 85 minutes when he raced onto a pass from Ryan Fraser and beat the keeper at his near post.

The pressure will mount on Fulham manager Slavisa Jokanovic once again as they have now gone six Premier League game without a win and have only one win in the top flight this season.