Dutch midfielder Nigel De Jong has been included in the AC Milan squad to face Bologna after joining the Serie A side on a three-year-contract from English champions Manchester City on Friday.

"Nigel De Jong, much to the satisfaction of the Milan faithful, is now one of our players," the Italian club said on its website (www.acmilan.com).

The 27-year-old joined Manchester City in 2009 and made 104 league appearances for the club.

The signing of De Jong and Spain winger Bojan Krkic, who had been on loan at AS Roma from Barcelona, meant Milan should now challenge for the title, vice president Adriano Galliani said. 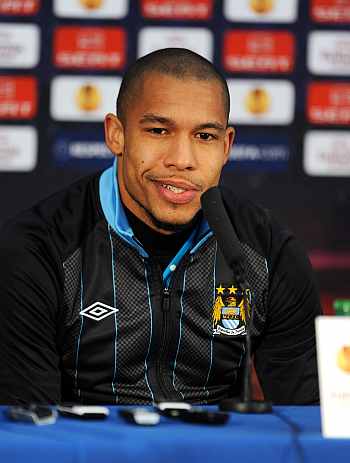 "With the arrival of Bojan and De Jong, (coach Massimiliano) Allegri should be worried, because our objective is no longer third place," he said.

"Now we have to fight to win like we have for the last two years. With these two signings Milan have closed the gap.

"I believe that, among the players that have arrived from abroad, Milan have taken the one with the biggest name.

"Maybe some unknown will become Messi, but at the moment, the big-name player is definitely De Jong," Galliani added.

Milan have had a troubled time recently, selling last season's top scorer Zlatan Ibrahimovic and Thiago Silva to Paris Saint-Germain in a bid to balance the books while Alessandro Nesta and Gennaro Gattuso left the club.

They also lost their opening game of the Serie A season at home to promoted Sampdoria.