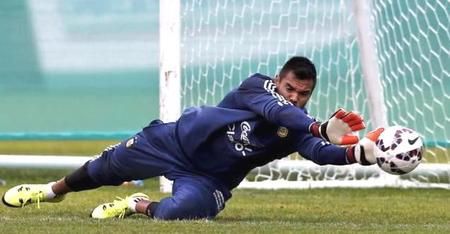 Manchester United have confirmed the signing of Argentina goalkeeper Sergio Romero on a three-year deal, reuniting manager Louis van Gaal with a player who helped bring him a Dutch title but also caused him World Cup heartache.

The 28-year-old, who played under Van Gaal at Dutch side AZ Alkmaar, joins United as a free agent after leaving Sampdoria at the end of his contract.

"To play for the biggest club in the world is a dream come true for me," he told United's website.

"Louis van Gaal is a fantastic manager and I cannot wait to get started on this new and exciting challenge in my career."

Romero, who has an option for an additional year on his contract, has joined United on their pre-season tour of the United States, where they beat Barcelona 3-1 on Saturday.

"Sergio is a very talented goalkeeper. He was a young keeper during my time at AZ Alkmaar and I am delighted he is joining Manchester United," Van Gaal said.

"He had a fantastic World Cup last summer in Brazil, although that is something I have put to the back of my mind. He will be a great addition to the team and I am looking forward to working with him once again," Van Gaal added.

Romero's arrival is expected to herald the departure of United's back-up Victor Valdes, who was left out of the tour party and told to leave the club due to a row with the manager.

Van Gaal said Valdes had refused to play for United's reserve team, a claim disputed by the Spaniard.

Speculation also continues over the future of first-choice United keeper David De Gea, who has been linked with a move to Real Madrid, with the La Liga team's defender Sergio Ramos heading to the English side as part of a swap deal.

"I know him (Romero) very well and I think in our situation, if De Gea is going or not going, it is always a threat and we have to take care, make sure that we are prepared and that is why I think it is very good that Sergio Romero is now a Manchester United player," Van Gaal added.

The Argentine did not travel with United on their tour, with Van Gaal admitting he "does not know why".

© Copyright 2022 Reuters Limited. All rights reserved. Republication or redistribution of Reuters content, including by framing or similar means, is expressly prohibited without the prior written consent of Reuters. Reuters shall not be liable for any errors or delays in the content, or for any actions taken in reliance thereon.
Related News: Manchester United, Sergio Romero, Louis van Gaal, AZ Alkmaar, Argentina
COMMENT
Print this article