Nemanja Vidic was articulate and candid while speaking at a conference in Mumbai on Friday. 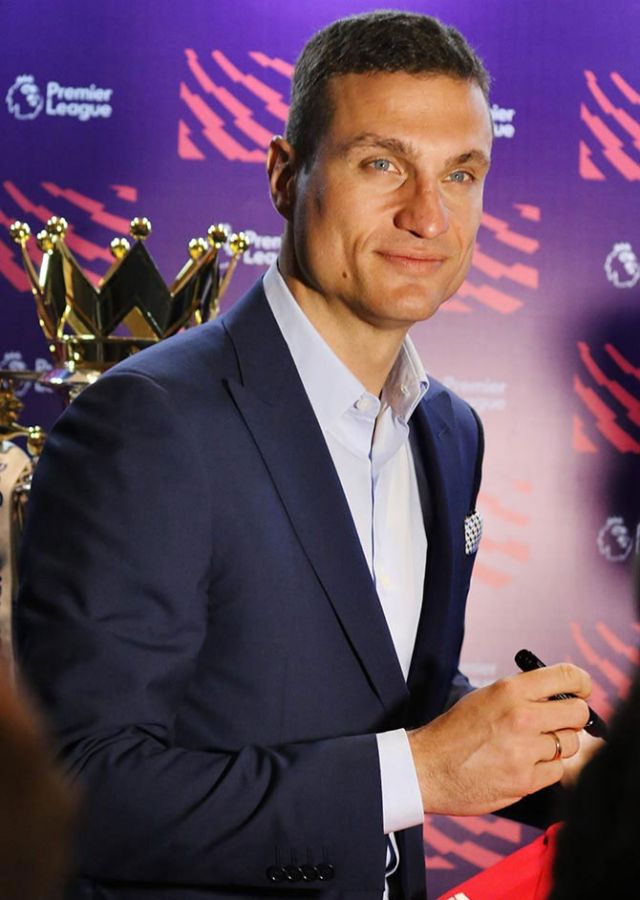 IMAGE: Nemanja Vidic, in Mumbai for a two-day promotional event, went back in time, speaking about his decade-long spell at Old Trafford and more. Photograph: Uttam Ghosh/Rediff.com

When Nemanja Vidic gave Sir Alex Ferguson the nod and joined Manchester United from Spartak Moscow during the transfer window in January 2006, the defender knew he was in for something special.

“I was leaving to join Fiorentina. I was also in discussions and negotiations with then Liverpool manager Rafa Benitez for one month. There was lot of talking, but really didn’t come to signing a contract. Just before the new year I got a call from Ferguson, who asked ‘would you like to play for Manchester United’ and I said ‘yes’. And everything was done,” revealed the former Manchester United defender, who had sealed the deal for a fee of around 7million pounds.

“Sometimes you go join the club with the feeling that the manager wants you, how he did the negotiations for you. He was direct and straight. Since then I just went out and won all those trophies. It’s the best thing that happened to me,” added the Serbian.

Over time, he built a reputation for himself as ‘The Warrior’. But it wasn’t the smoothest of starts to a career at Manchester.

“The beginning was tough. It took me six months to adapt. Everything was so fast. I was in a team with top players – (Cristiano) Ronaldo, Wayne Rooney, Ryan Giggs, Paul Scholes. With players like that sometimes it was tougher at the training ground more than at a match. So I was struggling in the beginning,” the 36-year-old said at 'The Football Movement', a two-day conference aimed at exploring potential business opportunities in India.

“First six months I didn’t know what I was doing. I could not dispossess opponents, they were too fast for me.

“Then, after the pre-season, with all of us young players developing, Ronaldo still growing as a player, I came; Patrice Evra, Michael Carrick all of us growing, young and talented.

"Then we had the experienced Paul Scholes, Rio Ferdinand, Wes Brown, Mikael Silverstre, who had won the title before. We had a good mixture. Once we started winning in two-three matches we had a feeling like yeah we can win and I had settled in and my nerves were gone,” explained Vidic, who’s move to Manchester coincided with United winning three titles in a row. Along with Rio Ferdinand, they made a fierce centre-half partnership for the Old Trafford club.

And the big-hearted Serb gives credit where it is due, highlighting the reasons for this success.

“We were good friends off the pitch. As soon as I came to United he (Rio) was helpful. He wanted our partnership to work. He wanted me to settle in. He would accompany me to town. He would talk to me every day in training, thinking about situations on the pitch. We would exchange thoughts about training. That is how we grew. In two-three years we knew what to expect from each other,” said Vidic fondly of his teammate.

His decade-long stay at Old Trafford saw him win 15 trophies.

When Ferguson signed Vidic in the winter of 2006, the gaffer had stated on MUTV: 'Good defenders win you things. This lad is really natural and athletic. You need good defenders and that is exactly what this lad is.'

Vidic tried to be true to ‘special’ Ferguson’s mantra to keep that trust.

“Now when I’m retired I realise what a job he has done. He always helped us improve -- teaching us to have right ethics in the game, how to better ourselves in training. He was a big influence not just in terms of football but also in life. He had one mojo in life: work hard, give your best and you won’t have any regrets in the end.

“He was right! In my entire career I tried to give my best. Sometimes you do well, sometimes someone will do better than you, but you know you gave your best. That is the most important thing. Sometimes I had friends in training who were much more talented than me but they never give 100 percent. That is why maybe I give more than them and that is why I achieved more.

"Fergie created a lot of young players. When I was struggling in my first six months, Fergie told me ,‘Don’t worry just enjoy,'.

Vidic revealed that of the titles he’s won at the club, the first UEFA Champions League Trophy (2008) and the first EPL trophy (2006) are his most cherished. But once targets were met, how would the club keep the motivation levels up?

Ferguson always had ways to keep his players on their toes, said Vidic, revealing an interesting anecdote.

“Ferguson always had challenges for his players. Sometimes he would bring new players to challenge your position in the team.

“He would also set targets. I remember, one season Ronaldo had scored 16 goals and Ferguson said, ‘let’s place a bet that next year you will score 25 goals’. Ronaldo was apprehensive, but Ferguson insisted and Ronaldo gave in. Ronaldo won that bet -- he scored over 30 goals the following season.

“He tried all these ways to motivate the players. At one time, Chris Smalling and Phil Jones arrive into the club. We were still at the peak of our form but we have these young, intelligent players ready to take our place. It was a hint to us to not be complacent.”

Fergie’s hairdryer treatment is legendary and Vidic reveals he was present when it was used. But he defended the ploy.

“When he shouted it was not to criticise the players but to lift them and to get the best out of them, to make them realise their mistake and improve on it. He had more trust in my abilities than I ever had in me. He trusted his players.

“I remember, when we played against players like (Sergio) Aguero, (Theo) Walcott, Fergie, speaking about those players, would say ‘he is quickish’, he would not say quick. He is asking you to do what you can do. His players know there is a reason why he said, what he did,” said Vidic, pulling out another episode from his vast memory of Old Trafford.

Veering the conversation to current football hero and former teammate Cristiano Ronaldo, he remembers guffawing at the Portuguese winger’s hopes.

“I remember when I came to United, he was not a very strong; he scored goals in all the chances he had. He always had that dream that he wanted to be the best player ever. We would always laugh at him when he told us that.

“But he wants to be best in the world, he is still chasing it. He is never satisfied. He is always working. He deserves everything he does because he is hard-working.” Talking about the current season, Vidic said the gap in points between the two Manchester teams was huge.

“Hope City don’t win. Tough for me to say this, but City are doing well this season. I still believe that we can improve and I thought in the beginning of the season that Manchester United cannot challenge for the title because in the beginning of the season we made a lot of changes. We brought a few defenders. We brought new strikers, (Paul) Pogba and (Nemanja) Matic in the middle, and now (Alexis) Sanchez coming as well. It will take time for players to settle and they have to adapt. They will be consistent in next 2-3 years.

“We have to respect that every manager has his own style. Mourinho is a manager who plays a certain way. Of course, he is phenomenal, but Manchester United was always about speed, strength, playing attacking football. Winning is most important. When you start winning you start believing. When you start believing you get more confidence and enjoy football. It’s not there at the moment. So I think we need some players to make it count.”

“Smalling is developing. He needs a partner.

“It hasn’t been easy for him. He moved from Fulham. [He played] three different styles of football under (David) Moyes, (Louis) Van Gaal, Mourinho. He’s improved. They will have more respect if United wins trophies.”

Vidic spends his free time post-retirement playing golf and tennis. The former defender, who retired in early 2016, is now taking the UEFA’s (European football association) coaching license course, but says there is still some time to go before he can become a manager.

“As a manager, I need to know what to do once I get a job. I’m trying to increase (my) skills. Managers need to have a different mentality than the players. You have to manage 25 players and all 25 are quality who want to play everyday.”