A round-up of Saturday's matches in the English Premier League. 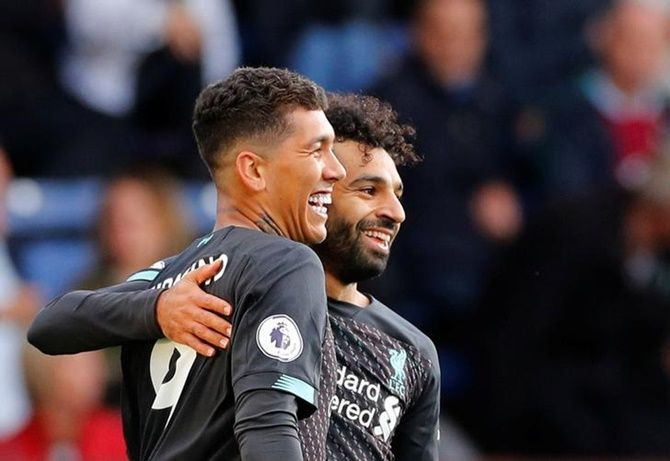 After Burnley started brightly, with forward Chris Wood forcing an early save out of Adrian, Liverpool got ahead in the 33rd minute, albeit in fortunate fashion.

Trent Alexander-Arnold's attempted cross from deep on the right hit the back of Wood and looped over Burnley keeper Nick Pope into the far corner.

If Sean Dyche's side felt luck was against them with the opener they had only themselves to blame when they handed Liverpool a second goal four minutes later.

Burnley skipper Ben Mee passed straight to Roberto Firmino, who burst forward and then slipped the ball left to Sadio Mane, who finished with precision into the bottom corner.

Firmino wrapped up the win nine minutes from the end, driving past Pope after good work from Mohamed Salah, who skipped past two challenges before setting up the Brazilian.

The club's previous record run was set between April and October 1990, when the team was managed by Kenny Dalglish. A double from Sergio Aguero, a first of the season for Kevin De Bruyne and another from Bernardo Silva steered Manchester City to a comprehensive 4-0 home win over Brighton & Hove Albion in the Premier League on Saturday.

City wasted no time in getting themselves in front as De Bruyne fired home after 68 seconds, and City's 17th win in their last 18 league matches never looked in doubt.

There was a worrying sight for City as Aymeric Laporte was carried off on a stretcher after upending Brighton's Adam Webster and coming off worse, but there was better news to come, as Aguero finished well to make it 2-0 in the 42nd minute.

Brighton had good chances to get themselves back in it either side of the interval, but they were made to pay for their profligacy in ruthless fashion by Aguero, who rifled into the top corner ten minutes into the second half.

Seconds after coming off the bench, Bernardo Silva then rounded off the scoring with City's 14th goal of the season, on the end of a pass from Aguero.

City coasted to a victory that moves them back to the top of the standings, with Liverpool in action later on Saturday.

"If we analyse the result it was 4-0 but few teams come here to play with this courage like Brighton," City manager Pep Guardiola said.

"Our players up front are incredibly good and they make the difference. Sergio will die scoring goals." 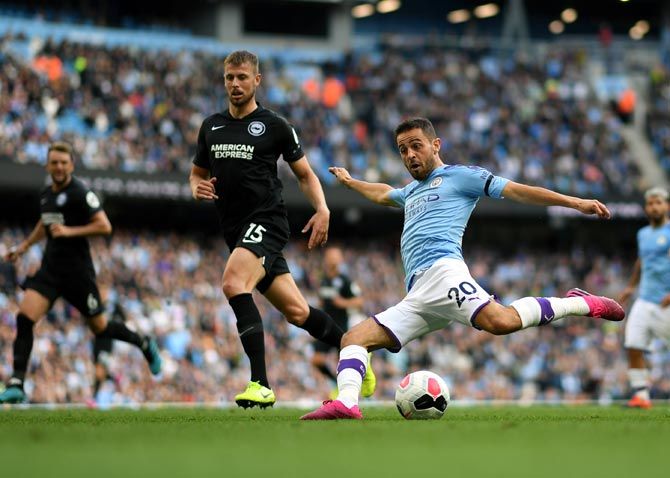 In their final match before the first international break of the season, City immediately clicked into gear with David Silva registering his 86th Premier League assist with a perfect pull back for De Bruyne.

Brighton could not contain City as De Bruyne then fired inches wide, before David Silva should have scored from close range.

With City momentarily looking a little ragged after Laporte's withdrawal, another fine, flowing move culminated in De Bruyne laying the ball across for Aguero, who took a touch out of his feet before doubling their advantage.

Brighton almost immediately struck back, but Ederson raced from his line to make a fine save to deny Leandro Trossard.

Normal service was resumed in the second half as David Silva again turned provider for Aguero’s sixth goal this season.

David Silva was replaced by Bernardo Silva, whose immediate involvement was to ride a challenge and fire into the bottom corner as City strolled to another three points.

"The boys were full of courage, brave, the effort was there," Brighton manager Graham Potter said. "They just lacked that clinical finishing in the final third." 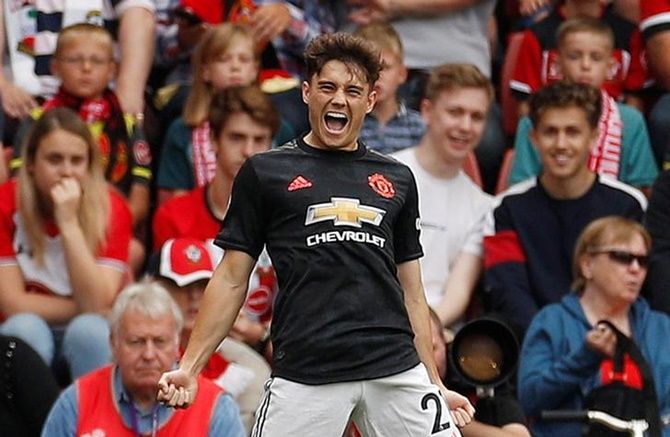 Manchester United's patchy start to the Premier League season continued with a 1-1 draw at 10-man Southampton after a Jannik Vestergaard header cancelled out a brilliant Daniel James goal for the visitors on Saturday.

The result left United on five points from four games after last weekend's shock 2-1 home defeat by Crystal Palace, while Southampton, who stretched their win-less league streak at home against United to nine games, have four points.

United boss Ole Gunnar Solskjaer conceded his team lacked the killer instinct in the opposition half but showed no signs of frustration after a third successive lacklustre performance following the opening 4-0 home win over Chelsea.

"We started well, got the game where we wanted it and that's where you have to score the second and the third and finish it off," Solskjaer told BT Sport.

"We weren't clinical enough. We had loads of chances, and the last bit is missing. It's getting there though.

"The three other games that we haven't won, we played better than against Chelsea.

"We are dominating and creating chances but haven't been clinical enough in front of goal to win games. We have missed penalties, chances - it's a dip in results but not in form."

Wales winger James, signed from Swansea City during the close season, netted the third goal of his fledgling United career when he beat Angus Gunn with a 10th-minute rocket into the top corner which gave the Saints keeper no chance.

It was almost a carbon copy of his goal against Palace and with the visitors dominating the opening half, the 21-year-old forced a reflex save from Gunn with another piledriver from 20 metres midway through the first half.

That effort came after striker Marcus Rashford, who endured another forgettable afternoon, headed well wide of the near post from close range.

United faded after the break and Vestergaard equalised in the 58th minute when he rose above Victor Lindelof to head home emphatically a Kevin Danso cross from the right, moments after visiting keeper David De Gea tipped away a Danny Ings header.

The home side were forced to hang on in the closing stages after Danso was sent off in the 73rd minute for a second bookable foul when he hacked down Scott McTominay, with Gunn denying Rashford and substitute Mason Greenwood. Chelsea threw away a two-goal lead to draw 2-2 with newly promoted Sheffield United on Saturday, leaving Frank Lampard still looking for his first home win as manager of the Blues, and for ways to stop leaking goals.

Chelsea striker Tammy Abraham got his name on the score-sheet at Stamford Bridge for the first time with two first-half goals to the delight of the home fans who hope he will be the answer to Chelsea's long wait for a reliable centre forward.

Abraham, one of several players from Chelsea's youth academy given their chance by Lampard, slotted home in the 19th minute when Sheffield keeper Dean Henderson failed to gather the ball under pressure from Christian Pulisic.

Abraham doubled Chelsea's lead in the 43rd minute when he capitalised on a defensive mix-up, seemingly putting the Blues on course for a second win of the season.

But the visitors, back in the Premier League for the first time since 2007, struck back immediately after half-time when defender Enda Stevens stormed down the wing and swung in a cross that Callum Robinson converted with a glanced shot.

Chelsea, who conceded two equalisers away to Norwich City last weekend before eventually winning 3-2, looked increasingly nervous and the Blades could have equalised before Chelsea defender Kurt Zouma scored an own goal from a Robinson cross in the 89th minute.

Chelsea also failed to hold on to a lead in a 1-1 draw against Leicester City in their first home game of the season and Lampard is likely to turn to central defender Toni Rudiger who is close to recovering full fitness after an injury.

But Lampard, Chelsea's all-time top scorer as a player, refused to blame his backline, saying the team as a whole lacked concentration.

"I am confident and trust completely the four centre backs we have," Lampard said. "We are just in a moment now where we obviously need to stop conceding goals."

Lampard gave a chance to two other players who emerged from Chelsea's youth programme, with Fikayo Tomori starting for the first time in the centre of defence and 18 year-old midfielder Billy Gilmour coming on for his debut as a substitute.

But Chelsea clearly missed influential France midfielder N'Golo Kante who was out for a second match due to injury.

Sheffield manager Chris Wilder praised his players, many of whom are newcomers to the top flight of English football, for not being overawed by the visit to Stamford Bridge.

"Three years ago we were bottom of League One and we now plying our trade and going toe-to-toe in the Premier League," he said.

"The players need to believe a little bit more...We deserve to be in this division from what we have done." 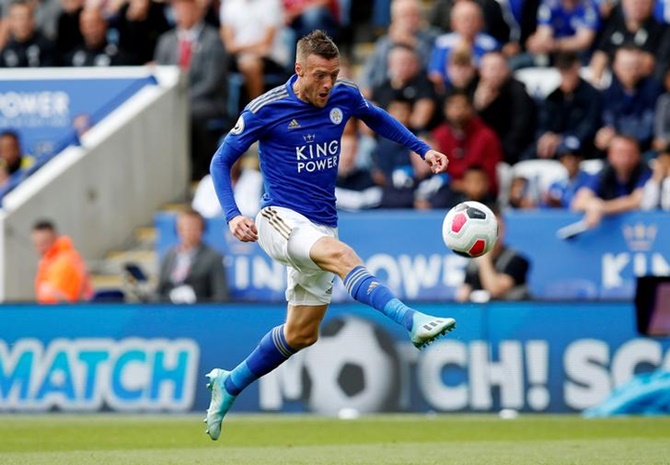 Leicester City striker Jamie Vardy was involved in all three goals as Brendan Rodgers' side beat Bournemouth 3-1 in an end-to-end contest at the King Power Stadium in the Premier League on Saturday.

Vardy opened the scoring in the 12th minute when he took advantage of Bournemouth's high line to break the offside trap and latch onto Ben Chilwell's long ball, lobbing the ball over goalkeeper Aaron Ramsdale who was caught in no man's land.

But the hosts' lead lasted only three minutes after Bournemouth's Ryan Fraser slipped the ball through to find striker Callum Wilson, whose shot from an acute angle beat Kasper Schmeichel and trickled into the goal at the far post.

Vardy then turned provider for Leicester's second, beating Steve Cook on the right side of the box on the dribble before playing the ball across goal for midfielder Youri Tielemans who restored the lead with a simple tap-in.

In the second half, Leicester's persistence in the press paid off when James Maddison nicked the ball off the Bournemouth back line and the ball fell to Tielemans, whose pass back into the box was taken first time by Vardy to make it 3-1.

The result saw Leicester, who are yet to lose a league game this season, move temporarily up to third in the standings with eight points after four games.

© Copyright 2021 Reuters Limited. All rights reserved. Republication or redistribution of Reuters content, including by framing or similar means, is expressly prohibited without the prior written consent of Reuters. Reuters shall not be liable for any errors or delays in the content, or for any actions taken in reliance thereon.
Related News: Manchester United, Southampton, Daniel James, Chelsea, Ole Gunnar Solskjaer
SHARE THIS STORYCOMMENT
Print this article 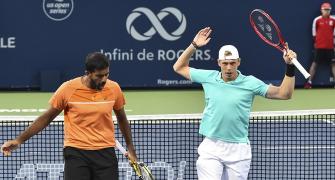 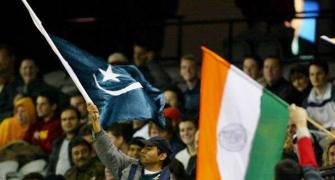 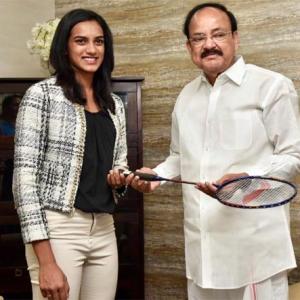