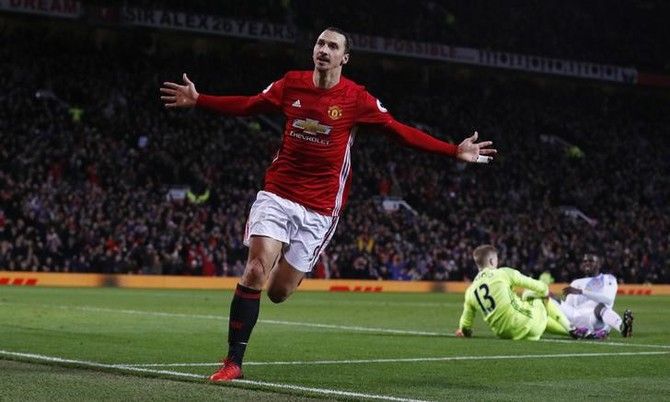 Manchester United stretched their unbeaten run to 11 games in all competitions after Daley Blind, in-form striker Zlatan Ibrahimovic and substitute Henrik Mkhitaryan gave them a 3-1 home win over Sunderland on Monday.

Left back Blind fired United ahead with a crisp 39th-minute shot after Ibrahimovic teed him up perfectly. The towering Swede doubled the lead with a clinical 82nd-minute finish for his 17th goal of the season.

Fit-again Mkhitaryan put the icing on the cake with a spectacular backheel effort after a sharp Ibrahimovic cross from the right, although television replays suggested the Armenian was marginally offside. Striker Fabio Borini gave Sunderland fans something to cheer with a dipping late volley. 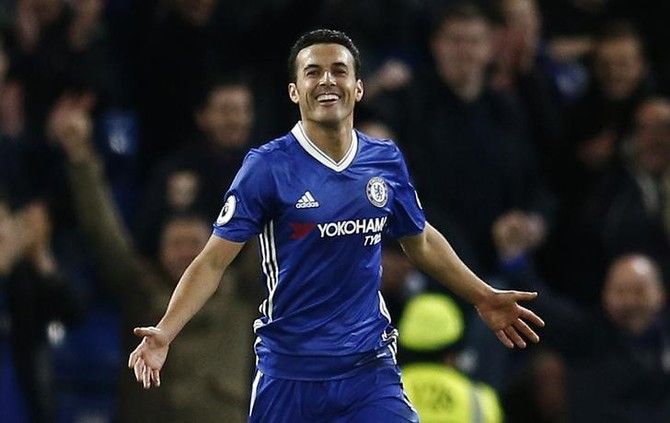 A supremely confident Chelsea notched a club record 12th consecutive league win on Monday to move nine points clear at the top of the Premier League, two goals from Pedro and one from Eden Hazard giving them a 3-0 victory over Bournemouth.

It took the energetic Pedro until the 24th minute to score, set up by Cesc Fabregas after jinking interplay between the Spanish players, Hazard, Willian and Nemanja Matic. He deftly lofted the ball over Artur Boruc, stranded in the Bournemouth goalmouth.

Captain Simon Francis brought down a sashaying Hazard in the Bournemouth area in the 49th minute and the Belgian converted the penalty for his 50th Premier League goal.

Chelsea, who have conceded only two goals on their winning run under Antonio Conte and scored 27, added the third in stoppage time when Pedro's surging run ended with the ball deflected into the goal. Olivier Giroud made the most of his first league start of the season by heading Arsenal to a 1-0 win over West Bromwich Albion on Monday and avoiding a third game without victory for Arsene Wenger's side.

Goalkeeper Ben Foster had repeatedly frustrated the hosts in a dominant second-half display but France international Giroud finally found a way through by nodding Mesut Ozil's arched cross beyond him in the 86th minute.

Giroud's fourth league goal of the season lifted Arsenal third in the standings, level on 37 points with Liverpool who play Stoke City on Tuesday, but they are still nine behind leaders Chelsea.

Arsenal came alive after the break following a timid first- half display but kept coming up against the heroic Foster, who denied Alex Iwobi and Alexis Sanchez, who also rattled the post. 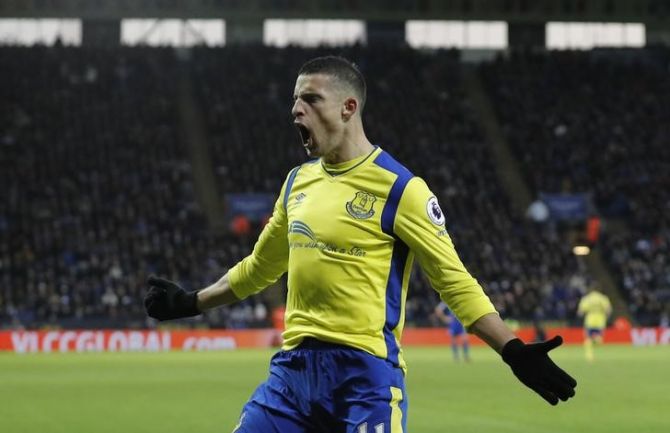 Champions Leicester continued their slide towards a New Year Premier League relegation fight as they were beaten 2-0 at home by Everton on Monday despite dominating the match.

Everton, still stinging from their stoppage-time derby defeat by Liverpool last week, created almost nothing until Kevin Mirallas ran on to a long clearance from goalkeeper Joel Robles and scored with a deflected shot six minutes into the second half.

Leicester looked toothless without the suspended Jamie Vardy but the striker at least joined in the festive fun by donning one of 30,000 Jamie Vardy masks produced by the club and worn by fans in protest at his ban following a red card.

There were precious few smiles among the home supporters at the end, however, as, after Idrissa Gueye blazed over the bar for the visitors, Romelu Lukaku finished off another counter attack with a crisp shot to make it 2-0 in stoppage time. Struggling Swansea City slumped to a third consecutive loss as West Ham United put further distance between themselves and the Premier League relegation zone with a comfortable 4-1 victory at the Liberty Stadium on Monday.

Home keeper Lukasz Fabianski's mistake allowed former Swansea player Andre Ayew to put West Ham ahead after 13 minutes and the nearest Swansea came to equalising before the break was Gylfi Sigurdsson's free kick that was saved by Darren Randolph.

West Ham doubled their advantage in the 50th minute when defender Winston Reid met Dimitri Payet's corner with a header that gave Fabianski no chance.

Second-bottom Swansea had plenty of possession but West Ham were defensively solid and Michail Antonio put the result beyond doubt when he turned in Havard Nordtveit's shot.

Fernando Llorente grabbed a late consolation for the hosts but there was still time for Andy Carroll to embellish a third consecutive win for the Hammers.

The result lifted Everton up to seventh and left the champions two places and three points above the relegation zone.

Palace draw at Watford in first game under Allardyce

Crystal Palace began life under Sam Allardyce with a 1-1 draw at Watford on Monday though they could easily have won an evenly-balanced Premier League game but for a missed Christian Benteke penalty.

Palace had the best of the first half and went ahead after 26 minutes when winger Andros Townsend's incisive run and neat inside pass set up Yohan Cabaye to turn the ball into the net first time.

The visitors missed the chance to double the lead 10 minutes later when Heurelho Gomes saved a softly-struck Benteke penalty that he had given away himself when hacking down the striker.

Watford had barely threatened in the first half but were rewarded for their improvement when Troy Deeney slammed in from the spot after 71 minutes after Damian Delaney had hauled down Sebastian Prodl at a corner. It was Deeney’s first goal for three months – and his 100th for the club.

Both sides then looked happier to hold on to a point than risk going for all three and for Allardyce, in particular, it was a satisfying, if frustrating start.

"That was two points dropped for me," he told Sky Sports. "In some ways it was encouraging, away from home in my first game but on the balance of chances created it should have been a victory."

Allardyce, sacked by England in September after a newspaper sting, was appointed on Friday following the dismissal of Alan Pardew after a dire run that has left Palace one place above the relegation zone.

"If we keep that sort of level up then hopefully we'll turn performances into victories," he said.

"We played very well today, especially in the first half, and it's our own fault we haven't got three points."

Striker Andre Gray gave Burnley 1-0 home win over Middlesbrough in the first-ever Premier League meeting between the sides on Monday to lift his team above their rivals into 14th place in the table.

Gray's goal, his second of the season, came in the 80th minute when he lashed a Sam Vokes flick-on at Victor Valdes, with the goalkeeper getting two hands to the shot but unable to keep it from trickling over the line.

Burnley also edged the first half, with winger George Boyd stinging Valdes' palms with a free kick and the home side also had a penalty appeal turned down after the ball struck Calum Chambers' arm.

The game was keenly contested by both sides and interspersed by a series of niggling fouls that had referee Craig Pawson reaching for his pocket at regular intervals and showing 11 players yellow cards.

© Copyright 2021 Reuters Limited. All rights reserved. Republication or redistribution of Reuters content, including by framing or similar means, is expressly prohibited without the prior written consent of Reuters. Reuters shall not be liable for any errors or delays in the content, or for any actions taken in reliance thereon.
Related News: Chelsea, Swansea, Olivier Giroud, Pedro, Watford
SHARE THIS STORYCOMMENT
Print this article