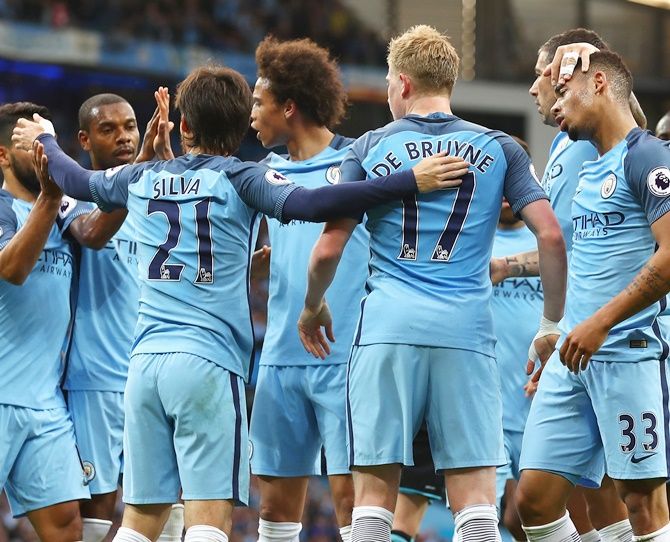 Manchester City moved back into third place and almost guaranteed Champions League qualification thanks to a 3-1 home victory against West Bromwich Albion on Tuesday at the Etihad Stadium.

They were frustrated for nearly half an hour but struck twice in two minutes, first when Gabriel Jesus tapped in from Kevin de Bruyne's cut-back and then when Jesus turned provider to set up De Bruyne who curled a shot past Ben Foster.

Yaya Toure finished off another slick City move in the 57th minute following a one-two with Sergio Aguero.

City need just a point from their final game away to Watford to make absolutely certain of a top-four finish.

One of the biggest cheers of the night was when substitute Pablo Zabaleta came on just past the hour to replace David Silva. The club announced this week that the 32-year-old Argentine right back will leave at the end of the season after nine years at City in which he twice won the title.

The mood was slightly dampened late on when West Brom grabbed a late consolation from Hal Robson-Kanu.

With one game to play, City have 75 points to fourth-placed Liverpool's 73.

Arsenal, in fifth have 72, and could only catch City if Pep Guardiola's side lost to Watford on the final day and Arsenal beat Everton and there was a five-goal swing in goal difference. 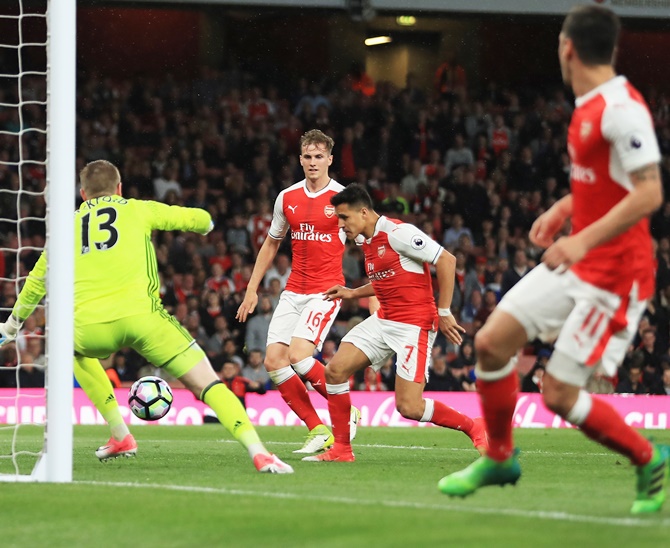 The race for the final two tickets to next season's Champions League will go to the wire after Arsenal retained their slim hopes of finishing in the Premier League's top four thanks to a late burst from Alexis Sanchez against Sunderland on Tuesday.

Arsenal's 2-0 win meant that Manchester City, 3-1 winners at home against West Bromwich Albion, will still need a point to be absolutely certain of finishing in the top four.

Pep Guardiola's City moved back into third spot, above Liverpool, thanks to goals by Gabriel Jesus, Kevin de Bruyne and Yaya Toure in their final home game of the season.

City are in third spot with 75 points, Liverpool have 73 and Arsenal 72. City face Watford away in Sunday's final round of fixtures with Arsenal at home to Everton and Liverpool taking on already-relegated Middlesbrough at Anfield.

Arsenal's fourth consecutive victory at least gives them some hope of a 21st successive top-four finish, although matters are not in their own hands.

It could have been even worse for the Gunners on a frustrating night at a sparsely-populated Emirates.

Relegated Sunderland were showing some surprising resilience but Sanchez broke the deadlock in the 72nd minute, finishing off a flowing move by converting Mesut Ozil's pass.

The Chilean then bundled in a second from Olivier Giroud's cut-back to take his league tally for the season to 23 -- just one goal behind the league's leading scorer Romelu Lukaku.

While City need just a point to guarantee finishing above Arsenal, Arsene Wenger's Gunners could potentially take advantage of any Liverpool jitters.

"We made 71 points and were second. We now have 72 and want to go to 75. After that you deal with what happens," Arsenal boss Arsene Wenger said, referring to the fact that his side have more points than they managed as runners-up in 2015-16.

"We've got in on the final day many times. Sunderland fought and you want that in the Premier League -- that's what you want from every team."

Wenger was again asked about his future.

"At the moment let's focus. We have a big game again on Sunday and then an FA Cup final -- let's sort that out first."

City took 27 minutes to break down West Brom but then scored twice in two minutes with Jesus first being set up by De Bruyne and then returning the compliment.

Toure made the points safe before Pablo Zabaleta, playing his last game at the Etihad after nine years with the club, came on to a huge ovation from the home faithful.

City look almost certain to achieve the bare minimum of a top-four place and could only finish below Arsenal if they lost at Watford, Arsenal won and there was a five-goal swing, with Wenger's side scoring more than City on the day.

"We are in third position so it's in our hands," Guardiola, who will finish a season trophy-less as manager for the first time, said. "We go to Watford to win the game."