'If 11 men can't defend their goal for two minutes, then you will get punished' The visitors had fought back from 3-1 down to lead 4-3 after 90 minutes but Norwich central defender Sebastien Bassong's fierce drive looked to have earned the home side a point before Lallana bundled the ball into the net with seconds remaining.

Liverpool took the lead after 19 minutes when Roberto Firmino's scuffed strike found the corner of the net but Dieumerci Mbokani equalised with an audacious back-heel after Liverpool failed to deal with a corner on the half-hour.

Steven Naismith, making his Norwich debut after joining from Everton, beat Liverpool goalkeeper Simon Mignolet with a fierce shot from a narrow angle before halftime and Wes Hoolahan converted a penalty to give the hosts a two-goal cushion.

The unmarked Jordan Henderson then pulled one back for Liverpool with a low shot and Firmino's deft finish from Lallana's cross levelled the scores before James Milner slotted in following a dreadful back pass from Russell Martin.

"A strange afternoon. I was just delighted to get the three points in the end," Lallana told BT Sport.

"When they scored you just think it's going to be one of those days. A massive three points for us.

"That goal was one of those moments in your career that just happens, you go with the flow."

Liverpool manager Juergen Klopp celebrated wildly with his players after the final whistle and his glasses were accidentally knocked off by Christian Benteke in the melee.

"Unbelievable game," Klopp said. "We had a lot of problems today but we played football and scored beautiful goals.

"I think we were the deserved winners in a spectacular game. Of course we were lucky, but we were not too lucky when they equalised in added time. It is very emotional."

It was only the fourth Premier League match to finish 5-4.

"Defensively, it was very poor and that is what cost us," Naismith said. "If 11 men can't defend their goal for two minutes, then you will get punished." Leicester's adventures in Premier League wonderland continued as Jamie Vardy rediscovered his goalscoring touch in a deserved victory over Stoke that thrust them to the top of the table.

Vardy, unstoppable earlier in the season, had gone six league games without a goal but struck with a brilliant effort midway through the second half, latching on to Danny Drinkwater's pass and rounding goalkeeper Jack Butland to slot the ball into an empty net.

Drinkwater had earlier put Leicester ahead with a rare goal just before halftime, his deflected strike being the first Leicester have scored from outside the box all season and a just reward for the home side's domination at the King Power Stadium, where they remain unbeaten in the league this season.

Substitute Leonardo Ulloa finished the rout with an 88th- minute tap-in to embellish Leicester's extraordinary record of having been defeated just once in 16 league games and to put them three points clear of Arsenal who could reclaim top spot if they beat Chelsea on Sunday. 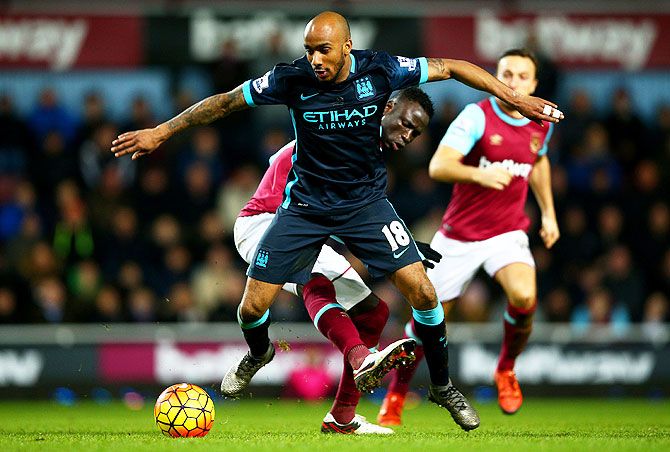 Leicester's day then got better as Manchester City were held 2-2 in a lively late kickoff at West Ham United -- Sergio Aguero earning his side a point after City twice trailed.

Leicester have 47 points, City and Arsenal, who play Chelsea on Sunday, 44 with fourth-placed Tottenham Hotspur in the hunt after a 3-1 victory at Crystal Palace moved put them on 42.

Manchester City's league away form continues to be a worry.

They have won only one of their last seven on the road and were fortunate to escape Upton Park with a point after the hosts twice led through Enner Valencia.

"It (a draw) was not what we wanted before the game," City boss Manuel Pellegrini told Sky Sports, although he was at least heartened by Aguero now operating at 100 percent. Manchester United stayed in fifth place, one point above West Ham, but it was another depressingly dull day at Old Trafford where United were booed off after losing 1-0 to Southampton.

Charlie Austin made a glorious start to his Southampton career when the striker's superb late header earned the visitors a 1-0 win over a listless Manchester United.

The 26-year old Austin, who joined the Saints from Queens Park Rangers last week, hammered the ball past keeper David De Gea after an inviting cross.

Southampton repeated their success in the corresponding fixture last season when a Dusan Tadic goal gave them their first league victory at Old Trafford in 27 years.

Their afternoon was summed up by several harmless efforts by lone striker Wayne Rooney.

"You can't say the fans are not right," Van Gaal told Sky Sports.

"They are disappointed and have a right to boo." Tottenham Hotspur teenager Dele Alli scored a contender for goal of the season when he lifted the ball over his head and volleyed home as they came from behind to win 3-1 at Crystal Palace.

The 84th minute goal, watched by England manager Roy Hodgson, put Spurs in front for the first time after Harry Kane had equalised with a thundering a header past goalkeeper Wayne Hennessey. Tottenham substitute Nacer Chadli added a third with a long-range strike in stoppage time.

Palace, who had not scored in their five previous league matches, finally got on the scoresheet when Spurs' Belgium defender Jan Vertonghen diverted a cross past his own keeper Hugo Lloris to give the hosts the lead on the half-hour.

Palace hit the bar twice in five seconds through Scott Dann and Mile Jedinak in the second half before Alli did the same in the closing minutes after scoring with his sensational strike. Bottom club Aston Villa remain six points adrift of the rest after a 0-0 draw at West Bromwich Albion, 19th-placed Sunderland drew 1-1 at home to Bournemouth while third-bottom Newcastle United went down 2-1 at Watford.

Sunderland fought back to earn a crucial 1-1 draw with Bournemouth in a dour Premier League relegation battle.

Benik Afobe gave Bournemouth the lead with his first goal for the club, heading home firmly after 13 minutes, and Patrick van Aanholt equalised just before halftime, firing home a fierce shot from a tight angle to score for the fourth game in a row.

Lewis Grabban missed a great chance to win it for Bournemouth but Sunderland remained second-bottom of the standings, six points behind their opponents.