Images from the English Premier League matches played on Wednesday. 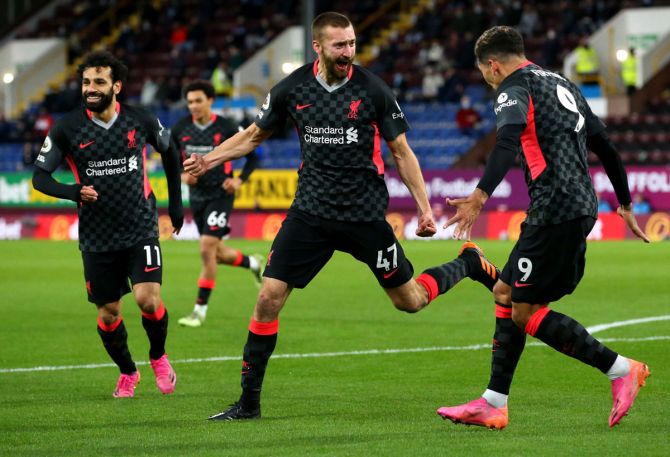 IMAGE: Nathaniel Phillips, centre, celebrates with teammates after scoring the second goal for Liverpool during their English Premier League match against Burnley at Turf Moor in Burnley, on Wednesday. Photograph: Alex Livesey/Getty Images

Liverpool moved into the Champions League qualifying spots after a 3-0 win at Burnley on Wednesday took them above Leicester City and into fourth place with one round of Premier League matches remaining.

Roberto Firmino struck two minutes before halftime and a Nathaniel Phillips header made it 2-0 in the 52nd minute before a superb late strike from Alex Oxlade-Chamberlain secured a fourth straight win.

The victory moves Liverpool onto 66 points, ahead of fifth-placed Leicester on goal difference while Chelsea are third on 67 points.

Despite having little to play for other than pride, Burnley, who are now in 17th place, responded to the return of fans at Turf Moor with an aggressive start to the game.

Chris Wood struck the side netting from a promising position and the Clarets were first to the ball across the field in the opening exchanges.

But Liverpool wasted two good opportunities with Thiago Alcantara and Mohamed Salah both off target after finding space in the box.

Burnley winger Dwight McNeil brought a good save out of Liverpool keeper Alisson Becker with a 25-metre drive but it was the visitors who made the breakthrough. 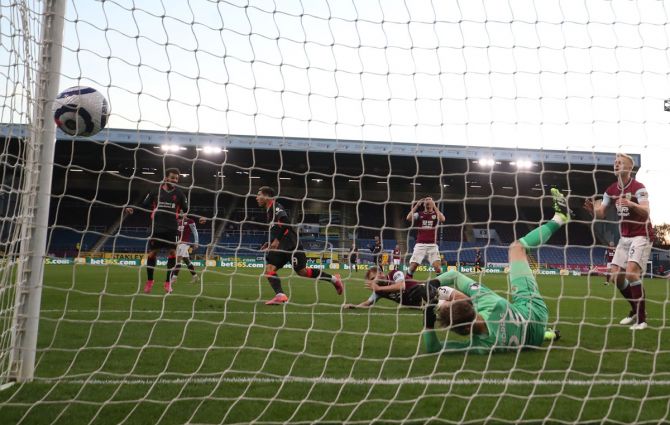 Sadio Mane fed Andy Robertson on the left and his low cross was expertly slotted home by Firmino, the Brazilian looking confident again after his two goals at Manchester United last week.

Phillips eased any lingering Liverpool nerves with a firm header at the back post from a Mane cross from the left but he had to be alert at the other end to clear a Ben Mee header off the line as Burnley looked for a way back into the game.

A fine individual effort from substitute Oxlade-Chamberlain wrapped up the win in the 88th minute, the former Arsenal midfielder twisting to find space for a fierce low drive past Will Norris.

Juergen Klopp's side face Crystal Palace at Anfield on Sunday while Chelsea are at Aston Villa and Leicester are at home to Tottenham Hotspur.

"We feed off pressure. It's a massive club and fans demand results," said Robertson.

"We have hit form at the right time. Sunday is a final effectively for us, Leicester and Chelsea. We have given ourselves a chance when a lot of people had written us off. But we need to make sure our performance is of the highest level (against Palace)." Tottenham Hotspur's European hopes were dealt a huge blow as their final Premier League home game of the season ended in a 2-1 defeat by Aston Villa on Wednesday and striker Harry Kane perhaps waving a farewell to the club's fans.

England captain Kane's uncertain future has left Spurs fans wearing a frown in the past week and their mood was hardly raised as a horrible own goal by Sergio Reguilon and an Ollie Watkins strike earned Villa the win.

Tottenham now face the ignominious prospect of being in the inaugural version of UEFA's third-tier Europa Conference League next season at best, having reached the Champions League final in 2019.

Defeat at Leicester City in their final game on Sunday could even see them finish as low as ninth and facing the prospect of no European football at all next season.

Kane, who has scored 220 goals from 335 in all competitions for Tottenham, including 22 this season in the Premier League, was a subdued figure on Wednesday and forced only one save from Villa's Emiliano Martinez.

After the final whistle, a glum-looking Kane walked slowly around each side of the pitch on his own, receiving warm applause from fans, a few of whom waved goodbye.

Tottenham's fans had sung "we want Levy out" during the game, aimed at the club's chairman Daniel Levy who admitted in a message to fans in the match programme that the club had "lost sight" of key priorities.

They continued anti-Levy chants after the final whistle with fans refusing to leave and some scuffling with stewards as they waited for the players to re-appear for a lap of honour. "I'm very disappointed. It wasn't how we wanted to finish the season at home in front of our fans," Mason said.

"There are so many emotions in football. Yes a lot has been going on but our aim is to get results on the pitch and unfortunately we didn't do that."

The match proved a microcosm of Tottenham's season in which they led the Premier League standings in December.

When Steven Bergwijn seized on a Villa mistake to unleash a fierce shot into the roof of the net after eight minutes the mood was briefly buoyant among the 10,000 fans back inside the stadium for the first time this year.

But the optimism was an illusion.

After 20 minutes Reguilon was faced with a routine clearance but got in a terrible tangle and sliced spectacularly past his diving keeper Hugo Lloris.

Reguilon's night went from bad to worse when his loose pass after 39 minutes was deflected into the path of Watkins who shrugged off Eric Dier before firing inside the post.

Tottenham's confidence drained away and mistakes by Harry Winks and Dier should have been punished.

The hosts were booed off at halftime and things did not improve after the break. Bergwijn and Kane had chances and Gareth Bale came off the bench for what was probably his Tottenham farewell to try and liven things up.

But Villa spurned numerous chances to increase their lead, substitute Carney Chukwuemeka hitting the post in stoppage time, and as the whistle blew, more boos rang around the huge stadium.

"It's an emotional game. Our fans care. I care, so I've no problem with fans being disappointed," Mason said. Arsenal snatched a 3-1 win away to Crystal Palace in the Premier League on Wednesday thanks to stoppage-time goals from Gabriel Martinelli and Nicolas Pepe, keeping up their slim hopes of playing European football next season.

The late goals spoiled Roy Hodgson's final home game after four years in charge of hometown club Palace but delighted Arsenal coach Mikel Arteta, who celebrated a fourth consecutive league win which gives his side a fighting chance of sneaking into the new UEFA Conference League next season.

Arsenal's record signing Pepe gave the visitors the lead against the run of the play 10 minutes before halftime, stabbing home a Kieran Tierney cross after the fullback had been released by a slick backheel from Bukayo Saka.

Palace levelled in the second half when Christian Benteke headed home an Andros Townsend free kick shortly after the hour mark to give the home fans a moment to savour in their first game back this year and their second since the coronavirus pandemic disrupted live sport in March 2020.

Palace looked the most likely side to go on and take all three points and Wilfried Zaha had a great chance to snatch a late winner but could not dribble past keeper Bernd Leno and Arsenal had the ball in the net moments later with a scrappy finish from substitute Martinelli.

Pepe then clinched the win for Arsenal by slotting low into the net with practically the last kick of the game after bursting through the hosts' defence.

Arsenal remain ninth in the standings although the win took them on to 58 points with one game left. Palace are 13th on 44 points.

Arsenal host Brighton & Hove Albion in their final game with a chance to qualify for Europe, needing a victory and for Tottenham Hotspur and Everton to fail to win their games, away to Leicester City and Manchester City respectively.

West Ham close in on Europa League spot with win West Ham's Declan Rice struck the post with a penalty in the opening minute and the visitors fell behind after 27 minutes when Matheus Pereira's corner went in off Tomas Soucek.

Big Czech Soucek made amends, however, by equalising in first-half stoppage time.

Ogbonna bundled West Ham in front in the 82nd minute before Antonio wrapped up the points six minutes later.

West Ham moved into sixth spot on 62 points, three ahead of Tottenham Hotspur and Everton, with one game left.

One point against Southampton on Sunday would secure West Ham a place in next season's Europa League and their highest top-flight finish since they ended fifth in 1999.

West Brom manager Sam Allardyce, who took charge in December after Slaven Bilic was sacked, confirmed after the game that he would step down at the end of the season.

West Ham's bid for an unlikely top-four finish had fizzled out after a run of one win in five league games before their trip to a West Brom side managed by their old boss.

Tottenham's earlier defeat at home by Aston Villa opened the door for David Moyes' side and they are now tantalisingly close to a return to European competition for the first time since they were involved in the Europa League in 2016.

"We have been playing really well but tonight we did not play really well, but it shows we can win in other ways," Moyes, in his second spell as West Ham boss, told reporters.

"I am delighted but it is not done. I will go away and sit back and enjoy it and look at the permutations, we have to win our game and then there is no danger."

When Rice smashed his penalty against the post and Pereira gave West Brom the lead it looked as though West Ham might squander their chance to take advantage of Tottenham's result.

Soucek scored from point-blank range in first-half stoppage time with his 10th goal of the season.

West Ham struggled to impose themselves after the break although Aaron Cresswell curled a sublime free kick against the outside of the post and Pablo Fornals wasted a chance.

Ogbonna was on hand to bundle in a corner in the 82nd minute to put West Ham in front and they sealed the points on the counter-attack as Jesse Lingard fed Antonio to score.

With their home fans roaring them on on Sunday, West Ham's European destiny is in their own hands.

"Overall we have earned it this year but we have a bit to do yet and hopefully we can get over the line," Moyes said.

© Copyright 2021 Reuters Limited. All rights reserved. Republication or redistribution of Reuters content, including by framing or similar means, is expressly prohibited without the prior written consent of Reuters. Reuters shall not be liable for any errors or delays in the content, or for any actions taken in reliance thereon.
Related News: Tottenham Hotspur, Burnley, Villa, Liverpool, Chelsea
COMMENT
Print this article 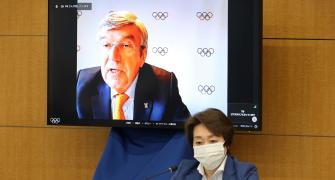 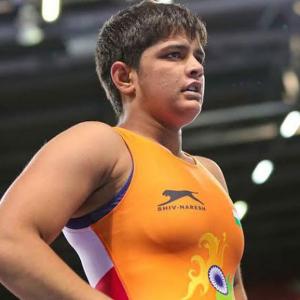