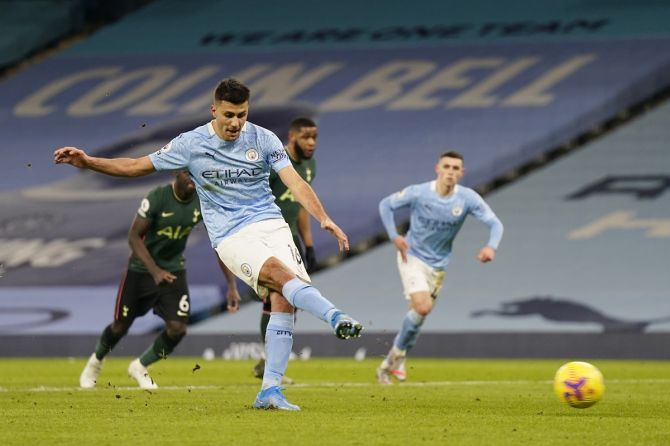 Manchester City's relentless march towards reclaiming the Premier League title continued with a 3-0 romp over Tottenham Hotspur after champions Liverpool capitulated at Leicester City to suffer a third consecutive defeat on Saturday.

The German took his tally to 11 league goals this season as he struck twice in the second half after Rodri's first-half penalty, following a foul on Gundogan by Pierre-Emile Hojbjerg, had given Pep Guardiola's side the lead.

Victory put City on 53 points, seven clear of second-placed Leicester, and with a game in hand.

The only slight worry for Guardiola, whose side have won 16 times in a row in all competitions, was that Gundogan was substituted in the 69th because of a tight groin. 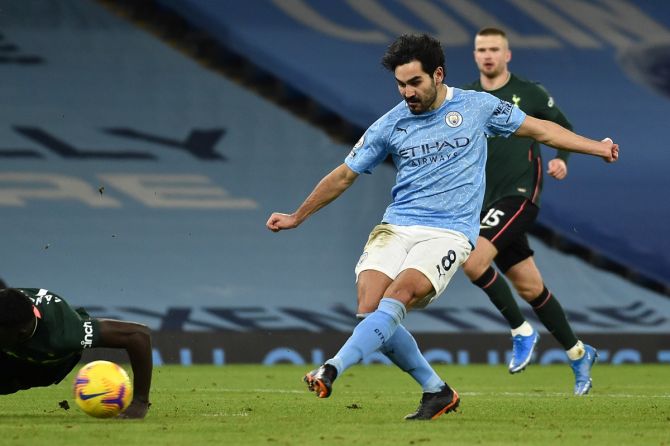 Although with striker Sergio Aguero among the City substitutes after an 11-game absence due to COVID-19 it left Guardiola a happy man.

"It was well deserved, they hit the post and that can turn the game but the way we wanted to play was there," Guardiola, said. "Tottenham have special quality, we have played well against them in the past and lost 2-0."

That 2-0 defeat at Tottenham in November put Jose Mourinho's side top of the league but the north London club's form has disappeared and they were outplayed on Saturday despite Harry Kane hitting the post with a free kick when it was 0-0.

Tottenham are ninth after losing four of their last five league games and Mourinho was left grasping at straws.

"We were punished by what I call the modern penalty," Mourinho said. "The penalty you cannot deny there was a contact but now in modern football every contact is a penalty."

Fourth-placed Liverpool's defeat left them 13 points behind City having played a game more and they are now in danger of dropping out of the top four. 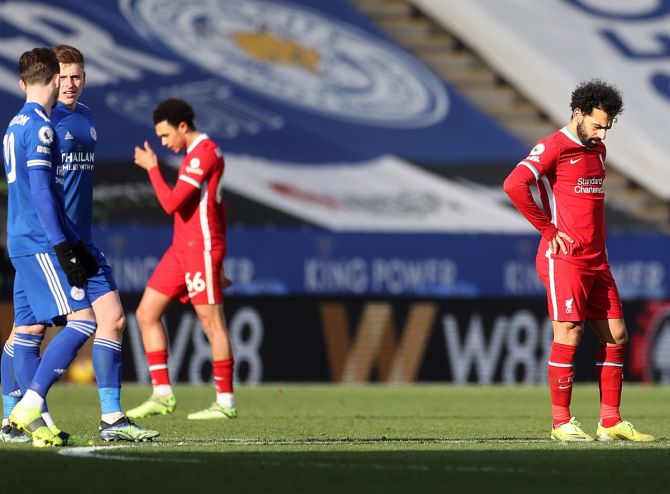 An error by Liverpool goalkeeper Alisson helped Leicester come from behind to earn a 3-1 win on Saturday, with the champions losing three successive Premier League games for the first time since November 2014, when they were managed by Brendan Rodgers.

Liverpool were forced into another defensive reshuffle due to Fabinho being injured, with January loan signing Ozan Kabak handed his debut. The 20-year-old's slip let Jamie Vardy in in the first half, only for the Leicester striker to hit the crossbar.

It was Trent Alexander-Arnold's turn to hit the woodwork from a free-kick just after the interval before Mohamed Salah finally broke the deadlock in the 68th minute after being set up by a superb Roberto Firmino backwards flick.

After VAR had overturned a penalty awarded to Leicester, James Maddison equalised from a free-kick, before Alisson, who made two glaring errors in Liverpool's loss to Manchester City last weekend, cost his side again.

The Brazilian came racing out of his goal to meet a long ball over the top but collided with Kabak and allowed Vardy in to score in the 81st minute.

Harvey Barnes made sure of the win four minutes later to complete another miserable afternoon for Liverpool, who have now won just two of their last 10 league games.

With Manchester United not in action until Sunday, Leicester jumped to second in the standings, while Liverpool sit fourth, 10 points off leaders City having played two games more. 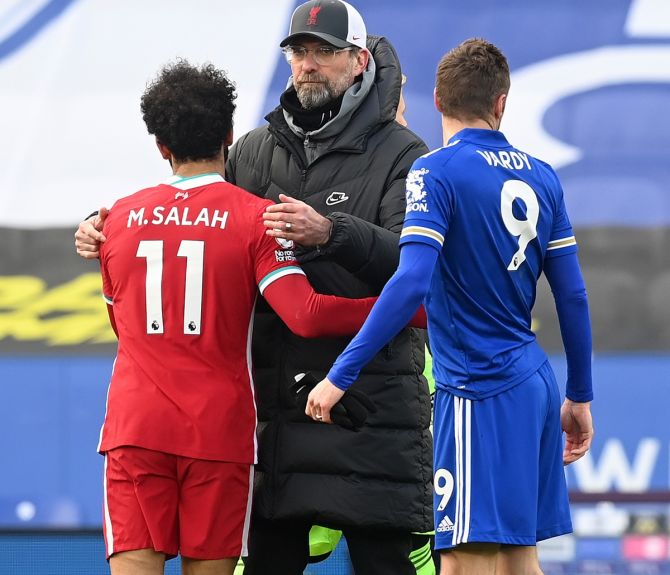 "The second goal is a misunderstanding," Liverpool boss Juergen Klopp told BT Sport. "Alisson had a super game and then at that moment he came out, I didn't hear him shouting."

"On the pitch we were the clear dominant side. We had chances and then we concede two goals."

The match started at a ferocious pace, and James Maddison almost caught Alisson off his line with an audacious effort from his own half early on. But the Liverpool keeper got back to make the save.

The injuries continued to pile up for Liverpool as James Milner had to be withdrawn, but the visitors remained a threat on counter, with Kasper Schmeichel, on his 100th consecutive Premier League appearance, in fine form.

After Alexander-Arnold’s perfectly flighted free-kick beat Schmeichel but not the frame of the goal, the chances continued to come, at both ends, before Salah finally made one count, scoring his 17th league goal of the season.

VAR had a long look at Maddison’s free-kick, which went through a sea of bodies into the net, before Alisson’s ill-fated rush of blood to the head that left Vardy with an open goal - his eighth career strike against Liverpool.

Barnes then made sure of the win with a fine finish.

"Whatever we are asking the players to achieve with important players missing they are doing," Rodgers told BT Sport. "There is a long way to go, we are not getting carried away with anything." 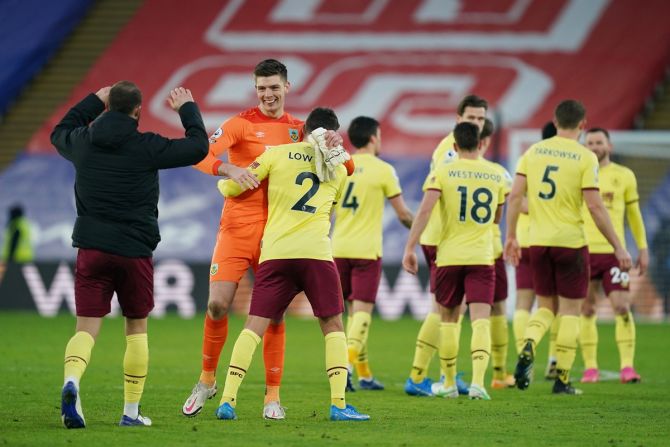 Burnley pulled further clear of the Premier League relegation zone with a 3-0 win at Crystal Palace moving them up to 15th place in the table.

Sean Dyche's side headed to Selhurst Park as the lowest scorers in the league but struck twice within the opening 10 minutes.

Johann Berg Gudmundsson fired the Clarets in front after the Palace defence failed to deal with an Erik Pieters cross and the Icelandic winger created space for himself before drilling a left-foot shot into the far corner.

Burnley doubled their advantage from a Dwight McNeil corner into a packed box, with Palace keeper Vicente Guaita unable to come out and claim the ball, allowing Jay Rodriguez to head home his first Premier League goal of the season.

Matt Lowton's first ever Burnley goal at this level made it 3-0 after the break, the full-back powering forward from the half-way line, finding Rodriguez inside and then volleying home the return pass.

There was a sour end to a fine performance from the visitors, though, when central defender Ben Mee was stretchered off with a serious concussion head injury.

Burnley are now on 26 points, 11 above 18th-placed Fulham who occupy the highest of the relegation spots. Palace are in 13th place on 29 points.

© Copyright 2021 Reuters Limited. All rights reserved. Republication or redistribution of Reuters content, including by framing or similar means, is expressly prohibited without the prior written consent of Reuters. Reuters shall not be liable for any errors or delays in the content, or for any actions taken in reliance thereon.
Related News: Leicester, Liverpool, Alisson, VAR, Jamie Vardy
SHARE THIS STORYCOMMENT
Print this article 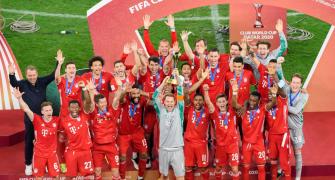 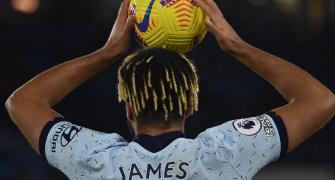 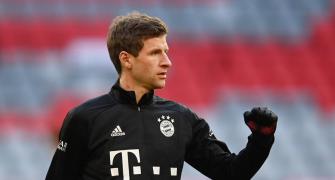 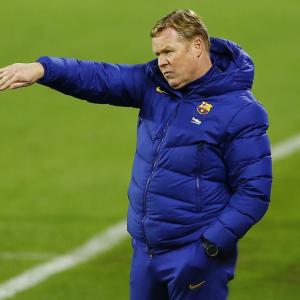