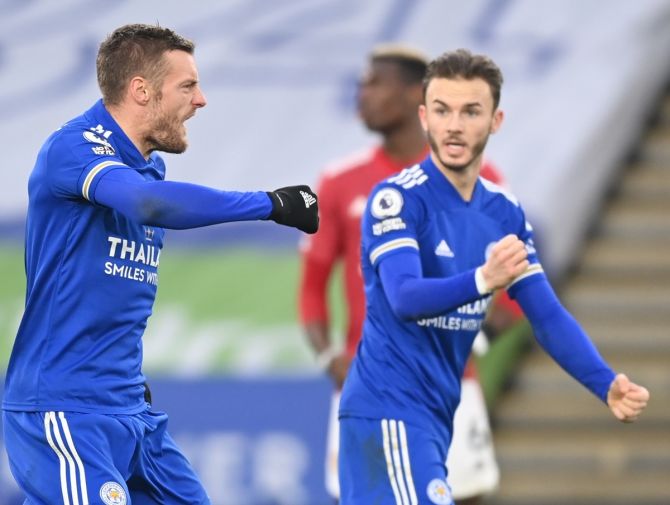 Leicester City came back twice to end Manchester United's away winning streak in the Premier League with a 2-2 draw at the King Power stadium on Saturday.

A Jamie Vardy shot which deflected off United defender Axel Tuanzebe, five minutes from the end, secured a point for Brendan Rodgers' side after Bruno Fernandes appeared to have secured another victory on the road for United.

Ole Gunnar Solskjaer's side, who had won their last ten away games in the Premier League, stay third on 27 points, a point behind second-placed Leicester.

Liverpool are top of the standings on 31 points and have a chance to extend their lead when they face West Bromwich Albion on Sunday.

Marcus Rashford had missed a wide-open header but put United ahead in the 23rd minute with a cool finish after being slipped in by Fernandes before Harvey Barnes equalised eight minutes later with a fine shot from the edge of the box.

Rashford had a great chance to put United back in front on the hour but his powerful drive was well saved by the right hand of Kasper Schmeichel.

Two minutes later Anthony Martial had an effort disallowed for offside but the influential Fernandes restored United's lead in the 79th minute, drilling into the bottom corner after being found inside the area by substitute Edinson Cavani.

Again though, the lead was short-lived as Vardy's first time shot on the half-turn from a low cross from Ayoze Perez, went in off Tuanzebe and earned a point for the Foxes.

"Disappointed we didn't win today because we had loads of big chances and we could've finished it off but they're a dangerous side," said Solskjaer.

"One point is not the worst result but we're disappointed to not get the three points against a tough side," he added.

Rodgers praised the way his team had approached the game and responded to the two United goals.

"I thought it was a good game - two attacking teams and I thought we had lots of really good play. Our defending and counter pressing was very good you have to do that against teams like Man United they break so fast," he said.

"We go 2-1 behind and we've always had enthusiasm and confidence but these games you go behind against a team that's been playing so well it really showed the mentality of the players and we deserved a point at least out of the game," added Rodgers. 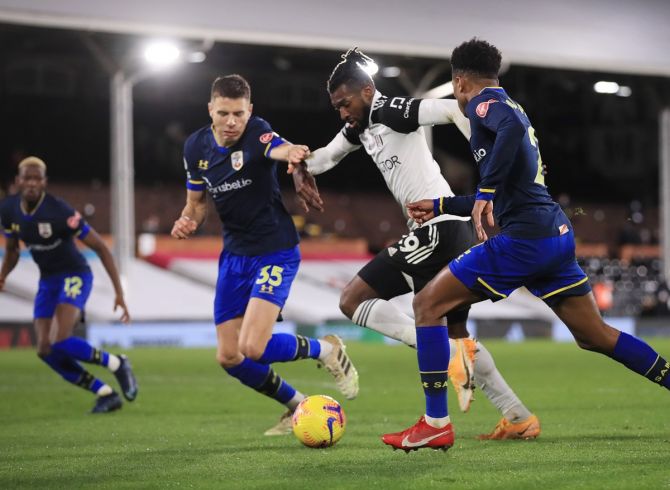 Southampton were left to rue the woodwork and close offside calls as they were held to a 0-0 draw against Fulham at Craven Cottage in the Premier League on Saturday.

Fulham threatened to break the deadlock through early counterattacks led by Andre-Frank Anguissa and Ademola Lookman while Southampton captain James Ward-Prowse's free kick in the 26th minute smashed the woodwork.

The visitors stepped up their intensity in the second half, with striker Shane Long's thunderous half-volley forcing an impressive save from Fulham goalkeeper Alphonse Areola.

Long, who led the Southampton attack in the absence of the injured Danny Ings, found the net with 15 minutes remaining but the goal was ruled out for offside. Aston Villa made light of playing half the match with 10 men to thrash Crystal Palace 3-0 in the Premier League on Saturday.

Bertrand Traore put an impressive Villa side ahead early on but the hosts had Tyrone Mings dismissed shortly before the break after picking up a second yellow card.

It made little difference as they outplayed Palace in the second half with Kortney Hause heading in from close range to double their lead in the 66th minute.

Anwar El Ghazi's rasping finish 10 minutes later wrapped up the points for Villa and they could have won by a bigger margin had Ollie Watkins not been denied by the post late on.

Villa climbed to sixth in the standings with 25 points from 13 games while Palace stay in 13th place.