Lampard, Chelsea's record scorer with 211 goals in his 13 years at Stamford Bridge and still looking out of place in City's light blue shirt after years in Chelsea's royal blue, came on as a late substitute and scored to give the champions a 1-1 draw against the league leaders but did not celebrate the goal that earned his side a point.

He left the pitch to a standing ovation from the Chelsea fans as well as applause from the City supporters. While the most dramatic events of the day unfolded at Leicester's King Power Stadium, the most poignant personal event took place at the Etihad Stadium, when Lampard, on a short-term loan at City from his MLS side New York City, replaced Aleksandar Kolarov with 12 minutes to play and City trailing Chelsea 1-0.

City were also down to 10 men following the 66th minute dismissal of Pablo Zabaleta for a foul on Diego Costa and they were also a goal down to Andre Schurrle's 71st minute far post tap-in following a swift break.

Enter Lampard. Not only is he Chelsea's all-time top scorer but he is also third on their all-time appearance list but when James Milner crossed, Lampard struck and his low volley flew past Thibaut Courtois for City's equaliser.

"It's a really difficult one. I'd be unprofessional if I came on and didn't do my job so I'm mixed with it," he told Sky Sports.

"The Chelsea fans were singing my name and it was an emotional day. It's not how I expected to say goodbye to the Chelsea fans. I woke up this morning and didn't know what I wanted from today so I'm glad it's out of the way. I guess this is a happy medium." Dejected Manchester United players look on as they head towards a 5-3 defeat during the Barclays Premier League match against Leicester City. Photograph: Clive Rose/Getty Images

Earlier United, who raced into a 2-0 lead at Leicester City and then led 3-1 with 33 minutes to play, ended up beaten 5-3 in a game that will live on as one of Leicester's most unlikely victories of modern times.

Manchester United led 2-0 and 3-1 at the King Power Stadium but finished with 10 men and no points after Leicester's astonishing fight back.

United were 2-0 up inside 16 minutes with a header from Robin van Persie and a brilliant chip from Angel di Maria. Leonardo Ulloa headed Leicester back into the game in the 17th minute before Ander Herrara back-heeled United 3-1 up after 57 minutes.

But Leicester then replied with four unanswered goals from a David Nugent penalty after 62 minutes, an equaliser from Esteban Cambiasso after 64 minutes, the fourth from Jamie Vardy after 79 minutes when he broke into space and the fifth from Ulloa with another penalty after 83 minutes which saw young United defender Tyler Blackett red carded.

"We had done our research this week and their attacking options are frightening but the diamond formation they play leaves a lot of space behind the full backs and we looked to exploit that," he said.

Manchester United had beaten Leicester in nine of their last 10 league meetings, and drawn the other, since Leicester last beat United in the league in January 1998.

‘We gave it away and I don't like that’ Stunned United manager Louis van Gaal told the BBC: "I cannot say that I am happy," Van Gaal said. "In the world of football, these matches happen. I was a coach at Barcelona in my first year and we were 3-0 ahead, with 15 minutes to play and we lost 3-4.

"It is not good because we have the game in our pocket and gave it away. Not because of Leicester, we gave it away and I don't like that."

Shocks did not stop there 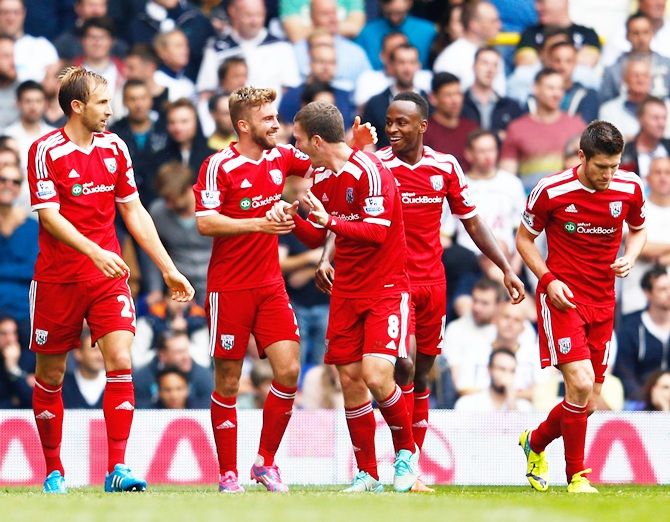 James Morrison, second left, of West Brom celebrates with teammates after scoring the opening goal during the Premier League match against Tottenham Hotspur

But the shocks did not stop there. In the other early match West Bromwich Albion climbed off the bottom of the table when they won their first match of the season, 1-0 at out-of-sorts Tottenham Hotspur who started the season well but have now lost their last two home matches.

The only goal at White Hart Lane was headed home by James Morrison after 74 minutes.

Everton, like Spurs, played in the Europa League on Thursday and like Spurs, lost at home. Romelu Lukaku gave Everton a ninth minute lead before goals from Mile Jedinak from the spot, Fraizer Campbell and Yannick Bolasie put Palace ahead.

Leighton Baines scored a late penalty for Everton who have now won only three of their last 10 games.

After the dust settled, Chelsea remained top with 13 points from their five matches, followed by Southampton and Aston Villa on 10 points.

City were sixth on eight points, level with Leicester who climbed from 13th to seventh, leaving United languishing in 12th spot.

West Brom and Palace, who started the day in the bottom two positions, climbed up to 15th and 16th behind Everton in 14th leaving Newcastle bottom on goal difference from Burnley.

© Copyright 2023 Reuters Limited. All rights reserved. Republication or redistribution of Reuters content, including by framing or similar means, is expressly prohibited without the prior written consent of Reuters. Reuters shall not be liable for any errors or delays in the content, or for any actions taken in reliance thereon.
Related News: Chelsea, Leicester, Manchester City, Frank Lampard, Manchester United
COMMENT
Print this article 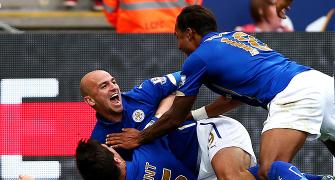 EPL player of the weekend: Costa takes honours as he equals record! 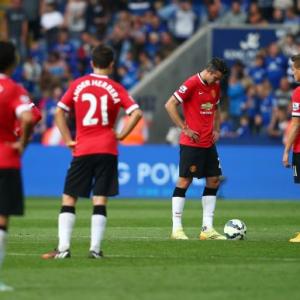