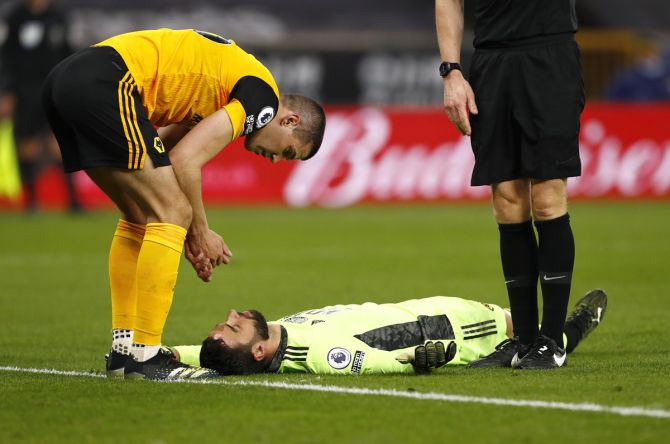 Liverpool stayed in the hunt for a top-four Premier League finish with a 1-0 win at Wolverhampton Wanderers, on Monday, but the match was marred by a serious-looking head injury to the home team's goalkeeper Rui Patricio.

Play was held up for 10 minutes after Patricio collided with team mate Conor Coady in the 89th minute as they tried to close down Liverpool forward Mohamed Salah, who netted but the goal was disallowed for marginal offside.

Patricio was treated and carried off on a stretcher and his Portuguese compatriot Jota, who scored the winner against his former club on the stroke of halftime, had mixed emotions after the final whistle.

"Against these kind of teams you have to take advantage when they are unbalanced and they were in that moment. It was good movement and a good goal."

"We need to improve a lot in this competition and hopefully this can be the start of a great run to the end of the season."

The result lifted Liverpool two places up to sixth on 46 points from 29 games, five adrift of fourth-placed Chelsea and two behind fifth-placed West Ham who have a game in hand. Wolves stayed 13th on 35 points from 29 matches. 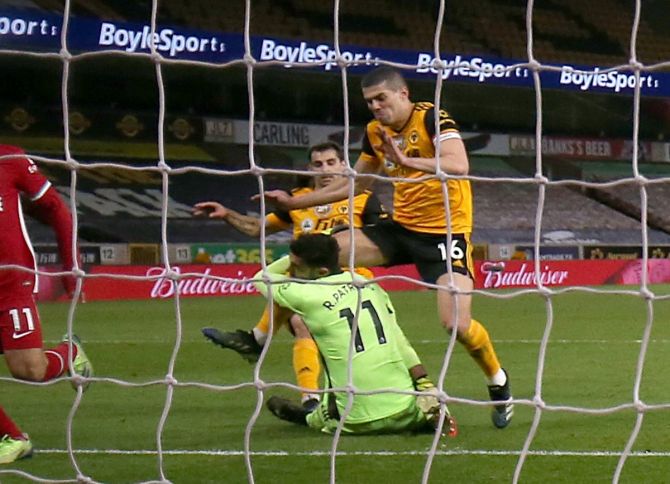 Nelson Semedo missed an early chance for the home side when Liverpool keeper Alisson Becker parried his close-range effort before Sadio Mane twice came close for the visitors, who looked toothless in the opening 30 minutes.

Jota struck in first-half stoppage time as he beat Patricio with a swerving low shot from inside the penalty area after a flowing move by Salah and Mane, who fed the scorer with a sublime pass.

Coady headed over the bar for Wolves from a good position in the 49th minute and Patricio tipped away a Salah shot from a tight angle at the other end before his horrific collision with Coady on the edge of the six-yard box.

Jota had no qualms about sinking his old club in Liverpool's bid to climb into the Champions League spots.

"I worked here for over three years. I know almost everyone in that dressing room. I just wish the fans could be here to make it even more special."

"If we play the way we have here I think we have a chance of the top four."