A summary of Saturday's action in the Premier League. A shambolic Manchester United side conceded four goals in the opening 35 minutes in a 4-0 drubbing at Brentford on Saturday as their woeful start to the Premier League season continued.

United's seventh successive away league defeat was assured long before the interval as Brentford took ruthless advantage of a catalogue of errors by the visitors.

The rout began in the 10th minute when United keeper David de Gea allowed a weak shot by Josh Dasilva to slip past him.

Things got worse for United eight minutes later when De Gea played the ball out to former Brentford player Christian Eriksen, who was caught in possession and Mathias Jensen slotted home.

When United's defence failed to deal with a corner and Ben Mee glanced in a close-range header to make it 3-0 the Brentford fans were ecstatic while United's new manager Erik ten Hag looked ashen-faced in his technical area.

Brentford's fourth was a gem as Ivan Toney delivered a diagonal ball to Bryan Mbeumo from a counter-attack and Mbeumo calmly beat De Gea.

Ten Hag made three substitutions at half-time, with Raphael Varane, Tyrell Malacia and Scott McTominay coming on but despite a slight improvement United offered little fight. 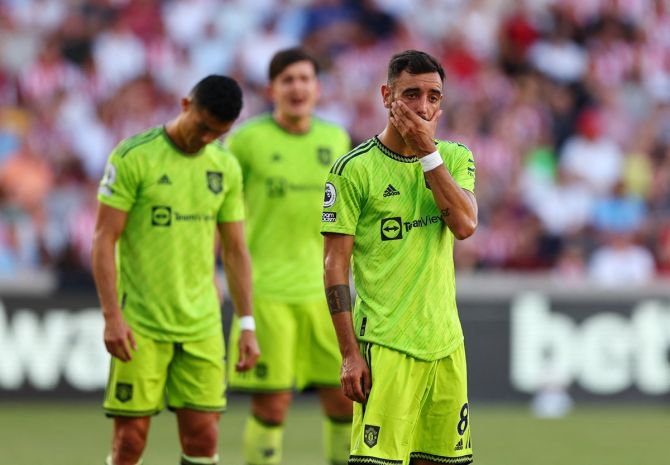 Brentford's fans serenaded their players with "Hey Jude" at the final whistle while United's players looked crestfallen as they trudged off rock bottom of the table having also lost their opener at home to Brighton & Hove Albion.

It was the first time since 1960 that United have conceded at least six goals in their first two matches of a top-flight season and the first time they have lost their opening two matches since 1992 when they went on to win the title.

This side, however, looks woefully inadequate to mount any kind of challenge and Ten Hag, who was taunted by the Brentford fans, appears to have a huge job on his hands.

The Dutchman is the first Manchester United manager to lose his first two games in charge since John Chapman in 1921.

"It's easy to dismantle this United side, just be organised and fight and you're there," said former United player and Sky Sports pundit Gary Neville said. For Brentford, whose starting line-up cost in the region of 55 million compared to the more than 400 million of United's, have picked up four points in their first two games.

"It was just hard work. We knew the high press would affect them. It was clear to see that if you work hard, you get the result," Toney told Sky Sports.

"We know they have great talent in there and have some players who can change the game. When you work like we did today and run all over them, you get a result like we did."

United had Cristiano Ronaldo back in their starting line-up but the Portuguese forward barely got a look in.

The confidence drained out of United from the moment De Gea allowed Dasilva's shot to end up in the back of the net.

Eriksen, who got a mixed reception from Brentford's fans, then inadvertently gifted his former club their second as United looked shellshocked by the energy of their hosts who went on to record their biggest top-flight victory since 1938.

Things will not get any easier for United whose next game is against Liverpool.

"It was a horrible day," De Gea said. "I should have saved the first shot and then the result may have been different.

"Other teams concede one goal and win 5-1. We have to react much better. It was a poor performance." Manchester City made it two wins from two at the start of the new Premier League season after thrashing newly-promoted Bournemouth 4-0 at the Etihad Stadium earlier on Saturday.

The champions wasted no time getting into their stride in the sunshine as Norway striker Erling Haaland marked his home debut with an assist for Ilkay Gundogan's opener after 19 minutes.

With the first goal on the board, City cut loose and scored a sumptuous second 12 minutes later when Kevin De Bruyne curled a fine strike into the net with the outside of his foot.

Phil Foden added another before halftime from De Bruyne's assist and it was just a matter of how many more the hosts would help themselves to.

Haaland's moment in front of goal came late in the second half but he failed to connect properly with Jack Grealish's pull back.

It mattered little as a late own goal from Jefferson Lerma put the icing on the cake, with City maintaining their 100% start to the new campaign at a canter.

In City's first home match since their dramatic final-day victory over Aston Villa that clinched a fourth league title in five seasons in May, all eyes were on Haaland following his double on debut last weekend at West Ham United.

The prolific former Borussia Dortmund hitman should have been presented with a golden chance early on to break the deadlock, but Foden elected to shoot rather than pass to his new team mate in open space next to him, with Bournemouth goalkeeper Mark Travers denying the England international.

However, with his first touch of the game, Haaland turned provider for Gundogan, scorer of two crucial goals in that final-day success over Villa, who finished well into the far corner.

De Bruyne's first goal of the season was a thing of beauty, before normal service was resumed as the Belgian midfielder added another Premier League assist to his vast collection, playing Foden through for a third inside 37 minutes.

City took their foot off the gas after the break but still had plenty of chances to add a fourth -- Haaland missing the best of them -- before Lerma diverted Joao Cancelo's cross into the net for the final goal.

Jesus opens Arsenal account with double in win over Leicester Gabriel Jesus opened his Arsenal account with two goals as the London side maintained their strong start to the Premier League season with a 4-2 victory over Leicester City.

In sizzling sunshine in north London, Brazilian forward Jesus produced a dazzling display, scoring twice before the break and going close to a hat-trick on several occasions.

On his home debut following his move from Manchester City he chipped Arsenal in front in the 23rd minute and made it 2-0 with a poacher's close-range header in the 35th.

Leicester got a lifeline when William Saliba, also making his home debut, headed into his own net eight minutes after the break but almost immediately a mistake by Leicester keeper Danny Ward allowed Granit Xhaka to restore Arsenal's two-goal lead.

James Maddison again gave Leicester hope when his shot went through the legs of Arsenal keeper Aaron Ramsdale but the hosts responded quickly with Gabriel Martinelli finding the bottom corner from an assist by Jesus.

It was a vibrant performance by Mikel Arteta's Arsenal side who have six points from their opening two games. Southampton duo Kyle Walker-Peters and Joe Aribo cancelled out a double from Leeds United's Rodrigo as the home side roared back from two goals down to salvage a 2-2 draw.

Leeds looked set for the three points before Walker-Peters and Aribo turned the game on its head with two fine strikes to ease the pressure on manager Ralph Hasenhuettl following Saints' heavy loss at Tottenham Hotspur on the opening weekend.

Leeds dominated the ball in the early exchanges but it was Southampton who looked the more threatening, with Stuart Armstrong and debutant Armel Bella-Kotchap coming close.

The visitors were dealt a blow in the 28th minute when striker Patrick Bamford, who missed a chunk of last season due to injury, made way for Daniel James and the Welshman almost had a dream introduction as he forced Gavin Bazunu into a fine save.

Leeds made Southampton pay for a sloppy start to the second half when Rodrigo turned in Jack Harrison's cross from the left in the 46th minute with a clever finish before adding another on the hour with a header from close range.

Aribo pulled one back in the 72nd minute when he finished off a slick team move before Walker-Peters completed the comeback with a low powerful shot past Illan Meslier. 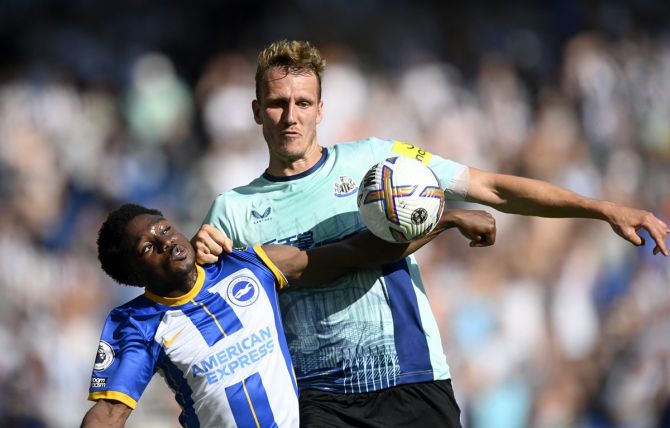 Brighton & Hove Albion were thwarted by two goal-line clearances as they were held to a 0-0 draw by Newcastle United in their Premier League clash at a sun-drenched Amex Stadium.

With temperatures soaring to more than 30 degrees Celsius on England's south coast, the game got off to a flying start as Brighton pinned back the visitors for the first 10 minutes before Newcastle started to hit back with lightning-quick counter attacks.

Solli March looked to have given Brighton the lead in the 33rd minute but fullback Kieran Trippier was on hand to clear the ball off the line, with replays showing that most of the ball was over the line.

Goalkeeper Nick Pope made a brilliant save early in the second half, clawing away Adam Lallana's header after Brighton's attacking midfielder was left unmarked in the box.

Tempers boiled over in the 57th minute though, as Joelinton and Solli March got involved in a shoving match down by the corner flag, with both players getting shown the yellow card.

The water break shortly afterwards - introduced this weekend due to scorching temperatures - was well-earned following a goalmouth scramble that saw Brighton go close, only for Newcastle to zip up the other end on the counter in a move stopped by a last-ditch tackle on Miguel Almiron.

Newcastle continued to threaten on the break and from set pieces, but it was Brighton who went closest to breaking the deadlock, forcing a number of saves from Pope and a goal-line clearance from Fabian Schaer as the game finished scoreless.

After winning their opening league fixtures last weekend, the draw leaves both sides on four points. Aston Villa striker Danny Ings and substitute Emiliano Buendia secured a 2-1 win over Everton as the hosts claimed their first three points of the new Premier League season in a physical encounter at a sweltering Villa Park on Saturday.

Having lost 2-0 at Bournemouth on the opening weekend, Villa's manager Steven Gerrard restored centre back Tyrone Mings to the starting lineup and his side bounced back with an industrious performance, outmuscling an Everton team coached by Gerrard's former England team mate Frank Lampard.

The two players appeared 59 times together in their careers that saw them lauded for their attacking flair, but there was very little creativity on show until Ings opened the scoring for the home side with the only shot on target in the first half.

After good work down the right by Ollie Watkins, the 30-year-old swiped the ball from in front of onrushing team mate Philippe Coutinho before cutting back onto his left foot and rifling a shot past Jordan Pickford just past the half-hour.

Everton, who lost 1-0 at home to Chelsea last weekend, upped the tempo in the second half, but struggled to create many clear-cut chances.

After winning the ball in the centre of the field, Villa worked it out to Watkins and his centre was tapped into an empty net by Buendia in the 85th minute, but an own goal by former Everton player Lucas Digne after good work from the visitors' new signing Amadou Onana made for some nervous final minutes.

With Everton throwing everything forward, defender Mings made a superb late challenge to deny substitute Salomon Rondon as the home side held on to win.

"There were always going to be edgy moments in the game, Everton are a physical side and they caused us problems," Ings told BT Sport. "That's how you stick it out, that's how you grind it out and win ugly at times."