Liverpool's new American era began in failure on Sunday in front of their latest owners with a 2-0 loss to Merseyside rivals Everton that sent them second from bottom of the Premier League.

John W Henry and Tom Werner were at Goodison Park to see Tim Cahill and Mikel Arteta score in the 34th and 50th minutes, condemning the five-times European champions to their fourth defeat from eight games this season.

Fernando Torres went closest for the visitors when his first-half header was turned over the bar by Everton keeper Tim Howard but Liverpool offered little else.

They slipped one place in the table on goal difference, level on six points with Wolverhampton Wanderers and bottom-placed West Ham United.

Chelsea stayed top of the league after their 0-0 draw at Aston Villa on Saturday. Second-placed Arsenal closed the gap with a 2-1 win at home to Birmingham City, and Manchester United lost ground after a 2-2 draw with West Bromwich Albion at Old Trafford.

The jubilant scenes in London on Friday concluded one of the most dramatic weeks in the 118-year history of Liverpool, one of England's most famous and successful clubs.

Fans welcomed Henry and NESV after becoming increasingly outraged at Hicks and Gillett's stewardship and fearful the club was weighed down by unsustainable debt.

Yet the euphoria of the takeover battle did not carry over to the pitch.

Everton supporters taunted their counterparts with chants of "Going down" after the defeat that left Liverpool 19th in the table, their lowest position in the history in the premier league.

Manager Roy Hodgson was given a vote of confidence by Henry before Sunday's match, but the defeat is certain to focus further attention on the Englishman's future. 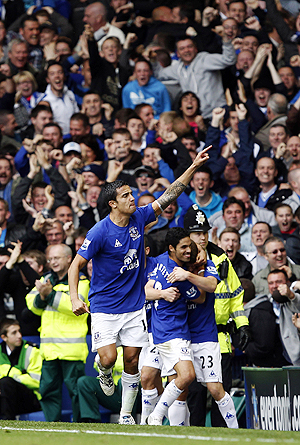 "I don't feel it to be a crisis. The way we played today -- I don't think anyone would believe that's the level of football a team in the bottom three or four would play," Hodgson told Sky Sports.

"On the other hand, there's six points from eight games and that's a very, very poor return. We do need to start winning and climbing up that table soon, and until we do so I daresay the word 'crisis' will be bandied around.

"The new owners making it clear I'm the right man to do the job. You're always happy to hear that but whether that's changed after today, I don't know."

The home side pressed from the kickoff and went close twice in almost identical fashion in the first quarter of an hour. Defender Phil Jagielka fired a left-foot shot over the bar after 12 minutes and two minutes later his defensive partner Sylvain Distin missed the target from a similar position inside the area.

The breakthrough came from a determined run down the right by Everton's right-back, Seamus Coleman.

The Irishman surged into the area, committing defenders, and after his cross took a slight deflection off Paul Konchesky, the ball sat up for an onrushing Cahill, and the Australian drilled his finish high into Jose Reina's net.

Within five minutes of the start of the second half, Everton doubled their lead.

Liverpool failed to deal adequately with a corner, Sotiros Kyrgiakos's clearance falling to an unmarked Arteta, whose right-foot shot from the edge of the area swerved viciously and left Reina clutching at air.

Liverpool raised themselves late on, but it was more in hope than expectation.

Steven Gerrard delivered an inviting cross for Torres at the back post, but it was nicked away by a defender at the last momnent, and four minutes later Howard was alert to deny Torres's right-foot shot inside the area.

© Copyright 2021 Reuters Limited. All rights reserved. Republication or redistribution of Reuters content, including by framing or similar means, is expressly prohibited without the prior written consent of Reuters. Reuters shall not be liable for any errors or delays in the content, or for any actions taken in reliance thereon.
Related News: Howard, Everton, HODGSON UNDER PRESSURE Henry, John W Henry, New England Sports Ventures
COMMENT
Print this article