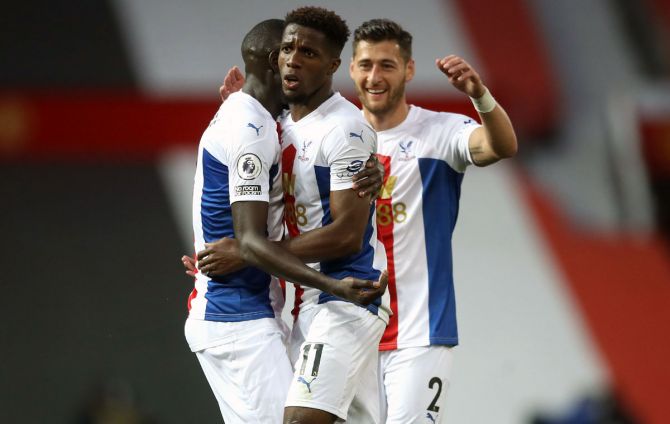 Manchester United’s season got underway with a shock 3-1 defeat by Crystal Palace as Wilfried Zaha grabbed a late double for the visitors in the Premier League on Saturday although VAR was once again the centre of attention.

United looked off the pace early on as Andros Townsend put Palace in front after seven minutes, with the home side’s campaign starting a week later than initially scheduled due to last season’s Europa League commitments running into mid-August.

Paul Pogba and Scott McTominay went close as United chased an equaliser but the hosts could have gone in two goals behind at half-time, with only a brilliant David De Gea save keeping a goal-bound Jordan Ayew strike out. 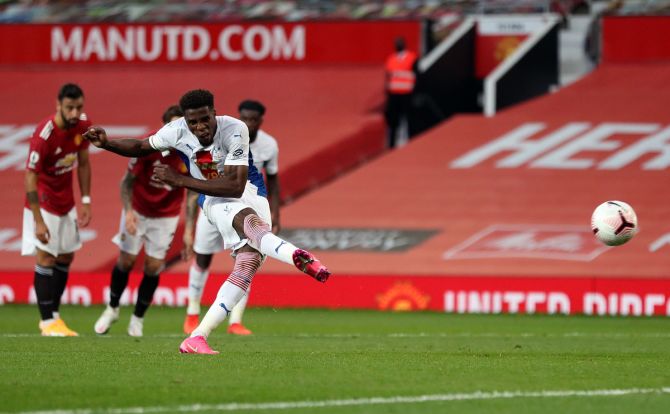 United brought Mason Greenwood on at half-time but their task was made more difficult when the VAR decided that referee Martin Atkinson should consult the pitch-side monitor and he awarded Palace a penalty for handball against Victor Lindelof.

Ayew stepped up to take the spot kick but De Gea made a fantastic save.

The VAR drama was not done there, however, with Atkinson informed that De Gea had come off his line and the penalty was retaken, Zaha converting this time.

New signing Donny van de Beek came off the bench to get the home side back in the contest with a goal on his debut, but former United forward Zaha had the last laugh as he made sure of a deserved win for Palace with a fine finish late on. 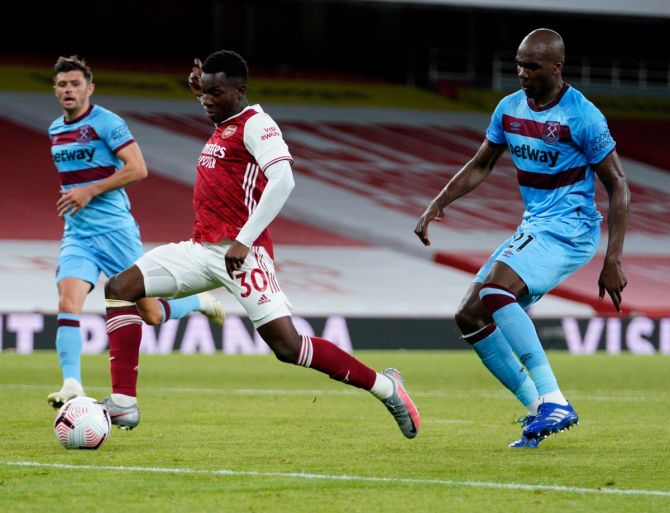 A late goal from substitute Eddie Nketiah gave Arsenal a 2-1 home win over West Ham United in the Premier League on Saturday after Michail Antonio's first-half strike for the visitors had cancelled out Alexandre Lacazette's 50th goal for the Gunners.

West Ham were more organised playing with a five-man defence than in their opening 2-0 home loss to Newcastle United as they faced an Arsenal side fresh from a 3-0 win at promoted Fulham.

But the hosts broke through in the 25th minute when captain Pierre-Emerick Aubameyang, fresh from signing a new three-year deal, sprang onto a through ball down the left and chipped across to Lacazette, who headed past keeper Lukasz Fabianski.

The visitors had a decent claim for a penalty shortly before halftime when Arsenal's new signing Gabriel Magalhaes appeared to handle but the video assistant referee judged otherwise.

West Ham levelled just before halftime with a brilliantly worked move from deep in their own half. Tomas Soucek ran the ball through the middle and sent a pass wide to Ryan Fredericks who whipped it into the path of Antonio to net from close range.

The Hammers forward has scored nine times since play resumed in June after a three-month break due to the new coronavirus, more than any Premier League player apart from Raheem Sterling.

Antonio nearly doubled his tally with another tap-in shortly after the restart, but Arsenal keeper Bernd Leno got down at his feet to smother the ball right on the goal-line.

Instead, Nketiah claimed all three points for the hosts when he latched onto a Dani Ceballos layoff in the 85th, having come on less than 10 minutes before to replace Lacazette.

"It's nice to get on and help the team win," Nketiah told Sky Sports. "It's a great feeling to come on and score."

The victory means Arsenal have won 11 of their past 12 home games against the Hammers in all competitions.

Leeds hang on for points in seven-goal thriller with Fulham 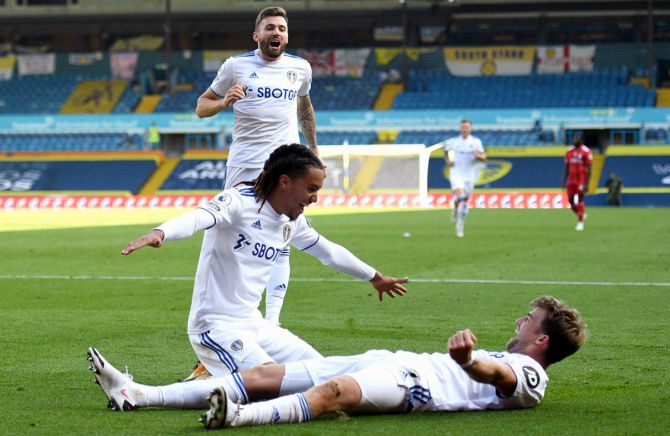 Newly-promoted Leeds United continued their barnstorming return to the Premier League as they claimed their first points with a thrilling 4-3 win over Fulham at Elland Road on Saturday.

After being on the wrong end of a 4-3 scoreline at champions Liverpool on the opening day, Leeds, back in the top flight after a 16-year absence, produced more vibrant attacking football along with defensive jitters.

Two goals from Helda Costa and one apiece for Mateusz Klich and Patrick Bamford should have made for a more comfortable afternoon for Leeds boss Marcelo Bielsa.

But Aleksandar Mitrovic’s brace kept Fulham, promoted along with Leeds last season, in the hunt in an absorbing clash played out at a punishing tempo throughout.

For Leeds, the relief was palpable as the final whistle heralded their first top-flight win since April 2004.

“It was a little too close in the end,” Bamford, who also scored at Liverpool, told BT Sport. “I think there will be a few long meetings this week to see what we can do better.

“The third goal made us panic a bit.” 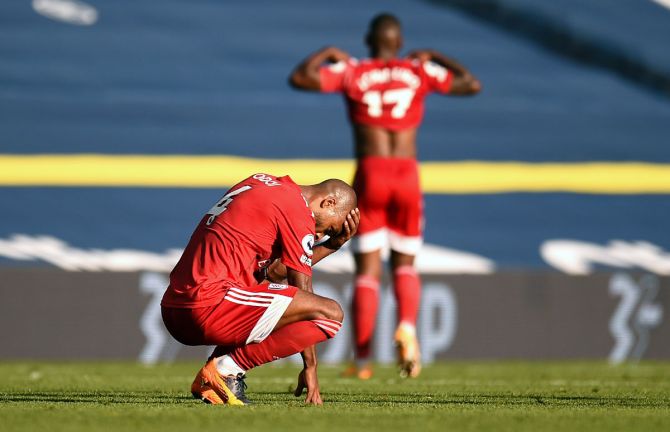 While defensive coaches may pick holes in the Leeds approach, there will be few complaints among the Yorkshire club’s fans, or neutrals, if they keep serving up this kind of entertainment.

They needed only five minutes to go ahead as Costa, unmarked at the back post, took a touch and smashed home.

Leeds played the ball around in fluid fashion but a rash tackle by new German signing Robin Koch saw Joe Bryan go down in the penalty area and Mitrovic converted from the penalty spot for his 50th goal in 100 league appearances for Fulham.

The visitors were only level for seven minutes though as Bryan pushed Bamford in the area, allowing Klich to calmly roll in the penalty and give Leeds an interval lead.

Bielsa’s side began the second half in stunning fashion and Klich’s sliderule pass cut open Fulham’s defence, allowing Bamford to place his shot inside the far post.

Substitute Bobby Decordova-Reid fired into the bottom corner and when Mitrovic headed in Kenny Tete’s cross there were still more than 20 minutes left on the clock.

Mitrovic went close to an equaliser and Neeskens Kebano hit the post for Fulham as Leeds wobbled but the hosts could also have added to their tally in a tense finale.

Like Leeds, Fulham’s style was easy on the eye but Parker’s side now have no points from two games, having conceded seven. 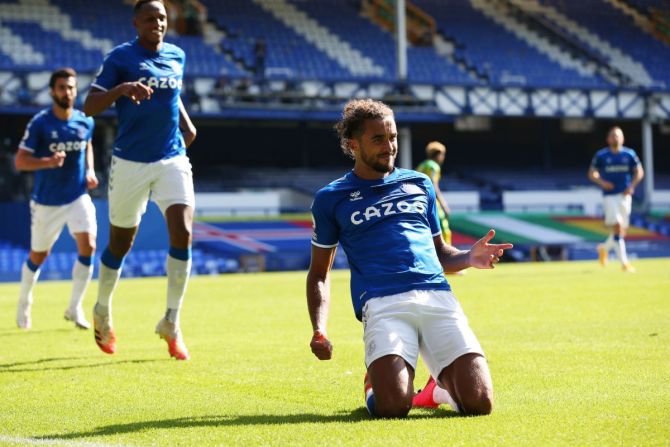 West Brom started brightly and opened the scoring through Grady Diangana, but when Calvert-Lewin equalised following an intervention from the Video Assistant Referee, Everton took control.

Rodriguez whipped Everton in front from the edge of the box, and Michael Keane and Calvert-Lewin ensured it was two wins from two in the Premier League so far this season.

It all started well for the visitors when Diangana fired past home goalkeeper Jordan Pickford after running 60 metres for his first top-flight goal, and they might have been 2-0 up when Jake Livermore struck a post.

Everton found an equaliser through Calvert-Lewin's clever close-range back heel that was initially disallowed for offside, a decision over-ruled by VAR as the touch into the striker's path came via a slight deflection off West Brom defender Darnell Furlong.

The home side were in front just before halftime as Richarlison wriggled past a couple of challenges before feeding Rodriguez, who speared a low drive into the bottom corner from the edge of the box.

Gibbs was sent-off shortly afterwards and could have no complaints as he pushed Rodriguez in the face, while Baggies boss Bilic was similarly punished by referee Mike Dean for his vehement complaints at halftime.

West Brom equalised minutes into the second period with a free-kick of real quality from Matheus Pereira, but Michael Keane restored Everton’s lead with a tap-in after the ball fell loose in the box following Lucas Digne’s free-kick.

Rodriguez's delightful pass then put Richarlison behind the West Brom defence and his cross was bundled over the line by Calvert-Lewin.

The striker completed his hat-trick with a header from Digne’s corner as Everton threatened to run riot.

The home side appeared sloppy at times compared with their 1-0 win at Tottenham Hotspur in their season opener, but they have continued to improve dramatically from last season.

For West Brom, however, eight goals conceded in two games shows the measure of their task since winning promotion to the Premier League.