Manchester United trailed three times before a last-gasp goal from Javier Hernandez earned a rip-roaring 4-3 win over Newcastle United that opened a seven-point lead at the top of the English Premier League on Wednesday.

Elsewhere, Manchester City were undone by former winger Adam Johnson in the 53rd minute as he scored the only goal in a 1-0 victory for Sunderland.

Champions Manchester City are second in the table, four points ahead of Chelsea who won 1-0 at Norwich City thanks to a 20-metre strike from Juan Mata.

As they have done so many times this season, Manchester United fell behind when James Perch scored after four minutes at Old Trafford. 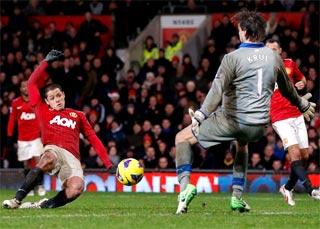 Jonny Evans levelled in the 25th minute before the defender put through his own net four minutes later as the visitors went back in front.

Patrice Evra equalised for the home team but Papiss Cisse then gave Newcastle a 3-2 lead. Robin van Persie hit back for Manchester United before Mexico striker Hernandez popped up with the winner in the last minute.

Manchester United's 19 league matches this season have yielded a total of 76 goals and their mantra appears to be 'however many you score, we will score more'.

Had they not steamed back to win in a thrilling Boxing Day fixture, controversy would have raged at Evans's own goal.

Referee Mike Dean initially disallowed it, ruling that Newcastle striker Cisse was offside, but he changed his mind after a lengthy delay during which he consulted his assistant.

"I thought it was a bad decision for the own goal," said Manchester United manager Alex Ferguson who vented his fury at Dean at halftime.

"Cisse was offside and he also grabbed Evans on the arm. If that's not interference, what is interference?", Ferguson told the BBC.

"December is always a big month. We dropped two points at Swansea (on Sunday) but made up for it today. It was a real championship performance."

Manchester United had to do without striker Wayne Rooney after he was hurt in training.

"Rooney has injured a ligament at the back of his knee and will be out for two or three weeks," Ferguson said. "We are running out of ammunition."

Before his part in the controversy Evans had equalised for Manchester United but the defensive frailties that have plagued them this season meant they needed to play catch-up twice more.

Newcastle's third goal by Cisse raised hopes of their first league win at Old Trafford since 1972.

Van Persie equalised for the home team with his 13th league goal of the season before Hernandez produced his grandstand finish to give United their eighth victory this season in a game where they previously trailed.

Manchester City's defeat at Sunderland was their second in a row at the Stadium of Light.

"It's the same story for us at Sunderland every year, we are not going to come here next season," said manager Roberto Mancini with his tongue firmly in his cheek.

"It's important that our strikers start scoring more goals, sometimes we take one touch too many."

With the season at the halfway point Manchester United, who have already racked up 48 goals to compensate for some unusually leaky defending, have 46 points with Manchester City on 39. Third-placed Chelsea, who have a game in hand, are on 35.

In the race for fourth place, Everton nudged ahead with a 2-1 win over struggling Wigan Athletic at Goodison Park where home defender Phil Neville made his 500th league appearance.

West Bromwich Albion continued to impress with a 2-1 victory at Queens Park Rangers in a match delayed after the bus carrying the visiting team arrived late.

Harry Redknapp's QPR dropped back to the bottom of the table with only 10 points, Reading jumping above them on goal difference with a 0-0 draw at home to Swansea City.

Fulham drew 1-1 with Southampton who remain just above the bottom three.

Chelsea followed up their 8-0 thrashing of Villa on Sunday by winning at Norwich.

"(Norwich) have won against Manchester United and Arsenal this season. It was tough but I was really pleased with the performance of the players," said Chelsea manager Rafa Benitez.

"The team are showing character. I am really pleased with the workrate and the style of play."