Ryan Giggs demonstrated his enduring value to Manchester United with the opening goal in a 2-0 home win over Everton on Sunday that put his side almost out of sight in the title race.

The 39-year-old Welshman slotted his side in front after 13 minutes to continue his extraordinary feat of having scored in every Premier League season since its inception 21 years ago.

Robin van Persie was also on target for United before halftime as the leaders took full advantage of champions Manchester City's shock 3-1 defeat at Southampton on Saturday.

With 12 games remaining Alex Ferguson's side have 65 points, 12 more than City, and are closing in on a 20th league title.

At the other end of the table, Aston Villa claimed a vital 2-1 home victory over West Ham United to move out of the bottom three, Christian Benteke and Charles N'Zogbia the scorers. 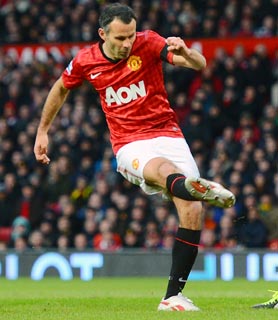 A remarkable 4-4 draw with Everton in the final weeks of the title race last season proved United's undoing as City pipped them on the final day of the season on goal difference.

This time, however, there were no slip-ups from Ferguson's side as they recorded a 10th consecutive home league win.

Despite the proximity of Wednesday's Champions League last- 16 tie against Real Madrid, Ferguson resisted any temptation to rest key players - a mark of respect for an Everton side themselves chasing a top-four finish and who beat United on the opening day of the season on Merseyside.

With Madrid manager Jose Mourinho watching from the stands, United produced a clinical performance, even if Van Persie was guilty of an astonishing miss early on when he took the ball past Everton keeper Tim Howard but blasted his shot against the post.

But United did not have to wait long for their opener.

Van Persie picked out Giggs with a pull back and he steadied himself before curling a precise shot in off the post.

Everton briefly enjoyed some possession but on the stroke of halftime right back Rafael released Van Persie with a clever reverse pass and the Dutchman again rounded Howard before shooting into the empty net despite Johnny Heitinga's desperate attempt to keep the ball out of the net.

United never lost control and comfortably contained Everton after the break, although David De Gea was required to make a fine low save after sloppy play by Chris Smalling allowed Nikica Jelavic a rare sight of goal.