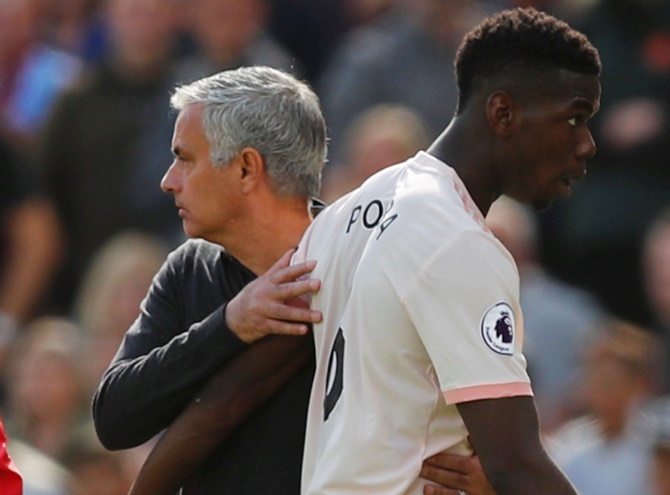 Manchester United's troubled season hit a new low on Saturday as Jose Mourinho saw his gamble on introducing a new tactical system backfire with an insipid 3-1 defeat to West Ham United in the Premier League.

After a week in which he had dropped Paul Pogba as vice-captain and seen his men ousted from the League Cup, Mourinho watched United's faint title hopes dwindle further at the London Stadium with a new-look set-up but the same old prosaic fare.

Pogba was so ineffectual that he was substituted after 70 minutes but long before that Mourinho's unfamiliar 3-5-2 line-up had been found wanting as record signing Felipe Anderson scored his first Hammers' goal with an audacious back-foot flick after just five minutes.

Andriy Yarmolenko's shot deflected off Victor Lindelof for an unlucky own goal just before the break but though substitute Marcus Rashford gave the visitors hope with a clever volleyed 71st-minute flick, Marko Arnautovic waltzed between United's central defenders minutes later to seal victory.

Man United's 10 points equals the club's worst return after the first seven matches of any season in the Premier League era, heaping more pressure on Mourinho, whose brand of football seems to be delivering neither points nor pleasure to United's fans.

United also had 10 points at this stage of the 2013-14 season but had a superior goal difference, so this year represents their poorest start in the top flight since 1989-1990.

Mourinho, whose uncomfortable-looking system featured a midfielder, Scott McTominay, playing on the right of a three-man defence, said he had no problems with the players' attitude but did question their quality and "mental fragility".

Suggesting that Pablo Zabaleta was offside when he delivered the cross for Anderson's opening goal, Mourinho told BT Sport: "I have no complaints with the players' attitude; I can have some complaints with some quality, with some mental approach in certain duels."

He praised McTominay as "brave" and "the best" of his players with his quality on the ball but the 21-year-old never looked completely at home in his new role.

Mourinho left Alexis Sanchez out of the squad and gave Anthony Martial a start.

He explained: "People have been asking for 'Martial, Martial, Martial', people are saying Alexis Sanchez is not playing well enough, so this week I was trying to agree and to say 'let's give a chance to Martial and let's leave Alexis out'."

The switch proved in vain with both Martial and Romelu Lukaku, who headed against the post in the first half, proving largely ineffective. 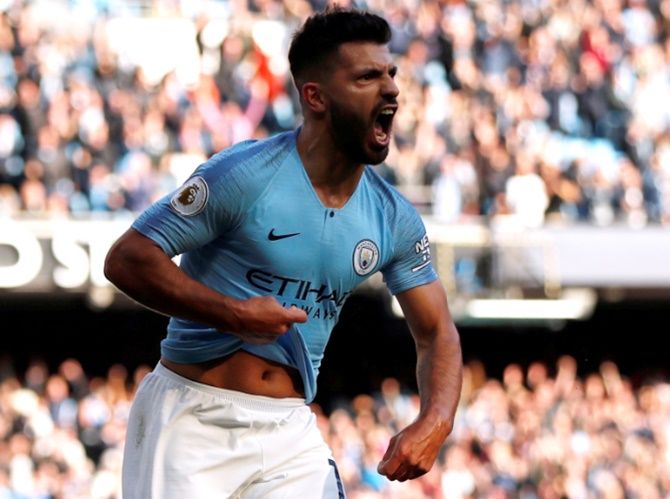 A stunning Sergio Aguero goal capped Manchester City's 2-0 win over Brighton & Hove Albion as Pep Guardiola's champions served further notice that they will again be the side to beat in the Premier League this season.

Although City had lost their previous home game to Lyon in the Champions League, there was never much chance of a repeat against a Brighton side who have never beaten them away.

City have now dropped just four points from a possible 39 from their last 13 matches in the league.

Raheem Sterling opened the scoring with a simple tap-in for his fourth goal of the season after excellent work from Leroy Sane on the left.

Sterling was also involved in City's second, exchanging a superb one-two with Aguero after the Argentine had burst forward from the halfway line, beating three players on his way.

Aguero kept his cool to slot home for the win that returned City to the top of the table ahead of the late kickoff between Chelsea and Liverpool.

He was then taken off by Guardiola, who clearly had his eyes set on Tuesday's Champions League match at Hoffenheim, which has taken on a critical importance for the Spaniard following the Lyon defeat.

"I'm a lucky guy to have this group. They are special people," Guardiola said, choosing to praise the patience and resilience of his team rather than its expansive quality.

"I was very pleased. We moved the ball quick, we didn't allow them to run at us, everybody was in the right position to move the ball quicker and our transitions are getting better, much better for instance than last season.

"The patience was important. You have to mature your game. Teams don't just defend, they defend well against us and it's not easy."

With City regaining top spot, however briefly, Guardiola added: "The important thing for us is to be solid in our game. At the top, Arsenal is coming back, Tottenham won again, Chelsea and Liverpool... the important thing is that we're focussed on what we have to do." 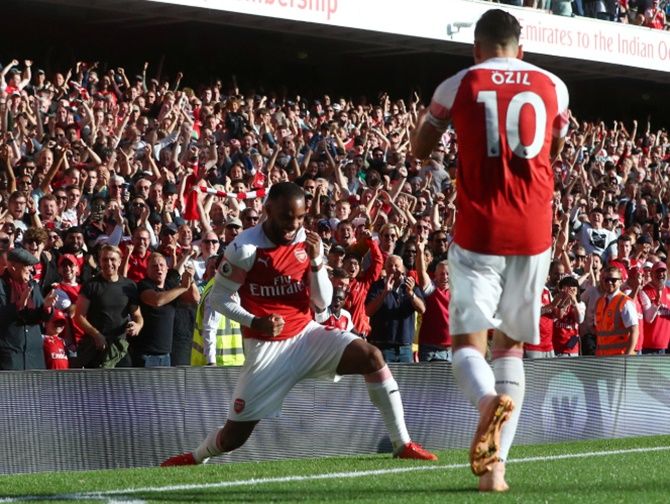 A late own-goal from Watford's Craig Cathcart and a Mesut Ozil strike two minutes later gave Arsenal a 2-0 win at the Emirates that sent them above the Hornets in the Premier League table.

Watford had created numerous chances throughout the match before defender Cathcart inadvertently flicked the ball into his own net in the 81st minute while trying to prevent Arsenal striker Alexandre Lacazette from collecting and shooting right in front of the goalpost.

Two minutes later, the Frenchman sent a low pass across the face of goal to the far post, where German midfielder Mesut Ozil sidefooted in an easy goal to double the lead to 2-0, a score that flattered the home side after an even, open and attacking match.

Watford had beaten Arsenal twice in their previous three Premier League meetings but were unable to extend that run. The loss sees them drop to sixth in the league table, swapping places with the Gunners who climbed one spot to fifth. 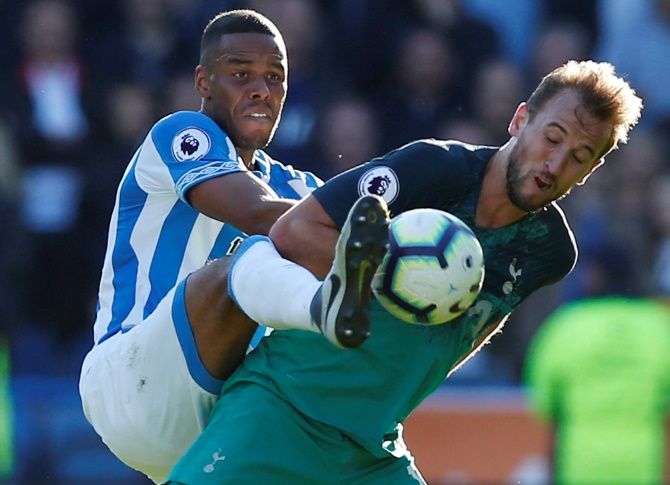 Harry Kane scored twice as Tottenham Hotspur moved into fourth place in the Premier League with a 2-0 win at bottom club Huddersfield Town.

Kane opened the scoring in the 25th minute, rising well to angle home a header from the familiar source of a pinpoint Kieran Trippier corner.

Nine minutes later the England international doubled the lead, this time from the penalty spot after Danny Rose went down under a challenge from Florent Hadergjonaj.

Huddersfield striker Laurent Depoitre rattled the woodwork with a volley just before the break and Terriers' substitute Isaac Mbenza brought a fine save out of Paulo Gazzaniga but Spurs saw out the game with relative ease.

© Copyright 2022 Reuters Limited. All rights reserved. Republication or redistribution of Reuters content, including by framing or similar means, is expressly prohibited without the prior written consent of Reuters. Reuters shall not be liable for any errors or delays in the content, or for any actions taken in reliance thereon.
Related News: Jose Mourinho, Manchester United, Alexis Sanchez, Paul Pogba, West Ham United
COMMENT
Print this article 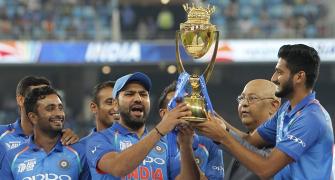 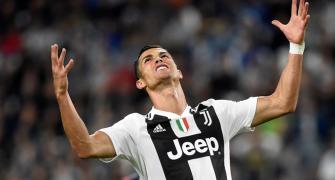 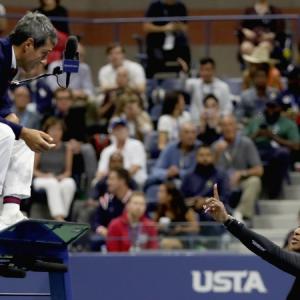 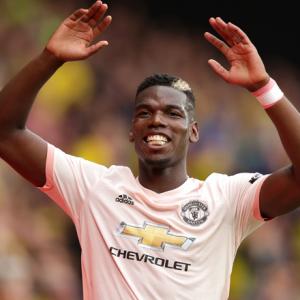 'No player is bigger than the club': Mourinho warns Pogba