It was manager Jose Mourinho's first league defeat at Stamford Bridge in 78 matches, with the winner coming from a cooly converted penalty by former Chelsea player Fabio Borini, who is on loan at Sunderland from the Merseyside club. 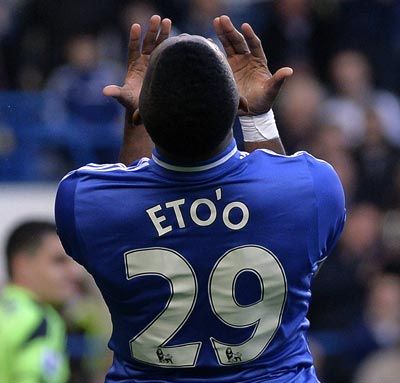 The defeat left Chelsea in second spot on 75 points from 35 games with three matches left, two points behind Liverpool who have played 34 before their visit to Carrow Road.

Third-placed Manchester City have 71 points from 33 games before they host struggling West Browmich Albion on Monday.

Sunderland, who drew at Manchester City in midweek, stay bottom with 29 points, one behind Fulham and Cardiff City with a game in hand, and three off Norwich who are just above the relegation zone in 17th.

"Congratulations to my players, because they gave what they have and what they don't have," Mourinho, whose unbeaten home record stretched over his two spells at Chelsea, told Sky Sports in a post-match interview that he cut short.

"Congratulations to Sunderland, because they won.

The Portuguese coach must now pick his side up for Tuesday's Champions League semi-final first leg at La Liga leaders Atletico Madrid followed by a Premier League clash with Liverpool and the return with Atletico the following week.

For Sunderland the win comes days after their surprise 2-2 draw with City and gives them hope of avoiding relegation.

Manager Gus Poyet, also a former Chelsea player, acknowledged that the penalty was a tough decision to give.

"I think the key games are against Cardiff and West Brom at home. Of course, we go to Manchester United and anything can happen. But it's exactly the same, nothing changes. We still believe. We try our best and there's nothing more we can do."

Early in the game there was little sign of the upset to come, with Chelsea camped in Sunderland's half and it was no surprise when Eto'o opened the scoring after 12 minutes, getting his boot to the ball ahead of the defence from Willian's corner.

Despite their lowly position Sunderland are showing some fight and, having gone behind at City before coming back, they showed the same spirit in equalising after 18 minutes.

The home side continued to press, forcing some fine saves from Sunderland keeper Vito Mannone, and thought they should have had a penalty when Seb Larsson knocked over Ramires.

Moments later Chelsea's Brazil midfielder appeared to elbow the Swede in the face, an incident missed by referee Dean.

Eto'o nearly added a second soon after the restart but shot wide and, despite having plenty of the ball going forward, Chelsea struggled to fashion any clear openings.

They were made to pay for a lack of cutting edge 10 minutes from time when left back Azpilicueta brought down United States international Altidore, allowing Borini to give the visitors an advantage they held through five minutes of added time.

Sunderland's win put further pressure on Cardiff City and Fulham, whose draw at Stoke City and loss to Tottenham Hotspur respectively kept them marooned in the relegation zone, having played one more match than the Black Cats.

Cardiff fought back from a goal down to draw 1-1 when Marko Arnautovic's first-half penalty was cancelled out by Peter Whittingham's spot kick after the break.

They moved above Fulham on goal difference into 18th place after the west Londoners went down 3-1 at Spurs in the early kickoff.

Harry Kane netted for the third straight match for Spurs, after halftime, and Younes Kaboul added a third goal in the 62nd minute to keep the London side in sixth spot with 63 points.