It was an awful start for the new Chelsea manager in his first league game on the bench for his old club as they struck the woodwork twice in the first half but paid for their defensive frailties.

Tammy Abraham crashed an early drive against the United bar but the hosts got in front with an 18th minute Rashford penalty after the England forward was pulled down by Kurt Zouma.

Chelsea, who had been the more creative in the opening half, went close to an equaliser when Emerson struck the post shortly before the break.

But the game turned decisively in Ole Gunnar Solskjaer's side's favour when, after a Rashford led counter-attack, Anthony Martial bundled in a low cross from Andreas Pereira in the 65th.

Two minutes later, Chelsea's defence was again exposed when Rashford timed his run to perfection to latch on to a long ball from Paul Pogba and beat goalkeeper Kepa Arrizabalaga with a confident finish.

Substitute Daniel James, a close-season signing from Swansea City, then marked his United debut with the fourth, firing into the bottom corner via a deflection after being set-up by Pogba. 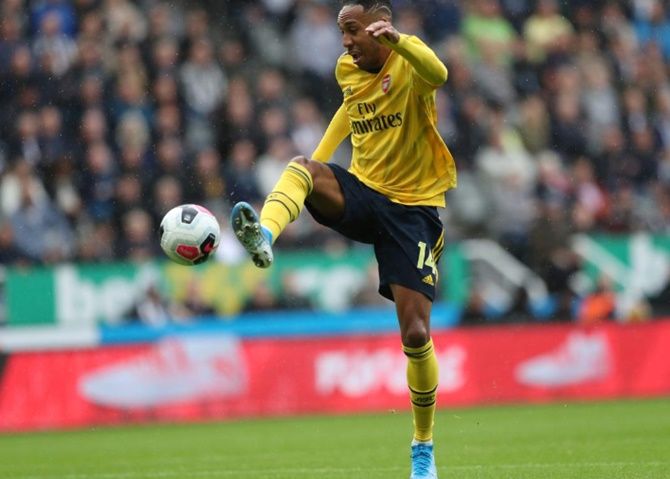 After a largely forgettable first half in which Newcastle were slightly the better side, Arsenal eased to a comfortable three points thanks to Aubameyang’s 58th minute strike.

Newcastle handed 40 million pounds record signing Joelinton a debut up front and he showed some flashes of intent in the first half but the hosts fizzled out after the break.

The Gunners had to wait until April to keep their first away clean sheet in the Premier League last season, but looked solid as they opened their campaign in far better fashion than a year ago when consecutive defeats marked the start of Unai Emery’s tenure following the end of the Arsene Wenger era.

The closest Newcastle came to scoring was in the first half when Jonjo Shelvey’s powerful shot glanced the upright.

“It is always positive for all the squad to win the first game, everyone is happy to get three points and we’re looking forward to winning more games,” Aubameyang said.

The Gabonese frontman has now scored 33 goals in 50 Premier League appearances since joining Arsenal from Borussia Dortmund in February 2018 with only Liverpool’s Mo Salah (36) having scored more league goals in that period.

Heavy pre-match rain and dark skies matched the mood around the stadium which was nowhere near its 52,000 capacity with some disgruntled fans answering the call for a boycott as disenchantment at Mike Ashley’s ownership continues.

While Newcastle have spent in the transfer window, for many fans it has failed to make up for the loss of popular manager Rafa Benitez who left in June having failed to agree a new contract.

Sunday’s gate was 4,000 down on last season’s home average.

The experienced Bruce’s appointment has not exactly sparked the passion of the fans either and there was little energy coming from the stands throughout a cagey clash.

Bruce’s team at least tried to lift the mood in a largely uneventful first half.

Brazilian number nine Joelinton showed flashes of menace, heading one effort wide and then wriggling through to fire in a shot saved by Bernd Leno. Shelvey also struck the woodwork with a deflected shot as Arsenal struggled for tempo.

Arsenal looked more eager after the break and took the lead with a goal of clinical simplicity.

A sloppy pass was intercepted by Ainsley Maitland-Niles inside his own half and he burst forward before picking out Aubameyang who took a sublime touch before guiding a cool finish beyond advancing keeper Martin Dubravka.

With such an influx of exciting talent now available to Emery, Arsenal will move forward full of optimism but for Newcastle, and local boy Bruce, it already appears as though it could be a long, hard season. 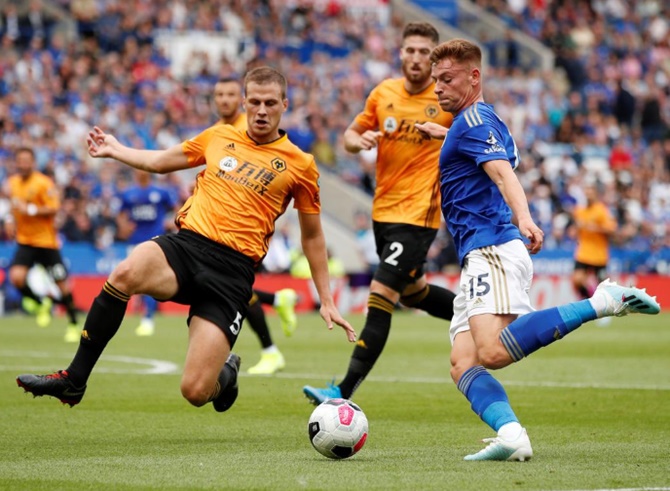 Wolverhampton Wanderers had a goal by Leander Dendoncker ruled out by the Video Assistant Referee (VAR) in an entertaining 0-0 Premier League draw against Leicester City at the King Power Stadium on Sunday.

Wolves thought they had scored six minutes into the second half when Dendoncker blasted in from close range but VAR deemed that the midfielder had headed the ball onto team mate Willy Boly’s arm off a corner before taking the shot.

That was shortly after Raul Jimenez produced the game’s first shot on target but Wolves failed to get the breakthrough as the Mexico striker’s right-footed effort was easily dealt with by Leicester goalkeeper Kasper Schmeichel.

Wolves boss Nuno Espirito Santo said that VAR, which is making a debut in the Premier League this season, had the potential to “ruin the game” for some fans.

“I haven’t seen the images but I trust them. If they saw it, what can we do? Things that weren’t (that way) before shouldn’t be now. We have such a nice Premier League, such a product, we cannot lose that,” Santo told the BBC.

“What I’m concerned about is, let’s not ruin the game.”

Leicester, who dominated possession in the opening period, missed a clear opportunity to take the lead in the 38th minute when Youri Tielemans fizzed a pass into the box but striker Jamie Vardy failed to connect at point blank range.

Wolves could have made Leicester pay for that miss seconds before the break but forward Diogo Jota lost his footing in a shooting position after he won the ball near the halfway line off a wild clearance and charged into the penalty area.