Angry Benitez lashes out at Chelsea board, fans

In a bitter outburst at the fans who have barracked him relentlessly and an angry swipe at the club's board for only appointing him 'interim' manager, Rafael Benitez said on Wednesday he will leave Chelsea at the end of the season.

The Spaniard, his cheeks puffed and flushed, hit out in his news conference following FA Cup holders Chelsea's 2-0 win at second tier Middlesbrough that secured a quarter-final clash with Manchester United.

Abused and jeered from the moment he walked out at StamfordBridge for his first game in charge in November after replacing the popular Roberto Di Matteo, Benitez let his anger spill out in the unlikely settings of Middlesbrough's Riverside Stadium. 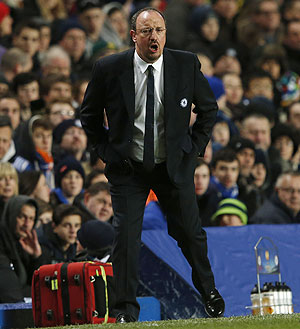 “I have been in charge in football for 26 years, won the Champions League, the Club World Cup, the FA Cup, the Italian Super Cup, the Spanish league twice -- nine trophies -- all the trophies you can win at club level,” Benitez began.

Warming to his task, he added: “A group of fans, they are not making any favour to the team and they are singing and wasting time preparing banners.

“It's because someone made a mistake. They put my title interim manager and I will leave at the end of the season so they do not need to waste time with me, they have to concentrate on supporting the team.”

His comments are unlikely to be appreciated by Chelsea owner Roman Abramovich and with the Russian billionaire not known for his tolerance of dissent, it remains to be seen if Benitez - appointed until the end of the season -- will still be in charge when Chelsea play United in the Cup on March 10.

Benitez has dished up a mixed bag of results since Di Matteo paid the price for the Champions League holders' disappointing defence of their title -- bowing out at the group stage, the first holders to do so.

Many fans still chant Di Matteo's name at games and have made it quite clear that Benitez would never be accepted because of his time in charge of Liverpool and the enmity that stemmed from the run-ins he had with former Chelsea manager Jose Mourinho.

“They are not doing any favours to their club, to the rest of the club and the players,” Benitez said.

“If we cannot achieve what we expect to achieve that is to be in the top four and be in the Champions League next season I will leave, they will stay in the Europa League and they will have to take responsibility.

“They do not create a good atmosphere at StamfordBridge. They have to realise they are making a big mistake.”

Benitez in recent weeks has had to deny media reports of bust-ups with his players, the latest coming on Tuesday when he acknowledged that captain John Terry had shown his frustration after Sunday's 2-0 league defeat at Manchester City.

On Wednesday, Benitez said: “I am the manager and I will be managing the team. I like to manage players and no names so I will pick my team and I will make decisions and at the end of the season I will leave anyway because I am interim.”

Benitez made eight changes from the side that lost at City as second-half goals from Ramires and Victor Moses earned a comfortable, if unconvincing, fifth round win at Middlesbrough.

Chelsea, taken to a replay by third tier Brentford in the previous round, improved after a scrappy first half but got a stroke of luck on 51 minutes when Brazilian Ramires let fly from 20 metres and his well-struck shot took a large deflection.

The Premier League side made the game safe 17 minutes from time after fine work from substitute Eden Hazard.

The Belgian exploited a tiring Middlesbrough defence with a strong run down the left, played a one-two with Oscar before squaring for Moses to double the lead.

Chelsea were rarely troubled by Boro, although Terry was forced to make one timely clearance late in the opening half when Petr Cech made a hash of saving Mustapha Carayol's dipping shot.

Premier League leaders United will host Chelsea in the last eight. Everton play Wigan Athletic in another top-flight clash at GoodisonPark in the first quarter-final a day earlier, followed by 2011 winners ManchesterCity at home to second tier Barnsley.

A Championship (second division) side is guaranteed a semi-final berth with Millwall welcoming Blackburn Rovers to the capital on Sunday.

© Copyright 2021 Reuters Limited. All rights reserved. Republication or redistribution of Reuters content, including by framing or similar means, is expressly prohibited without the prior written consent of Reuters. Reuters shall not be liable for any errors or delays in the content, or for any actions taken in reliance thereon.
Related News: Chelsea, Rafael Benitez, Middlesbrough, Di Matteo, Manchester United
SHARE THIS STORYCOMMENT
Print this article 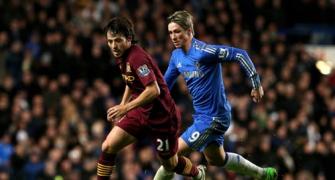 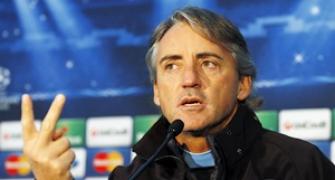 Mancini not looking at the table for another month 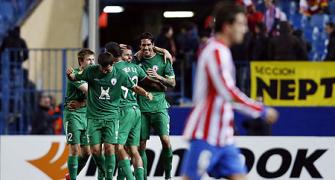 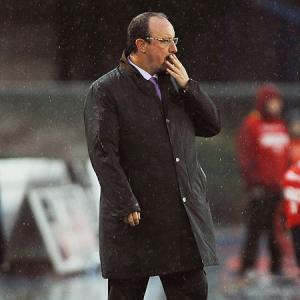 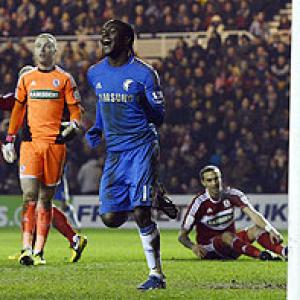