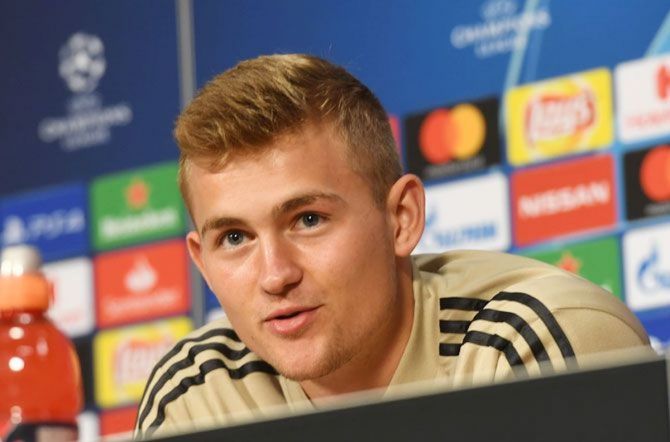 The Netherlands soccer team will protest against Qatar’s hosting of the 2022 World Cup ahead of their qualifier against Latvia in Amsterdam on Saturday, defender Matthijs de Ligt said on Friday.

However, the Juventus player would give no further details on the planned protest, he told a pre-match news conference.

The Dutch protest will follow action taken by the players of Norway and Germany who wore shirts before their World Cup qualifiers this week voicing concern over the conditions for migrant workers in the Gulf country.

It will also come in front of 5,000 spectators who are being allowed into Saturday’s game at the Amsterdam Arena.

"I can give a scoop," De Ligt said, referring to the planned protest.

“You will see what it is tomorrow.”

Germany lined up before kickoff in their opening qualifier against Iceland at Duisburg wearing shirts displaying the message "HUMAN RIGHTS".

Norway staged a similar protest on Wednesday before their match in Gibraltar when their players wore t-shirts with the message: "Human rights, on and off the pitch".

De Ligt said the Netherlands players had also made a decision to display their concern.

“We have talked about it for a long time, it is a sensitive subject but I think it is clear what our opinion is," added the centre back.

“Everyone has read about the situation (with workers) in Qatar, of course, but we’ve started talking and discussing it since the heightened media reports. In the end, we all made the decision and everyone support it.”

The Dutch first raised the topic on Tuesday when coach Frank de Boer made a statement ahead of a news conference before Wednesday's opening qualifier in Turkey, saying he and his team hoped to highlight the plight of migrant workers in Qatar and help to improve their conditions.

"Everyone knows that what is happening there is not good," De Boer said, adding that he rejected the idea of a boycott.

Britain’s Guardian reported a month ago that at least 6,500 migrant workers -- many working on World Cup projects -- had died in Qatar since it won the right 10 years ago to stage the tournament, according to the newspaper's calculations from official records.

On Thursday, a representative of the Qatari World Cup organisers said they had "always been transparent about the health and safety of workers".

"Since construction began in 2014, there have been three work-related fatalities and 35 non-work-related deaths," the representative added.