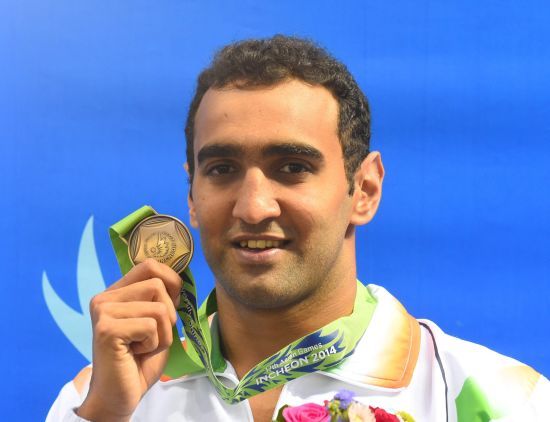 Sandeep Sejwal reacts after winning a bronze in the 50m breaststroke at the Incheon Asian Games. Photograph: PTI

Only the fourth Indian to clinch a swimming medal in the Asian Games, Sandeep Sejwal said his bronze in the 50m breaststroke is a dream realised after eight years of hard work with his coach, Nihar Ameen.

"I shifted from Delhi to Bangalore eight years ago and worked very hard. I have always wanted to win a medal in the Asian Games. It's a dream come true. If I had not won the medal today, I would have felt the time I had spent in Bangalore was a waste," the 25-year-old Sejwal said.

Sejwal, drawn in Lane 5, was leading till the 40 metre mark before he fell behind Kazakhstan's Dmitry Balandin and Japan's Yasuko Koseki to clinch third place in 28.26 seconds, after having clocked a 28.25s in the semi-final heats to qualify for the evening final. 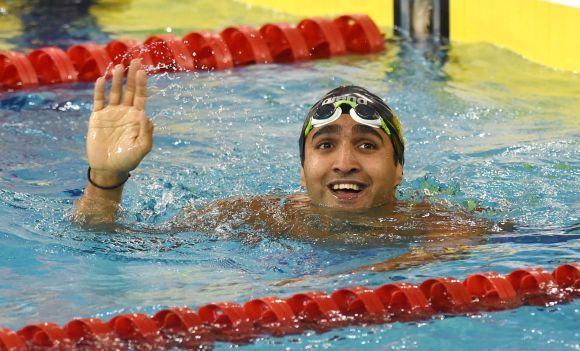 The bronze won by Sejwal is only the fourth – after Sachin Nag's gold in the men's 100m freestyle in the inaugural Asian Games in Delhi (1951), Khazan Singh's silver in the 200m butterfly in 1986 at Seoul and Virdhawal Khade's bronze four years ago at Guangzhou in the 100m butterfly -- medal for the country in the core sport of swimming.

"Four years ago Virdhawal won a bronze. Today I have also won. I feel very proud. I have spoken to my mom after winning the bronze," said Sejwal.

His coach, Ameen, said he was very happy that the only two medals fetched by India in swimming after 1986 have been won by his proteges -- Khade and Sejwal.

"We had focused on winning this medal over the last four years and worked very hard to achieve it," said Ameen.

‘We need to have much more technical support’ 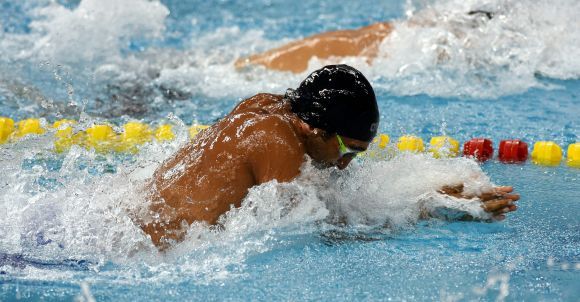 Though not happy with the time he returned in the finals, Sejwal said he thought he could have won the gold or silver at the 40m mark, a point endorsed by Ameen, who said his ward had "a hiccup" (in terms of a stroke), otherwise would have finished higher on the podium.

Asked who would he dedicate the medal to, Sejwal replied: "There are many, and primary among them is the man sitting beside me (Ameen), without whose help I would not have done it."

Ameen lamented that not enough attention is being paid by the country's sports authorities to the discipline, which has a whopping 38 gold medals on offer at the Games.

"We need to have much more technical support, like a dedicated masseur, whereas all the other teams had poolside tables and masseurs to fine tune the swimmer's body. I have to be a one-man army. Also we need to get better technical support to improve our standards. 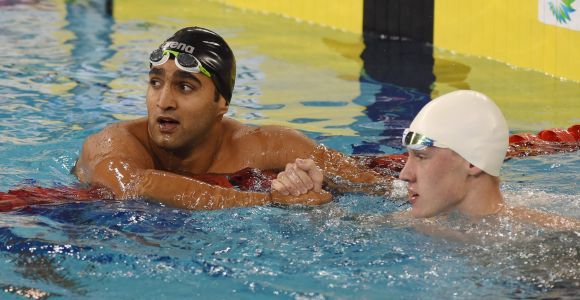 Sandeep Sejwal at the end of the 50m breaststroke at the Incheon Asian Games. Photograph: PTI

"We need scientific back up to catch up with the Chinese and Japanese swimmers. We have only one proper starters' block in the whole of the country; that's in Delhi's Talkatora Stadium," he remarked.

"The facilities in Bangalore, in our academy, are quite decent. We are driven by passion to produce results. I love to see our swimmers attain podium finish and would have been happier if it had been our national anthem that was played," said Ameen.