Continuing its drive against drug cheats following the doping scandal in Indian athletics, the National Anti Doping Agency officials conducted a surprise raid on the P T Usha School of Athletics in Kozhikode, Kerala, on Friday.

A team of officers from Delhi, headed by Senior Project Manager V Jayaraman, checked the rooms of the athletes and also took urine samples.

"The team reached the institute at 12:00 pm and checked rooms of athletes for banned substances and also took urine sample on a random basis. Total of six urine samples were collected which will be brought to Delhi for testing. No food supplements were found in the rooms," he added.

A detailed session of awareness on doping was conducted by the experts from NADA later with the athletes and coaches at the centre.

A programme for education and awareness is also being drawn up for sportspersons in Kerala in view of the forthcoming National Games, which includes printing and distribution of educational material in Malayalam.

"NADA will continue its drive against doping in sports in the country and surprise checks will be carried out at other centers where athletes are training," Bhatnagar said.

The country was hit by one of its worst doping scandals, with eight track and field athletes, including Asian Games double gold medallist Ashwini Akkunji, returning positive tests for banned anabolic substances.

Signal Intl lawsuit could be largest in US history 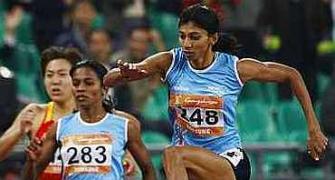