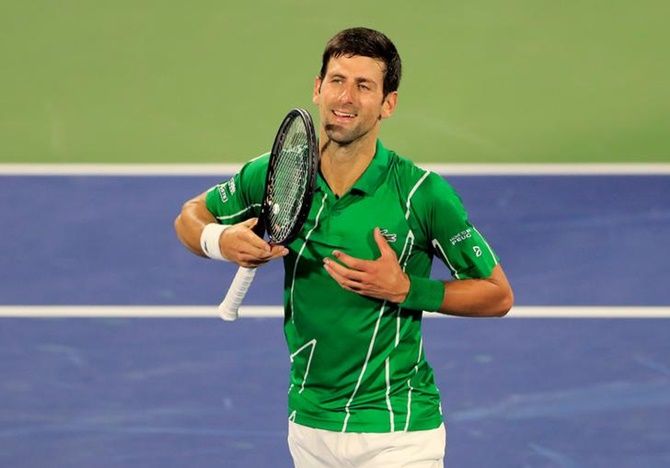 Novak Djokovic extended his unbeaten start to the season to 15 matches as he swatted aside German veteran Philipp Kohlschreiber 6-3, 6-1 with ease on Wednesday to reach the Dubai Tennis Championships quarter-finals.

The Serbian world number one, who lost to Kohlschreiber at Indian Wells a year ago, was entirely dominant, sending down 23 winners and losing only 10 points on his serve as he wrapped up the win in 59 minutes without facing a break point.

"It was a great performance," Djokovic said in an on-court interview. "I enjoyed the way I played, coming out with the right focus and tactics."

Next up for the 32-year-old is a meeting with Russian seventh seed Karen Khachanov.

"I've had some interesting battles with him," Djokovic added. "He's a great guy, a very powerful player. He's one of the guys who is a pretender to be top five, top 10.

"He is very dedicated, so hopefully I'll be as sharp as I have been in the past two matches and start well."

The match marked the second time in five days that Tsitsipas faced Bublik, who also lost to the Greek at last week's Marseille Open, where he successfully defended his title.

Tsitsipas will play Germany's Jan-Lennard Struff for a place in the semi-finals.

Struff made short work of Nikoloz Basilashvili in their last-16 match, beating the Georgian 6-1, 6-0 in 39 minutes.

Dan Evans pulled off the day's most dramatic escape in his round-of-16 meeting with Frenchman Pierre-Hugues Herbert, the Briton saving three match points in a third-set tiebreak before going on to win 7-5, 3-6, 7-6(7).

Former champion Petra Kvitova needed all her considerable experience to beat Latvian Jelena Ostapenko 6-2, 5-7, 6-1 and reach the quarter-finals of the Qatar Open on a windy Wednesday in Doha.

The Czech number eight seed, who won the Qatar title in 2018, looked on course for a routine victory after running away with the first set, but former French Open champion Ostapenko clawed her way back into the contest with some gutsy hitting from behind the baseline.

The 22-year-old, who rivals twice-Wimbledon champion Kvitova in terms of sheer power, improved her first serve percentage from 52% to 73% in the second set and converted four of her six break point chances to level the match.

Both players struggled for control in the swirling wind that ripped through centre court, but it was the 29-year-old Kvitova who kept her head as Ostapenko faded badly in the decider.

"There's no chance to have tactics in this wind," Kvitova said in an on-court interview. "It's difficult to put the serve in and she returned the second serve well. I needed to be more patient. It was about taking time and it was really difficult."

Kvitova served nine aces but made an equal number of double faults, while Ostapenko also struggled in the conditions, with 11 double faults of her own.

The Latvian also made a typically high 32 unforced errors, and hit 11 fewer winners than Kvitova, which sealed her fate.

Top seed Ash Barty advanced to the quarters via a walkover after her opponent Elena Rybakina withdrew with a strain in her leg.

Barty will face the winner of the match between Spanish 11th seed Garbine Muguruza and unseeded Ukrainian Dayana Yastremska, which will take place later on Wednesday.

Russia's Svetlana Kuznetsova also advanced via a walkover after her American opponent Amanda Anisimova withdrew due to illness.