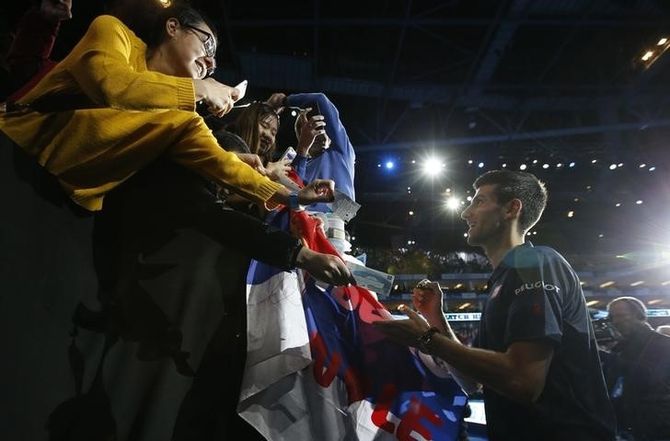 Defending champion Novak Djokovic trounced stand-in David Goffin 6-1 6-2 for a clean sweep of his group at the ATP World Tour Finals on Thursday but spiced up a leisurely afternoon workout by picking a row with the umpire.

The world number two, who will be joined in the last four by Milos Raonic after the Canadian beat Austrian Dominic Thiem 7-6(5) 6-3, began the week at London's O2 Arena quarrelling with a reporter and despite being relatively untroubled on court, there has been an edginess about the 12-times grand slam champion.

It surfaced again against Goffin, who pocketed $179,000 for his 69-minute cameo appearance having stepped in to replace Gael Monfils who withdrew citing a rib injury.

While serving at 3-1 the Serb was given a time violation warning by chair umpire Fergus Murphy and let rip at the changeover.

"You have no clue about the game," an irate Djokovic told Murphy before turning to continue the debate with tournament director Tom Barnes who was hovering nearby. 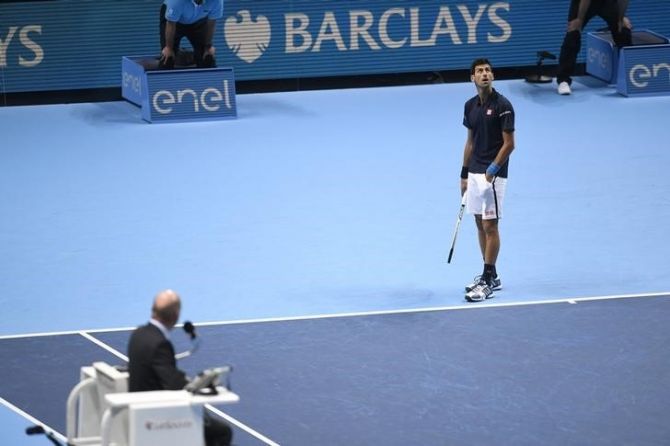 Djokovic's complaint that Murphy had punished his first transgression rather than offer a quiet word seemed fair enough, although his reaction was out of context in a match that lacked any kind of nervous tension.

There was more at stake later, when Raonic, who did not face a single break point, became the first Canadian to reach the last four when he downed Thiem in straight sets.

There were no breaks in the opening set but Raonic stole his opponent's serve in the first game of the second and did not look back, ending the contest on his second match point when Thiem netted a backhand.

Belgium world number 11 Goffin had been hanging around all week in case of a withdrawal. He tried his best to make a match of it but looked off the pace from the moment he double-faulted to give Djokovic his first break in the fourth game.

"Yesterday I was feeling a bit like I was on holiday," Goffin, who would have received a cool $100,000 even if he had not been required for action, told reporters.

"All of a sudden someone tells you you have to play in front of 15,000 people against Novak."

It was poor value for the O2 Arena crowd who probably expected something more competitive -- not that Djokovic was too concerned. He was able to conserve energy for what could yet be a Sunday showdown with Andy Murray, the man who ended his 122-week reign as world number one last week.

After losing a colossal points lead over the Briton since beating him to win the French Open, Djokovic is now two wins away from grabbing it back.

He bridled at suggestions that it would be a surprise if he did achieve that by claiming a fifth successive London title.

"I guess I do not have the same perception of surprise as you do," the 29-year-old said when asked the question. "To me it wouldn't be a surprise."

Djokovic also shed light on his row with Murphy which was drowned out by blaring music in the arena.

"I accept that I'm one of the players that takes the most time," he said. "But I think it's fair, correct and respectful towards a player that if you go over the first time, you at least get a head's up.

"That's all I'm asking for to be honest."

With wins already against Thiem, Raonic and Goffin, Djokovic has now won 21 of his last 22 matches at the tournament.

Who he faces in the semi-finals is still to be decided.

Murray is favourite to win the John McEnroe group and so avoid Djokovic but should he lose to Stan Wawrinka on Friday he could finish runner-up. Kei Nishikori is also a possibility.

"As a player all you can wish for is that everything is in your hands," said Djokovic.

© Copyright 2021 Reuters Limited. All rights reserved. Republication or redistribution of Reuters content, including by framing or similar means, is expressly prohibited without the prior written consent of Reuters. Reuters shall not be liable for any errors or delays in the content, or for any actions taken in reliance thereon.
Related News: Novak Djokovic, David Goffin, Milos Raonic, Fergus Murphy, ATP World Tour Finals
SHARE THIS STORYCOMMENT
Print this article