Djokovic 'sad and empty' after US Open disqualification

'I need to go back within and work on my disappointment and turn this all into a lesson for my growth and evolution as a player and human being.' 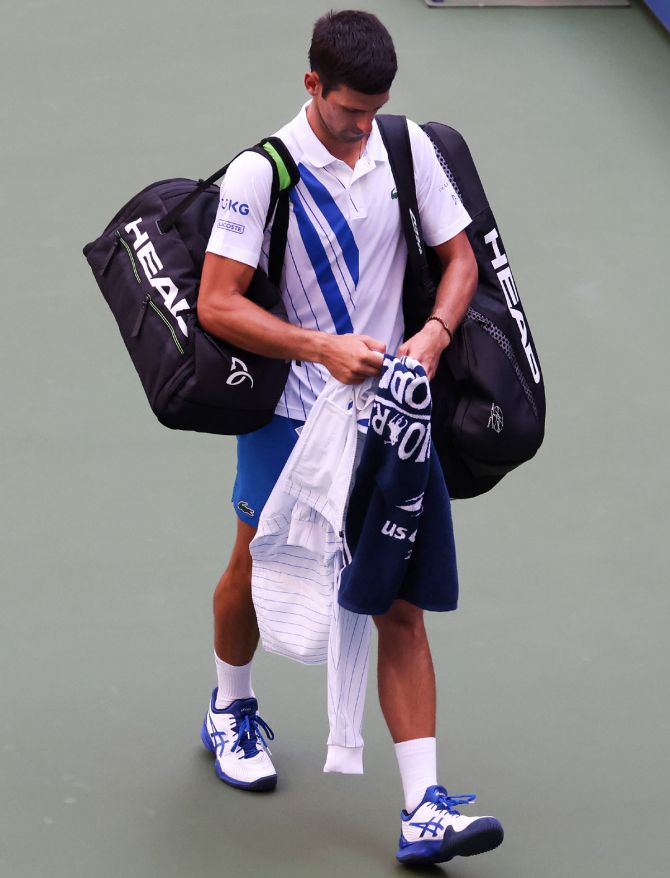 IMAGE: World number one Novak Djokovic was disqualified from his US Open fourth round match against Pablo Carreno Busta on Sunday after the Serbian struck a line judge with a ball following a point. Photograph: Al Bello/Getty Images

Novak Djokovic said he was "sad and empty" after a being disqualified from the US Open on Sunday after hitting a line judge in the throat with a ball during his fourth-round match against Spain's Pablo Carreno Busta.

"I checked on the lines person and the tournament told me that thank God she is feeling ok. I‘m extremely sorry to have caused her such stress. So unintended. So wrong. I’m not disclosing her name to respect her privacy," the world number one said on Instagram.

Having dropped serve to trail 5-6, the Serb swatted a ball reasonably hard to the back of the court, inadvertently striking the line judge, who screamed out in pain as she fell to the ground.

Tournament referee Soeren Friemel came out on to the Arthur Ashe Stadium and spoke to chair umpire Aurelie Tourte and Andreas Egli, the Grand Slam supervisor, before a long chat with the 33-year-old Serb.

"As for the disqualification, I need to go back within and work on my disappointment and turn this all into a lesson for my growth and evolution as a player and human being," Djokovic, who was chasing an 18th Grand Slam title added.

"I apologize to the @usopen tournament and everyone associated for my behavior... I’m so sorry."