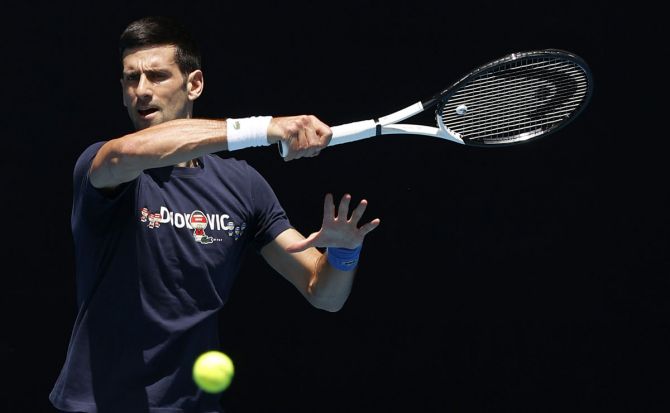 IMAGE: Novak Djokovic said he hopes to compete for "many more years" but added that the freedom to choose what he wants to put into his body is more important to him than any title. Photograph: Darrian Traynor/Getty Images

Novak Djokovic is prepared to miss the French Open and Wimbledon if COVID-19 vaccination becomes mandatory at the Grand Slams but he is not against inoculation, the world number one tennis player said.

Djokovic, who is unvaccinated, was barred from competing in this year's Australian Open, depriving the 34-year-old Serbian of the chance to become the most successful men's player of all time with 21 Grand Slam titles.

He was instead deported from Australia after an 11-day rollercoaster experience involving two visa cancellations, two court challenges and five nights in two stints at an immigration detention hotel where asylum seekers are held.

"I understand the consequences of my decision," Djokovic told the BBC, adding that he was prepared not to travel to Australia due to his unvaccinated status.

"I understand that not being vaccinated today, I am unable to travel to most of the tournaments at the moment. Yes, that is the price that I'm willing to pay."

A steely-eyed Djokovic said he hopes to compete for "many more years" but added that the freedom to choose what he wants to put into his body is more important to him than any title.

The Serbian, however, distanced himself from the anti-vaccination movement and said he is keeping an open mind about taking the jab.

"I was never against vaccination," he said, adding that he took vaccines as a child. "But I've always supported the freedom to choose what you put in your body.

"I understand that globally, everyone is trying to put a big effort into handling this virus and seeing, hopefully, an end soon to this virus."

Djokovic, who won Wimbledon and the French Open last year, is set to return to competitive action at an ATP tournament in Dubai next week for the first time since his deportation from Melbourne ahead of the Australian Open.

Another win at Melbourne Park, where Djokovic has won nine titles, would have statistically made him the most successful men's player but instead it was his long-time rival Rafael Nadal who nudged ahead of him by lifting the trophy last month.

The Serbian said he is ready to sacrifice his shot at the milestone. Swiss Roger Federer, who is recuperating from multiple knee surgeries, has also won 20 major titles.

Djokovic fuelled widespread anger in Australia when he was given a medical exemption from mandatory COVID-19 vaccination to compete at Melbourne Park on grounds that he recently contracted the virus.

But he was detained by immigration authorities on arrival, released by a court order and then detained again before being deported.

The case stoked global debate and Australian Immigration Minister Alex Hawke said Djokovic could be a threat to public order in the country because his presence would encourage anti-vaccination sentiment.

"I was really sad and disappointed with the way it all ended for me in Australia," Djokovic said, adding that he was deported despite following all rules. "It wasn't easy.

"The reason why I was deported from Australia was because the Minister for Immigration used his discretion to cancel my visa based on his perception that I might create some anti-vax sentiment in the country or in the city, which I completely disagree with."