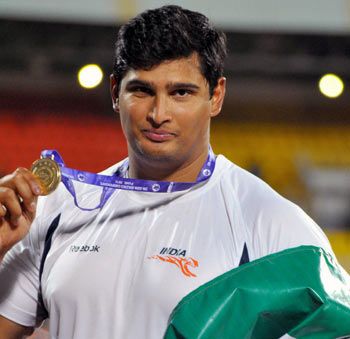 "For obvious reasons they (AIBA) have to review their system to avoid controversies relating to suspension of athletes. There has to be a clear way to find out that everyone thinks one person won, then the referees are disagreeing -- that's not right," he told PTI in an exclusive interview on Wednesday.

Gowda, who won the 2014 Commonwealth Games gold with a throw of 63.64 m, said it is frustrating for any athlete to get robbed off their medal.

"If somebody clearly wins, and to rob them off that moment, that's worse thing. It is the opposite of sports. It is politics. So, I totally understand the frustration that she must be going through (Sarita Devi)," he added.

Gowda said it is disappointing to come across such incidents in boxing every year due to disagreements of referees.

"I follow boxing. Every year, there is always handful of faces that people watch. Clearly 99 per cent people will say this person won, but these three people -- the referees -- are the only people, who disagree," he said.

Asked whether he was supporting Sarita Devi, Gowda said, "I am not supporting, but there has to be some fairness as is evident in track and field events. It is clear he ran faster than this person and he or she wins. I don't want to go into the full details of individual situations."