After a scintillating start on Friday, day two of the event turned out to be a bit of a dampener for Indian boxers.

Balwinder, playing in the welter weight category, was the first to take to the ring and was up against Roniel Iglesias of Cuba's main team.

Iglesias, a bronze medallist at the 2008 Beijing Olympics and gold medallist (64 kg) at the Milan World Championship, made things difficult for the 20-year-old.

Balwinder, who was a silver medallist at the same event last year, did his best against the former world champion but the Cuban had an answer for everything.

In the end, the technique and experience of the Cuban fighter turned out to be superior to that of Balwinder's, who lost on points 12:26.

The second Indian boxer in the fray, Olympian Dinesh Kumar also came up short against the Yamaguchi Florentino of Brazil 14:24 on points.

The final score, however, does not do justify the bout as the 20-year-old played with all his heart.

Despite fighting valiantly, Dinesh unfortunately could not translate all his punches into points. On the other hand, Florentino, who is a prized WSB fighter, was throwing more punches at close range and that worked in the Brazilian's favour.

On Sunday, five Indian boxers will take to the ring at the Ramon Fonst multi-sports hall.

Santosh Harijan, who stunned the officials and spectators with his superb performance in the first round, will fight Mozambican Cramido in the second round.

Source: PTI© Copyright 2021 PTI. All rights reserved. Republication or redistribution of PTI content, including by framing or similar means, is expressly prohibited without the prior written consent.
Related News: Balwinder Beniwal, Yamaguchi Florentino, Dinesh Kumar, CWG, WSB
COMMENT
Print this article
Bangladesh to India: Take back your elephants
Indian boxers bag three gold
Who are the <i>paisa vasool </i> players in IPL-4? 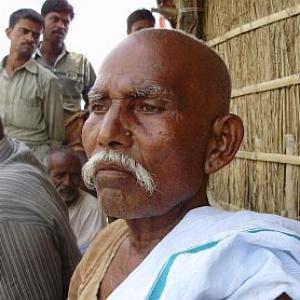 40 years on, these villagers await rehabilitation