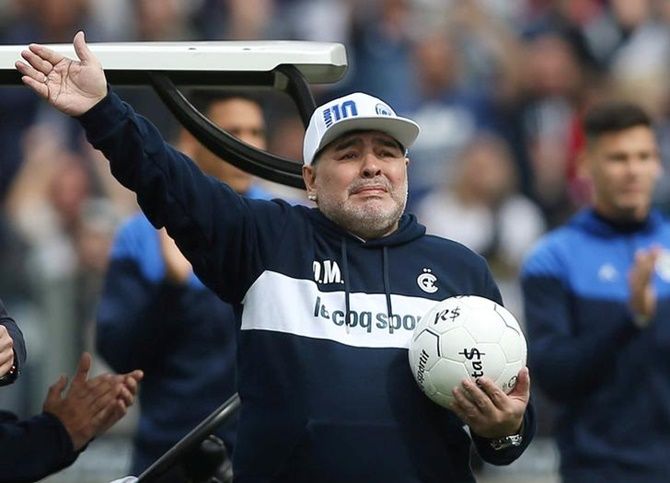 IMAGE: Diego Maradona, which premiered at Out of Competition during the 72nd Cannes Film Festival, will have its first screening in Mumbai on Friday. Photograph: Agustin Marcarian/Reuters

Indian-origin British filmmaker Asif Kapadia says he lived with the idea of making a documentary on Diego Maradona for 25 years, since the 1990s when he was a film student and read a book on the legendary footballer.

During Kapadia's growing up years in London, Maradona was the greatest. But the passionate football fan said he was more interested in exploring the persona of the man in his eponymous film, which releases in India on October 11.

"When I was growing up, Maradona was the best player in the world. There was no doubt about it. I'm interested in him as a character though. That's the thing. There's been lots of great players. He was the best," said Kapadia, who has won multiple awards for his documentaries Senna and Amy.

“In the mid '90s, when I was a student, I read a book about him. That was like the germ of the idea of thinking, this guy's life is crazy, amazing and epic. At the time, I was still making short films. But I remember thinking it will be great if one day I could make a film on Maradona. It took 25 years, but there you go," the director said.

Kapadia is considered one of the world's most bankable biographical documentary makers.

Senna is a 2010 film based on the late Brazilian motor-racing champion Ayrton Senna. The film won BAFTA Awards for Best Documentary and Best Editing.

Six years later, Amy, the movie on British singer-songwriter Amy Winehouse, who died at age 27 in 2011, went on to win the Best Documentary BAFTA, Grammy for Best Music Film and Academy Award for Best Documentary Feature.

Diego Maradona, which premiered at Out of Competition at the 72nd Cannes Film Festival, will have its first screening in Mumbai on Friday.

Kapadia, who last visited India in March, said he is excited to be in the country again.

"I come here a lot and I'm happy to be here again. Any excuse for me to come to India. Whenever I can, I come here," he said.

"Farhan has gracefully accepted to host the show and interview Asif after the screening tomorrow," Bijli added.

He said he wanted to get Diego Maradona to India as the film resonates across cultures and countries.

"I had been following Asif's work for the longest time since The Warrior. We partially distributed Senna. Then came Amy, which was one of my favourites, which didn't come to India.

"I was aware he was making a film on Maradona next. Even though we're a cricket-loving nation, we still have a sizable population that loves football and I think anyone and everyone knows Maradona," Bijli said.

The 130-minute film, which will release in India in around 50 to 75 screens, focuses on the Argentine football legend's turbulent and triumphant seven-year stint with Italian professional football club Societa Sportiva Calcio (SSC) Napoli, which he joined in 1984 for a then world record fee.

Diego Maradona, distributed by PVR Pictures in the country, captures the life and times of the genius through his triumphs and tribulations of the 1980s and early 1990s. It was a period during which Maradona saw great highs, including Argentina's 1986 World Cup victory, and lows, which included messy run-ins with authority.