I am fit enough to be India's hockey coach: Dhanraj

At a time when Indian hockey is looking for a national coach after Spaniard Jose Brasa's contract was not renewed, former captain Dhanraj Pillay said he is the fittest person for the job.

One of the greatest players of Indian hockey, Pillay said removing Australian Ric Charlesworth from the coach's job was a blunder while appointing Brasa was a mistake.

Asked about Brasa's successor, Pillay said on Thursday, "Why not Dhanraj Pillay ... I am the fittest person to coach Indian team at the moment."

Pillay, who was in Kolkata as the coach of Air India in the ongoing Beighton Cup, said Hockey India should refrain from getting a foreign hand as they have so many legendary players in the country who can handle the task easily.

"If any foreign coach was suitable it was (Ric) Charlesworth, but we have made a blunder by removing him. If he is not there, then somebody from us should be appointed the national coach. 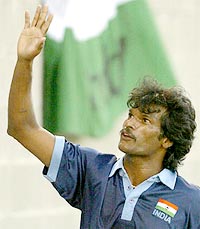 "There is no point spending so much in getting a foreign coach. We have enough ex-players who know about hockey like me... If the same money is spent on an Indian coach, our hockey will progress like anything," he said.

Disappointed with the bronze medal finish at the Asian Games in Guangzhou recently, Pillay blamed it on the selection. "The selection was not fair. There were some three-four good players who were not part of the side."

Having failed to secure automatic qualification for the 2012 Olympics, Indian hockey should start from scratch now, Pillay said.

"We have a tough road to qualification for 2012 London Olympics. We have to start working now. There are a lot of hockey talents from various parts of the country. We have to unearth them.

"Immediately a new coach's name should be announced. We have a lot of work to do ahead. There is no dearth of talent. We have to go to interior places like in states of Jharkhand, Uttar Pradesh, Madhya Pradesh, Bihar, Orissa and Haryana. We have to pick them from grassroots level.

"The problem with us is that nobody wants to work at ground level. If given the responsibility, I will ensure that there is a specialist coach to look into all the departments of the game."