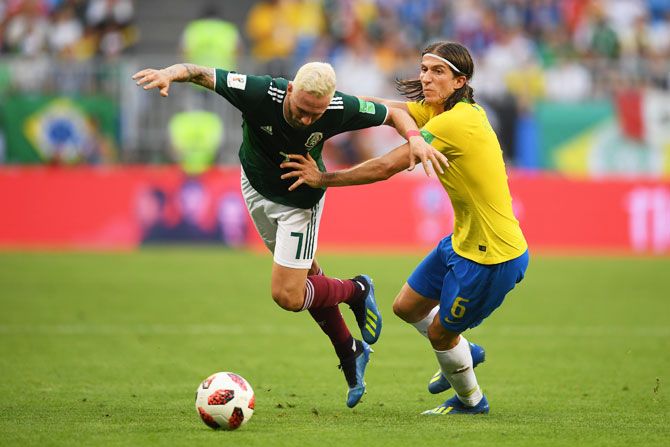 IMAGE: Mexico's Miguel Layun is tackled by Brazil's Filipe Luis during the World Cup Round of 16 match on Monday. Photograph: Matthias Hangst/Getty Images

Neymar inevitably grabbed the headlines and plaudits again after Brazil's 2-0 World Cup win over Mexico on Monday but their real campaign heroes have been elsewhere.

Brazil's defensive record under coach Tite has been remarkable, with only six goals conceded in 25 matches, and they have been just as miserly in Russia where they have only conceded one goal.

Their round-of-16 tie against Mexico was another object lesson in defending from the central pairing of Thiago Silva and Miranda, assisted by full backs Fagner and Filipe Luis and given an extra layer of protection by Casemiro in midfield.

Many teams would have wilted under the pressure as Mexico poured forward in the first 20 minutes just as they had in their famous 1-0 win over Germany -- but Brazil were made of sterner stuff. 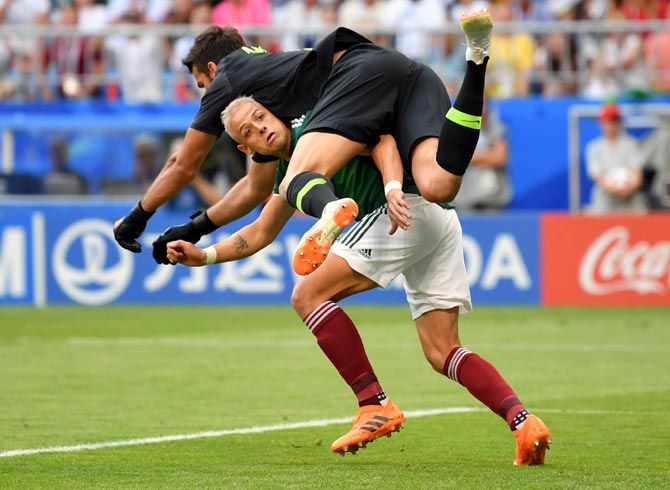 When Hector Herrera received the ball on the edge of the penalty area in what seemed like a good shooting position, he was immediately surrounded by four defenders and his shot was charged down.

One of the key differences since Tite took over two years ago has been that Brazil try to win the ball cleanly in midfield.

Under his predecessors, Dunga and Luiz Felipe Scolari, Brazil adopted a destructive form of tactical fouling with the aim simply to stop the opposition playing.

For Tite, on the other hand, a foul in midfield is a wasted chance to win back possession and start a new attack.

After his team beat Austria 3-0 in a warm-up friendly, Tite lauded his players for only conceding eight free kicks. 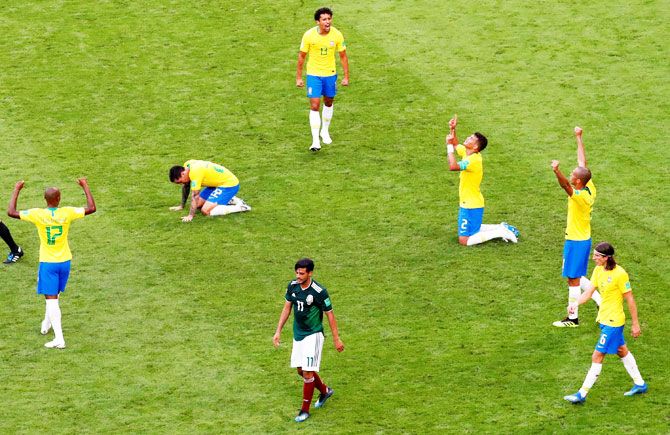 "That shows that we use aggressive marking to try and win the ball and then come out playing," he said.

On Monday, they conceded even fewer -- six free kicks.

Brazil are usually thought of as an attacking team but, in fact, they take very few risks, usually parking three players on the halfway line even when they win a corner, and on Monday they allowed Mexico to enjoy 53 per cent of possession.

They have looked even more solid now that Filipe Luis, well-schooled in the art of marking under Diego Someone at Atletico Madrid, has replaced the more cavalier Marcelo at left back.

There were plenty of other examples of Brazil's defensive prowess to admire on Monday such as a superbly timed tackle by Fagner on Hirving Lozano in the second half.

Even in stoppage time, when Lozano got the ball in a dangerous position in the penalty area, he was immediately surrounded by four defenders. There was simply no way they were going to allow Mexico through.