Defence was our only option, says Czech coach

Czech Republic's Michal Bilek banked on a defensive strategy to keep Portugal at bay on Thursday but they ran out of steam and it was a matter of time before their Cristiano Ronaldo-inspired opponents capitalised.

"We boosted our defence. We knew they would attack," the Czech coach told reporters after a 1-0 defeat to a Ronaldo header in their quarter-final clash at Euro 2012. 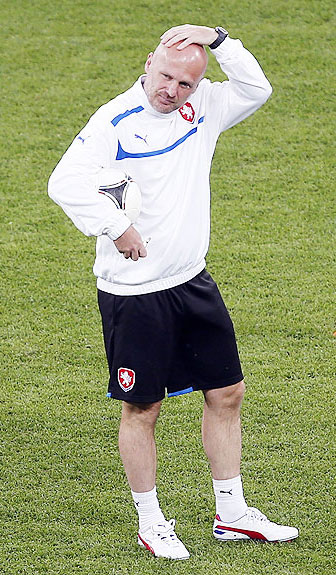 "In the first half we managed, but in the second we were losing strength and it was easier for Portugal to move in and score.

"We knew we weren't on their level when it comes to football," Bilek said.

The Czechs barely tested the Portuguese defence and most of the game took place in their half but Bilek said he did not regret his approach.

"If you open up against Portugal, they will punish you. It's very difficult to stop them," he said.

The Czechs could only contain Portugal captain Ronaldo for so long. The moody winger was definitely in the mood and scored with a powerful header 10 minutes from time after twice hitting the post with earlier efforts.

"Ronaldo is just better. He knows how to play with his head, both feet," said Bilek.

The Czechs, who got out of Group A despite an embarrassing 4-1 loss to Russia in their opening match, were missing their own inspirational captain Tomas Rosicky through injury.

Bilek brought in the young, inexperienced Vladimir Darida in the hope he would offer a similar creative spark but Rosicky has big boots to fill and the risky ploy failed.

"We always miss him (Rosicky) when he's not playing," Bilek said. "He's an exceptional player. But the whole team showed character and we didn't give up,".

"I can say it was a great success to go into the quarter-finals after the disappointing match with Russia. We can hold our heads high," he added.