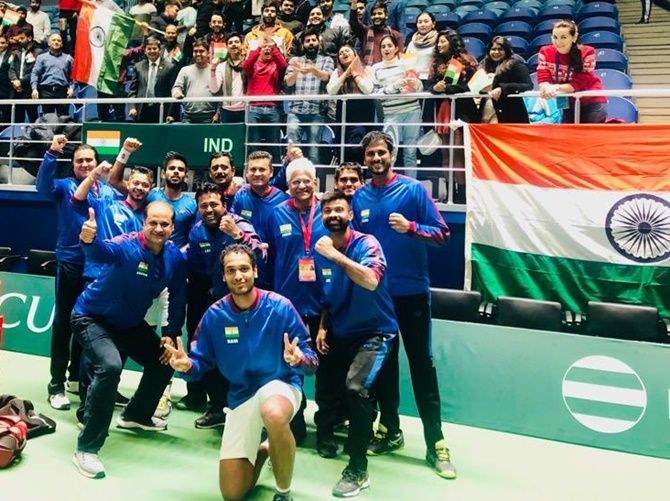 IMAGE: India won all the matches in a tie for the first time since February 2014. Photograph: Leander Paes/Twitter

Veteran Leander Paes bettered his own Davis Cup record by winning his 44th doubles match, this time partnering debutant Jeevan Nedunchezhiyan, as India blanked Pakistan 4-0 on Saturday to earn a spot in the 2020 Qualifiers.

Pakistani teenagers Mohammed Shoaib and Hufaiza Abdul Rehman were no match for the Indian combination of the battle-hardened Paes and Jeevan, who needed just 53 minutes to win 6-1, 6-3.

Last year, Paes became the most successful doubles player in the history of Davis Cup when he won his 43rd match, surpassing Italian great Nicola Pietrangeli during the tie against China.

"This was my 44th win but it felt like my first. All my wins are special. Engraving India's name to record books is something special for me and I am passionate about it. Jeevan was playing his first match and I took the weight of that pressure on my shoulders being the responsible senior partner," Paes said.

"It was about staying solid today. Jeevan has a big heart, he loves to play for flag. I am proud to share the court with him. These guys keep me young, fresh and vibrant. They bring out the best in me. We have got a great mix of different generations and different age groups. It's lot of fun to be back to playing for India again," added the winner of 18 Grand Slam titles.

His record of 44 wins in 57 ties is unlikely to be broken anytime soon as except him, none of the active doubles players feature in the top-10 list. Belarusian Max Mirnyi, at number three, has 36 wins but has not played on Tour since 2018.

While Paes is at top of the heap in the doubles, the legendary Indian stands fifth in the list of players for total number of wins with 92-35 win-loss record.

He now has 92 total wins, including 48 in singles. One more win will take him to fourth spot, ahead of Spain's Manuel Santana, who has 92-28 win-loss record.

In the reverse singles, Sumit Nagal trounced Yousaf Khalil 6-1, 6-0 for his second straight win. Both the sides opted not to play the dead fifth rubber. The fourth rubber is played even if the outcome of the tie is decided after the first three matches but the rules permit teams to skip playing the dead fifth rubber.

"It was an easy win, I understand they are young players, need experience. Today was my last match of the year and I can't complain. It has been a fantastic year for me," said Nagal after his win.

Saturday's result means India have won all the matches in a tie for the first time since February 2014 when they had blanked Chinese Taipei 5-0 in Indore.

"We discussed this amongst ourselves that we all strongly feel that we want to dedicate the win to armed forces, especially to the families who lost their loved ones on the borders in protecting our families. So we will dedicate this win to the Indian Army," said Rajpal, who had replaced Mahesh Bhpathi in captain's chair.

Pakistan's top players Aisam-ul-haq Quershi had pulled out of the tie, protesting against ITF's decision to shift the matches to a neutral venue, citing security concerns in Islamabad, the original venue.

India will now face world number two Croatia for the Qualifiers in an away tie, to be held on March 6-7. Twenty-four nations will go head-to-head in a bid to win one of 12 qualifying spots for the Davis Cup Finals.

The 12 losing nations will compete in World Group I ties in September 2020 while the winning nations will join the six nations who have already qualified for the Finals - the 2019 semi-finalists, Canada, Great Britain, Russia and Spain, and the 2020 wild cards, France and Serbia.

In the third rubber, Hufaiza and Shoaib began by holding serve in the opening game of the match, but the Indians broke the teenagers in the third game before holding their own for a 3-1 lead.

Paes and Jeevan took control of the match with another break of serve in the fifth game. Jeevan served a double fault at 30-15, but the Pakistanis could not put pressure on their rivals, as India zoomed to a 5-1 lead.

Serving to stay in the set, Shoaib was down 0-40, giving India three chances to close the opening set. Paes and Jeevan grabbed the second.

The Indians had a few chances to break their rivals early in the second set but the Pakistani duo held its nerves to save them. There was some fight in the second set, which was locked 3-3.

Paes and Jeevan got a break in the eighth game to take a 5-3 lead and the former served out the match in the next.