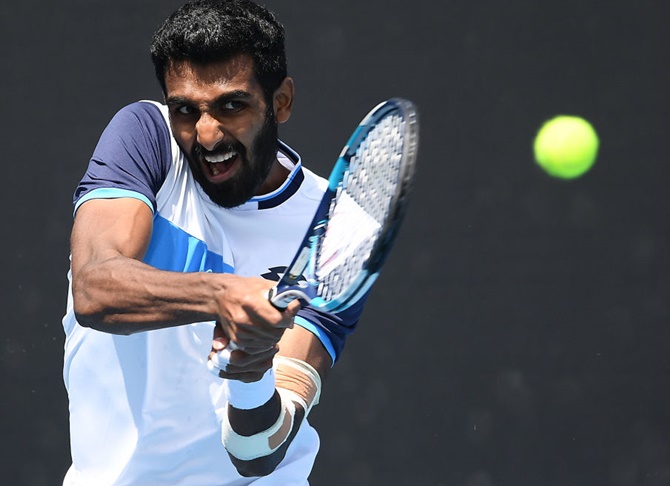 IMAGE: Prajnesh Gunneswaran frittered away the advantage of winning the first set and lost to Bora Gojo in the first singles of the Davis Cup qualifier, in Zagreb, on Friday. Photograph: Quinn Rooney/Getty Images

Bora Gojo and Marin Cilic gave Croatia a 2-0 lead over India, winning the opening singles, in their Davis Cup qualifier in Zagreb on Friday.

India's strategy to target Gojo fell flat as the young Croat proved too canny for the higher-ranked Prajnesh, winning in an hour and 57 minutes.

In the second singles, games went with serve as both Ramanathan and Cilic played safe, waiting for the other to err. However, in the tie-breakers it was Cilic's experience at the crunch that won him the day.

Gojo had not won a singles match in the Davis Cup earlier and Indians were hoping that the trend would continue. However, Gojo peppered returns on Prajnesh's backhand and served big. Most importantly, he handled pressure better than the Indian.

Prajnesh, ranked 132, had a break chance in the very first game of the match but Gojo saved that with an ace. The Croat served big and hit consistently on the backhand of the Indian, who had two more chances in the fifth game to break his opponent but could convert none.

Gojo, though, kept providing the openings and Prajnesh finally drew first blood when the Croat hit a forehand long in the seventh game.

Some good defending by Prajnesh meant that long rallies were in play and that worked in the Indian's favour. Gojo's unforced errors hurt him as one such forehand error handed Prjanesh the opening set after 39 minutes.

Prajnesh began to play aggressively from the beginning of the second set, going for his shots and, in the process, faced six break-points in the first game, which lasted 11 minutes.

The left-hander saved five but Gojo found a backhand volley winner after charging to the net to nose ahead. Prajnesh had chances to get the break back but squandered them. One reason for that was that Gojo grew in confidence and controlled his errors.

Gojo changed tactics and started advancing to the net often and burying easy volleys. His big serve aided him in doing that.

Prajnesh had to hit deep returns to negate it but Gojo did not let him do that and opened up a comfortable 5-3 lead and served out the set with an overhead volley winner.

A backhand error put Prajnesh down by two break chances in the third game, which he saved, but another backhand flew over the baseline to give Gojo another chance which he converted to cause ripples in the Indian camp.

A fired up Gojo came out all guns blazing to consolidate the break, making it 3-1. Prajnesh was feeling the heat now and his backhand melted as unforced errors put him down 1-4 in the decider.

The comeback from Prajnesh did not happen and Gojo walked off the court jumping with joy.

In the second singles, Ramanathan tormented Cilic with a series of brilliant forays to the net while the Croatian replied with some lightning serves and forehand winners.

The Indian No.2 took a 6-5 lead in the tie-break and having saved two set points himself after Cilic had turned the tables, handed the lead to his opponent with a double fault.

Cilic may have expected things to go his way in the second set but Ramanathan kept battling away and matched the Croat in every department to force another tie-break.

Ramanathan took a 2-0 lead, but fell behind 5-4 before he wasted a set point.

Cilic, who sent down 18 aces, then squandered two match-points before clinching the contest when the Indian sent a forehand beyond the baseline. 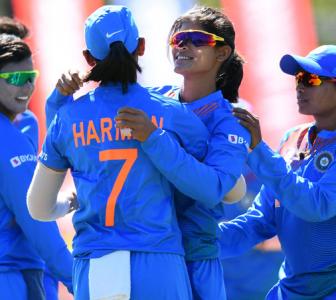 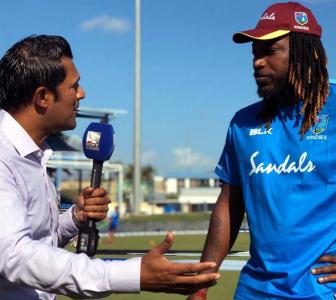 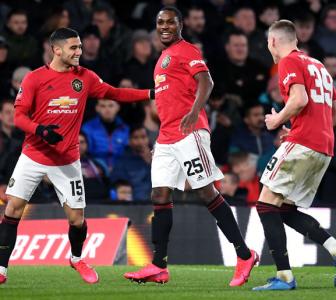 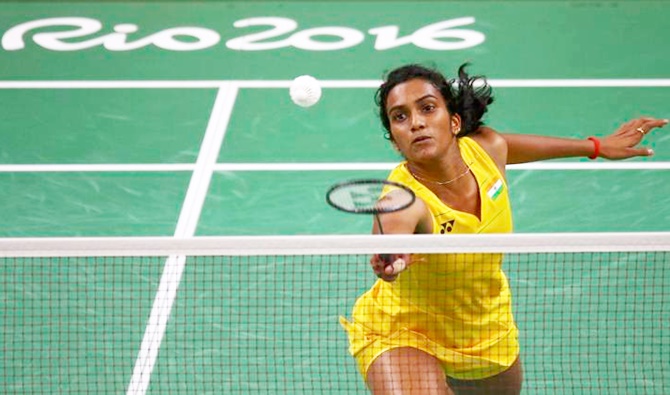