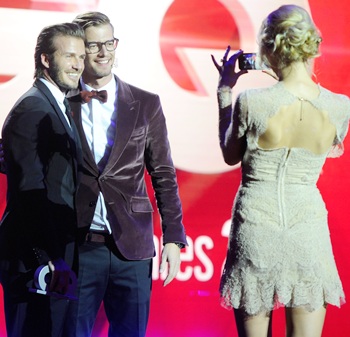 Retired English soccer star David Beckham toured potential stadium sites in Miami on Wednesday, signalling he is forging ahead with his interest in owning a new Major League franchise in the United States.

It was the second time in five months that Beckham, a former star with Manchester United, Real Madrid and the MLS club LA Galaxy, has visited Miami.

Last month, a source familiar with the negotiations told Reuters that Beckham, who retired from professional soccer earlier this year, has chosen the city as the site for an expansion team. His MLS player contract included an option to create a team for $25 million.

On Wednesday, Beckham visited the campus of FloridaInternationalUniversity and the MarlinsPark baseball stadium with one possible investor in the MLS team, Bolivian-born billionaire Marcelo Claure, CEO of Miami-based wireless services company Brightstar Corporation.

The two looked at the stadiums as potential sites until a possible permanent soccer stadium can be built, said Vanessa Santana-Penate, a spokeswoman for Miami-Dade county mayor Carlos Gimenez.

The visits came a day after Beckham and Claure dined with Gimenez in Claure's Miami Beach home, Santana-Penate said.

Claure, who owns his own soccer team in Bolivia, posted a picture on his Instagram account with Beckham and Simon Fuller, whose management company 19 Entertainment handles Beckham's business affairs.

"An unforgettable night in my house in Miami," Claure wrote in Spanish, all three men smiling in the picture.

Beckham's trip also coincided with the arrival of Brazil's national soccer team to Miami. Brazil will play Honduras in an exhibition match on Saturday in front of what is expected to be a packed house at Sun Life stadium, home of the Miami Dolphins American football team.

MLS has confirmed the league is in discussions with Beckham about a team but has said it is awaiting a formal bid, including details of the ownership group and a stadium plan.

Beckham's Galaxy contract contained a franchise option, for a set fee of $25 million, much less than the $100 million ManchesterCity and the New York Yankees paid for their new team, New York City FC, which will join the league in 2015.

While Miami's status as one of the largest Latin American population centers in the United States makes it an obvious option for MLS, the city has proved to be a tough market.

The Miami Fusion, who played in nearby Fort Lauderdale, joined MLS in 1998 but were closed by the then struggling league after four seasons along with another Florida team, the Tampa Bay Mutiny.