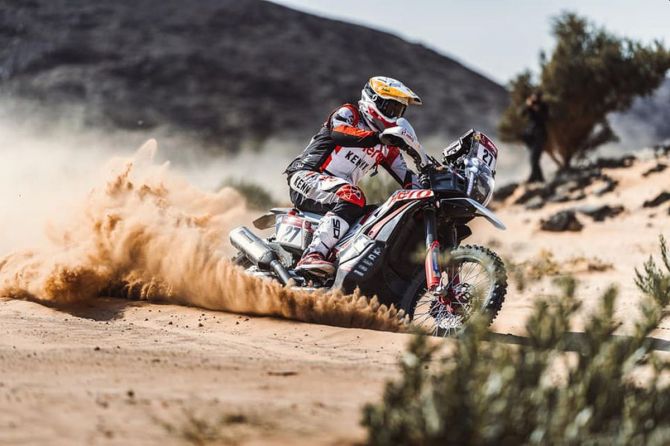 IMAGE: Hero MotoSports Team's Joaquim Rodrigues kicks up some as he revs up the pace at the Dakar Rally 2021. Photograph: Kind courtesy, Hero MotoSports/Facebook

Hero MotoSports Team Rally rider Joaquim Rodrigues recorded his fourth top-10 finish at the Dakar Rally by claiming the 10th spot in the 10th stage that concluded, in Neom, Saudi Arabia, on Wednesday.

It was the team's fifth top-10 finish.

His teammate Sebastian Buhler though had a more subdued stage after losing a lot of time in the beginning due to a navigation mistake.

Rodrigues is now placed 11th and Buhler 16th place in the overall standings after 10 stages.

Stage 11, the penultimate stage of the rally, will offer the longest special with 511 kms to be done under the clock, taking the rally to the Yanbu region in Saudi Arabia.

"It was a pretty fast and dangerous stage again today with a lot of rocks. I decided to focus more on navigation and it all went pretty well. I managed to ride at a good pace and did not commit any navigation mistakes. I am happy to finish the stage and get a good result for the team," Rodrigues said.

Buhler said, "I made a mistake in the beginning of the stage today that cost me a lot of time. But after that it went well as I began to feel good on the bike and got into a decent rhythm. Now only two days are left for the finish so it is important to concentrate harder and get a good result, but at the same time not take unnecessary risks as well."