'I don't think that's a problem specific to India, I think a lot of other teams also struggle with it' 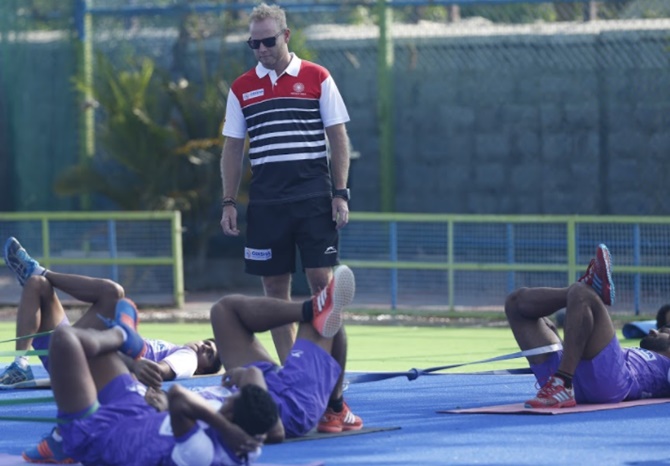 There haven't been any defeats to worry over but the Indian men's hockey team would be eager to ensure that its far-from-convincing campaign finds some footing when it takes on lower-ranked Malaysia at the Commonwealth Games, in Gold Coast, on Monday.

Starting off against Pakistan should have been ideal to get the adrenaline going for the defending silver-medallists but the pool B opener was among the most insipid encounters between the arch-foes till the last seven seconds produced all the drama, ending in a 2-2 draw.

The Indians were expectedly livid, most of all coach Sjoerd Marijne, who went to the extent of saying that he didn't even recognise the team that played the game.

Next up was Wales and the scoreline read 4-3 in India's favour, a win but the kind which should have been way more convincing.

Malaysia is ranked way below in the FIH charts but Manpreet Singh's side has been known to slip up when least expected, the opening game against Pakistan being a testimony to that.

A heartening aspect of the campaign so far has been forward Dilpreet Singh being in good scoring touch. A couple of goals have also come from the stick of defender Harmanpreet Singh.

In fact, scoring goals hasn't exactly been a problem for India, the problem has largely stopping the opposition from scoring, especially late into the proceedings.

"I don't think that's a problem specific to India, I think a lot of other teams also struggle with it," insists Marijne.

But it is hard to look away from the fact that India have had a disastrous tendency to let late goals in.

Even against Wales, a penalty corner was conceded in the 58th minute of the match before the team recovered quickly enough.

Malaysia, on the other hand, have been enduring an ordinary run so far. The defeated Wales 3-0 but after being hammered 0-7 by England in their tournament-opener.

India have not lost to Malaysia in a major tournament since the 2010 Asian Games.

The last time the two teams clashed, in the Sultan Azlan Shah Tournament in March, India had notched up a massive 5-1 triumph. And a similar victory would be expected tomorrow given the gulf between the two sides.

A win on Tuesday would strengthen the two-time defending silver-medallists chances of making the semifinal as well and perhaps aim for the gold that has eluded them thus far in the mega-event.