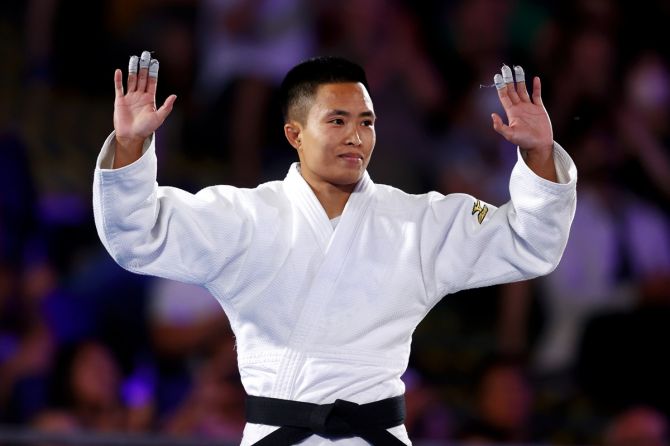 India had much to cheer about at the Commonwealth Games in Birmingham on Monday, adding three more medals for a nine-medal haul after four days of competition.

Judokas Shushila Devi and Vijay Kumar won silver and bronze in the 48 and 60kg events respectively while Harjinder Kaur clinched a bronze in the 71kg weightlifting competition.

India have more medals coming their way as the women's fours lawn bowls, mixed badminton and men's table tennis teams made it to the finals.

Here's a look at Indian athletes' performance on Monday, Day 4 of the Games.

The men's doubles pairing of Satwiksairaj Reddy and Chirag Shetty gave India the lead in the semi-final with a 21-11, 21-12 win over Yong Kai Terry Hee and Andu Jun Kian Kwek.

Featherweight Mohammad Hussamudin also advanced to the quarter-finals with a 5-0 win over Mohammad Salim Hossain of Bangladesh.

Light-heavyweight Ashish Kumar (80kg) later joined them in the last eight stage with a 5-0 decision over Travis Tapatuetoa of Niue.

In the women's Keiren first round, Triyasha Paul, Shushikala Agashe and Mayuri Lute failed to qualify for the second round.

Triyasha and Shushikala finished in the third and fourth place in their respective heats of the first round repechage. Only the first rider in each heat qualified for second round.

India squandered a three-goal advantage and were held to a 4-4 draw by hosts England in their second Pool B match.

Sushila Devi Likabam signed off with a silver medal after losing the women's 48kg final to South Africa's Michaela Whitebooi.

There was a second medal in judo for India when Varanasi's Vijay Kumar Yadav (men's 60kg) defeated Petros Christodoulides of Cyprus by 'Ippon' in just 58 seconds for the bronze.

Suchika Tariyal entered the bronze medal round after defeating Donne Breytenbach of South Africa in the women's 57kg repechage.

The lawn bowls team, comprising Lovely Choubey (lead), Pinki (second), Nayanmoni Saikia (third) and Rupa Rani Tirkey (skip) got the better of New Zealand New Zealand 16-13 in the semi-final of the women's fours event to make sure of a first-ever Commonwealth Games medal.

They will take on South Africa in the gold medal round on Tuesday.

G Sathiyan and Harmeet Desai won the opening doubles against Olajide Omotayo and Abiodun Bode 11-6, 11-6, 11-7 to set the tone for the tie.

Sajan Prakash's campaign at the Games ended as he failed to make the semi-finals of the men's 100m butterfly event. He clocked 54.36 seconds and finished seventh in his heat, 19th overall.

The best 16 athletes progress to the semi-finals.

He also failed to make the final of the 50m and 200m butterfly, the other events he participated in.

Harjinder Kaur won bronze in the women's 71kg category, with a total lift of 212 (93 in snatch and 119 in clean and jerk). She was assured of a podium finish after much drama as Nigeria's gold medal favourite Joy Eze was knocked out following three failed attempts in the clean and jerk category.

Ajay Singh missed the bronze medal by a whisker. His total lift of 319kg (143kg+176kg) could only earn him a fourth-best finish in the men's 81kg event.

Saurav Ghosal progressed to the men's singles semi-finals, but it was curtains for 18-time National champion Joshna Chinappa as she lost to Canada's Hollie Naughton 9-11, 5-11, 13-15 in the women's singles quarter-finals. 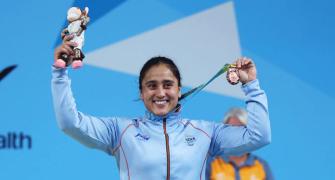 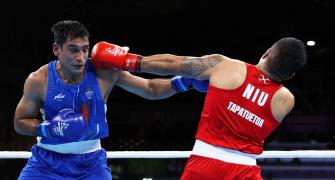 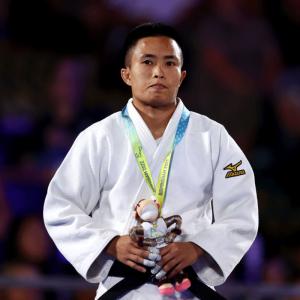 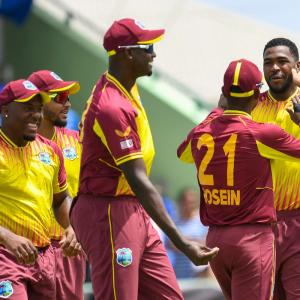