'My father used to be a boxer and I am a weightlifter. This tattoo shows just that' 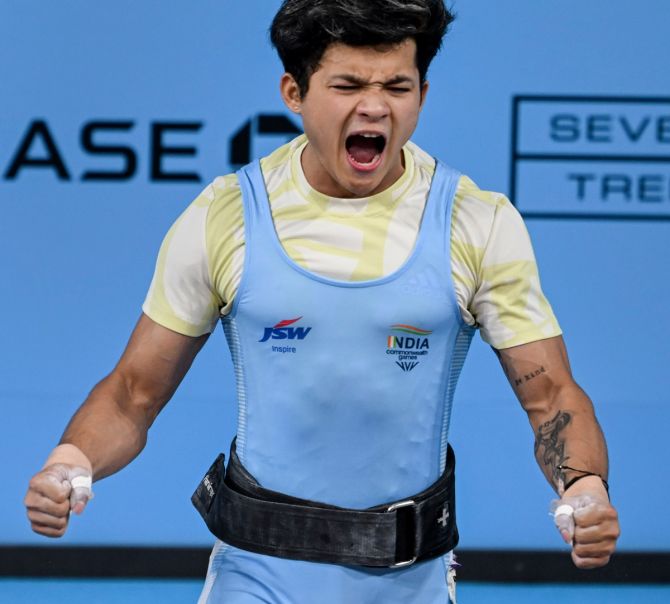 Indian weightlifter Jeremy Lalrinnunga, who won the country its fifth medal at Commonwealth Games 2022 in Birmingham after he captured a Gold in men's 67 kg final, shared an interesting story behind the tattoo he wears on his left arm.

On his left arm features a tattoo depicting a person lifting weights, with date 11 November 2011 written above it in Roman numerals. This tattoo signifies him and the day he started lifting weights. Just below this, features a depiction of a man standing straight, wearing boxing gloves. This signifies his father Lalneihtluanga, who used to be a boxer.

"This story behind this tattoo is that my father used to be a boxer and I am a weightlifter. This tattoo shows just that," said Jeremy after his match.

Indian weightlifter Jeremy Lalrinnunga created history by capturing a gold medal with a record-breaking combined lift of 300 kg in the men's 67 kg final at the ongoing Commonwealth Games 2022 in Birmingham on Sunday.

With this, he won the country its fifth medal at CWG 2022 and its second gold medal at the event.

He had achieved a record-breaking 140 kg lift in the snatch category and 160 kg in the Clean and Jerk category, which combined to give him a lift of 300 kg, a record at the Commonwealth Games.

Jeremy Lalrinnunga successfully lifted 136 kg in his first Snatch attempt to move to the top of the leaderboard. Edidiong Joseph Umoafia was at second with 130 kg and Samoa's Vaipava Ioane at third with 127 kg at the time of his first attempt.

Lalrinnunga set up a new Commonwealth Games record by lifting 140 kg in his second Snatch attempt.

He tried to better this record by going for 143 kg in his final attempt but failed to do so. He finished the Snatch category with 140 kg, at the top of the table. Edidiong Joseph Umoafia was at second with 130 kg and Samoa's Vaipava Ioane at third with 127 kg at the end of the Snatch event.

With the Indian at the lead position, proceedings moved to the Clean and Jerk category.

Ditto Titus Ika of Nauru gained an initial lead in the Clean and Jerk category and overall competition with a 135 kg C&J lift and combined lift of 240 kg. Ruben Katoatau of Kiribati took the lead further with combined lift of 250 kg, with 114 kg in Snatch and 136 kg in Clean and Jerk. The lead crossed 250-plus mark when England's Jaswant Singh Shergill lifted 140 kg, taking his combined lift to 254 kg.

Nigeria's Umoafia lifted 150 kg in the first attempt to take his combined lift to 280 kg. Jeremy now had to lift 154 kg in his first attempt to match the Nigerian, which he did successfully. With this, he set a new CWG record and brought himself to the lead in the overall competition with a combined lift of 294 kg.

In his second C&J attempt, Jeremy lifted 160 kg to take the lead with a combined lift of 300 kg. By lifting 300 kg combined, he had set another new CWG record.

In his final C&J attempt, Jeremy decided to lift 165 kg but he failed. Nonetheless, his combined lift stayed at 300 kg and was not matched by any other opponent.

Jeremy ended up adding the fifth medal to India's tally by capturing a gold medal. It was India's second at the 2022 CWG after Mirabai Chanu's gold in weightlifting women's 49 kg category.