British boxers ruled in the ring as they enjoyed a successful run in the semi-finals at the 2010 Commonwealth Games, at the Talkatora Indoor Stadium, in Delhi, on Monday.

They won 13 out of 20 semi-final bouts in various categories.

England completed a sweep -- all five of their boxers going through to the gold medal round -- while four boxers from Northern Ireland also advanced to the title round, and three from Scotland and one from Wales made the grade.

It turned out to be a nightmarish day for India, as four out of their seven boxers, including world No 1 Vijender Singh lost in the semi-finals

In fact, all the four Indian boxers -- Jai Bhagwan, Dilbagh Singh, Amandeep Singh and Vijender -- were all shown the door by the boxers from United Kingdom.

Olympic bronze medal-winning pugilist Vijender (75kg) bowed out in the semi-finals after a couple of controversial warnings, prompting a the Indian team to lodge a protest.

Although India is set for its best-ever medal haul of seven, the colour of the metal yet to be decided, it was a thoroughly disappointing day for the nation's boxers as they found themselves at the receiving end of some harsh refereeing -- the most stunning being Vijender's 3-4 loss to England's 22-year-old former cadet champion Anthony Ogogo.

The Indian team has filed a protest against the refereeing.

"We have a filed protest. A jury will now sit after the last bout of the day and they will review the bout. Altering the result is also a possibility," Indian Boxing Federation secretary-general Col P K Muralidharan Raja said.

If the result stands, then Vijender, who won a silver in the previous Commonwealth Games, will have to settle for a bronze this time.

All of Ogogo's four points came through warnings handed to Vijender in the third round by Canadian referee Michael Summers.

The world No 1 Indian was leading 3-2 with barely 20 seconds left on the clock when he was handed a warning for holding his opponent in an engrossing fight.

The decision seemed harsh after Vijender was penalised earlier in the bout for hitting Ogogo on the back of his head.

The capacity crowd at the Talkatora stadium booed Ogogo and chanted 'cheater, cheater' even as a visibly upset Vijender made his way out of the arena without speaking to the waiting media.

Ogogo, exulting after perhaps the biggest win of his career, said a "boxer of Vijender's stature should not have acted the way he did in the ring".

"If you think the warnings were harsh then even I didn't get points for some of the clear punches I landed. Even if he had not been warned, I think I would have won," Ogogo said.

Olympic bronze medallist Paddy Barnes (Light Flyweight 49kg), Patrick Gallagher (Welterweight 69kg) and Thomas McCarthy (Light Heavyweight 81kg) will each have the chance to win a gold medal in the finals on Wednesday.

Barnes cruised to a 5-0 victory over Amandeep, followed by Gallagher clinching a thriller 4-3 victory against another Dilbagh while McCarthy got the better of Kenyan Joshua Makonjio. 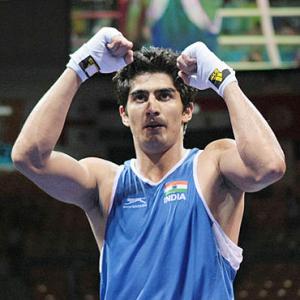 'I am the best, pressure doesn't affect me: Vijender 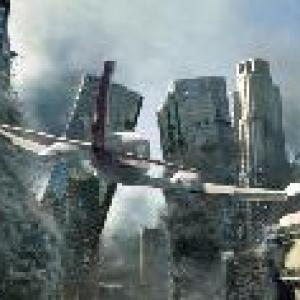