Justice Hima Kohli granted bail to Jayachandran, a key aide of Commonwealth Games Organising Committee chairman Suresh Kalmadi following the CBI's failure to wind up the probe and file the charge sheet in the case within the stipulated 60-day period.

Justice Kohli enlarged Jayachandran on bail on a personal bond of Rs 50,000 with two sureties of the same amount.

Jayachandran, the OC Joint Director (Finance), had been arrested by the CBI on November 21.

During the arguments on his bail plea on January 17, his counsel had pleaded innocence before the court, saying he had "no role which can be termed as a criminal act in the alleged financial irregularities in the QBR".

Jayachandran was taken into custody days after co-accused T S Darbari and Sanjay Mahendroo were arrested on November 15. The duo too have already secured bail on the ground of the CBI's failure in concluding the probe and filing the charge sheet.

Jayachandran's counsel had contended that the decision to award the contract for holding QBR was taken by the OC.

"I had to only see as to whether the contracts were duly approved or not. I had no other role," he had said.

The counsel for the CBI, however, had opposed the plea and filed certain documents to buttress the charge that the accused had played an active role in the case.

The three accused are facing charges of causing losses to the exchequer in award of contract to the tune of Rs 1.55 crore in holding the QBR on October 29, 2009, in London.

The CBI has registered two cases in connection with contracts awarded to London-based A M Films and AM Car and Van Hire Limited at alleged exorbitant rates. 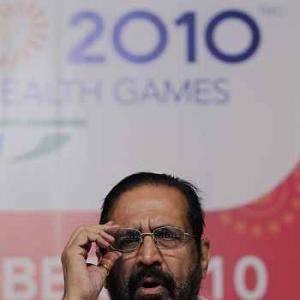