The agency had registered a fresh case under various sections of the law for awarding contracts for overlays at different venues for the Commonwealth Games at exorbitant rates, a CBI spokesperson said.

Shekhar, Kalmadi's personal assistant, was produced before a court in Pune for transit remand.

Nearly Rs 600 crore worth contracts relating to the overlays project are under the scanner.

The agency conducted a number of searches in certain premises across the country early in January in connection with the scam in the Games, including those of an officer under the Union Sports Ministry.

The overlays contracts are also under the scanner of the Income Tax Department and Enforcement Directorate.

The CBI had earlier registered three FIRs for alleged corruption in the projects and events in the run-up to the sporting extravaganza. 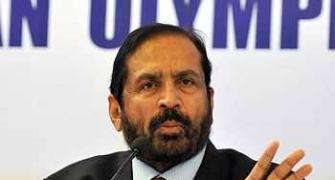 Kalmadi sacked as Organising Committee chairman
I never thought I would play the World Cup: Sreesanth
Not aware if PM is coming for Nat Games: Kalmadi