Manuel Neuer, David Alaba, Jerome Boateng and Thomas Muller were a part of the Bayern Munich squad that won the Champions League in 2013, defeating Borrusia Dortmund in the final. 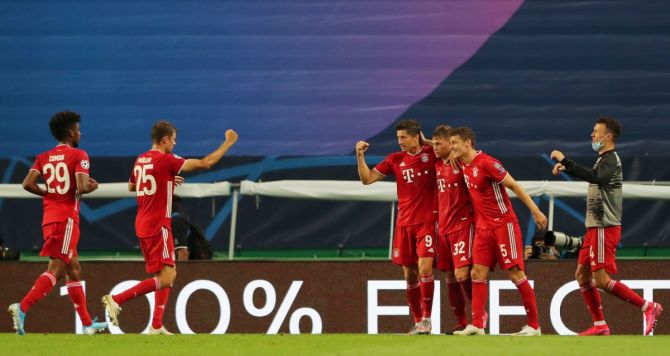 Bayern Munich goalkeeper Manuel Neuer has said that the side has more talent at their disposal now as compared to their Champions League team in 2013.

His remark came as Bayern Munich progressed to the finals of the Champions League after defeating Lyon 3-0 on Tuesday.

Neuer, David Alaba, Jerome Boateng and Thomas Muller were a part of the Bayern Munich squad that won the Champions League in 2013, defeating Borrusia Dortmund in the final.

"We are better positioned across the board. Now we have a class that not only includes the 18-man squad, it is fantastic what a great team we have," Goal.com quoted Neuer as saying.

"Calm characterises him, especially before games like this," Neuer said.

"He prepared us very well for the games, no matter which opponent we played against. We always have a plan. You can see the result on the pitch," Neuer said.

In the match against Lyon, Serge Gnabry scored twice for Bayern while Lewandowski also registered one goal to give the side a 3-0 win.

With this, the pair of Gnabry and Lewandowski surpassed a record previously set by Cristiano Ronaldo and Gareth Bale for Real Madrid.

The Bayern duo has now combined for 24 goals in the competition, surpassing the previous record set by Ronaldo and Bale, who fired 23 times between them during the 2013-14 Champions League.

Bayern Munich will now take on Paris Saint-Germain in the Champions League final on Sunday.