That Cristiano Ronaldo is as vain as they come is no secret. But if you had any doubts about his self-obsession, he laid those to rest during Real Madrid’s 7-1 La Liga win over Deportivo La Coruna on Sunday. 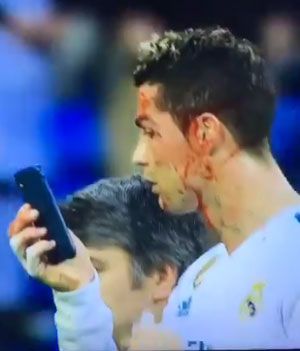 Ronaldo scored twice against Deportivo to help ease Real's recent crisis but paid a heavy price for his second goal in the 84th minute as opposing defender Fabian Schar kicked the Portuguese forward in the face as he leapt to net his side's sixth goal of the game.

- Mirror, mirror on the phone, am I still the fairest of them all? - asks Ronaldo

Ronaldo was left bleeding and while going off the field for a check, he asks the club medic to give him his phone so he could look at his bruised face.

Seeing the cut on the phone cam, his pretty face damaged, the Portuguese forward’s expression said it all.

The act, which some would term conceited, split Twitter down the middle.

While some made jokes, his fans showered him with sympathy.

@VinaySundar tweeted: Haha! That was definitely something new! Ronaldo gets a cut on his face, asks for the team doc's mobile phone, checks the damage to his face in the camera, isn't happy with what he sees, and then subs himself! #RMADEP

@labeledbieber tweeted: "Lol @ ronaldo for taking that phone and checking how big the scar is"

One Talkative Rocker @beewol wrtote: “Ronaldo went for the ball with his head, a defender went for it with his foot, they collided. Ronaldo scored, but not before injuring himself, and bleeding. Ronaldo asked for a mirror to check out his face -- during the game. I kid you not!

We have seen it all.”

One Football Meister @CruiseFootball was all cheeky about the act: “Ronaldo checking if United has announced Alexis Sanchez. While bleeding.”

Some Twitter users compared the episode to the one when Barcelona’s Lionel Messi was left bleeding.

Bronco Al (YNWA GB2) @whychoose3  tweeted: “Ronaldo whips out the phone, makes sure his pretty little face is okay. Messi gets assaulted v Madrid and sticks tissue in his mouth to stop the bleeding and gets on with it. Never, ever compare Ronaldo to Messi again.”

While the giggles and critics were many, ‘bloody’ Ronaldo also found some support.

Ronaldo’s teammate Nacho said: "Cristiano suffered a strong blow and they stitched him up a little bit. He left his blood on the field for this badge."

One fan Sudarshan Ravikumar tweeted: “Cristiano Ronaldo – Warrior. What a will power…Studs punctured his Face and he's  bleeding all over his face still he heads the ball to goal.”

@Emperor_RM wrote: “Ronaldo uses the phone to check how bad his wound is and some make fun of it. All this after him scoring 2 goals and giving 1 assist. He is bigger than football.

“He's bleeding for a goal. My Goat! Love you @Cristiano,” tweeted one @nancymadrisco.

@suhailcr7 tweeted: “I was literally in tears when I saw my man was bleeding lyk this…I don't  know what words have put to xpress my feeling..."you are like my brother from another mother @Cristiano " get well soon .take care #RealMadridDepor #cr7 #Cristiano”.

Whichever side you are on, you can’t deny that the bleeding infused extra spice to the match and ample attention to the self-centred Ronaldo.