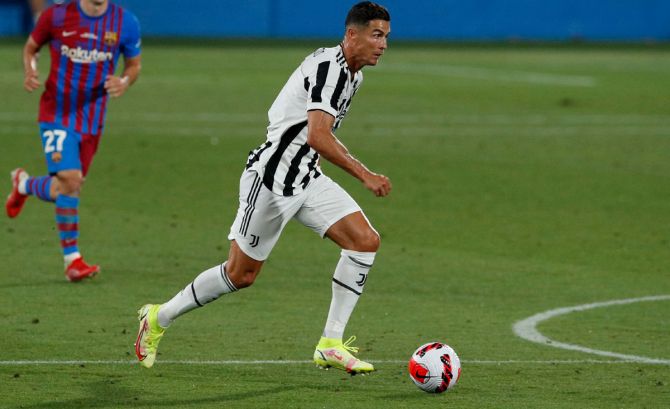 IMAGE: Cristiano Ronaldo has been linked with a move to a host of clubs this summer, with reports in Spain suggesting he could return to Real Madrid. Photograph: Albert Gea/Reuters

Juventus coach Massimiliano Allegri said Cristiano Ronaldo has told him that he will stay at the club this season, something the new boss believes guarantees goals for the Serie A giants.

Ronaldo has been linked with a move to a host of clubs this summer, with reports in Spain suggesting he could return to Real Madrid, while the Italian media speculated the 36-year-old has been offered to Premier League champions Manchester City.

"He has always trained well, I just read the gossip in the papers. He never told us he wanted to leave," Allegri told a news conference ahead of his side's season opener at Udinese on Sunday.

"Ronaldo told me that he is staying at Juventus.

"He is an added bonus for us, because he guarantees a large number of goals. Obviously, we also have to work as a team to get the best out of an individual."

Allegri is back at Juventus for a second spell having taken over from Andrea Pirlo, who disappointed in his only season in charge of the Turin side, steering the club to a fourth-placed finish in Serie A last term.

The Italian tactician's five seasons at the helm from 2014 to 2019 brought five league titles, four Coppa Italia wins and two runners-up finishes in the Champions League.

"There must be doubts and uncertainties about me and that creates more attention and concentration, even when things go well," Allegri added.

"This year will be like every year - Juve aims to win all competitions. It will be a balanced championship, to win you have to be consistent.

"We must realise that in order to win the Scudetto, we need daily work that is physical, technical and mental. If we are still in the running for the title in March, that means the team has found its balance."