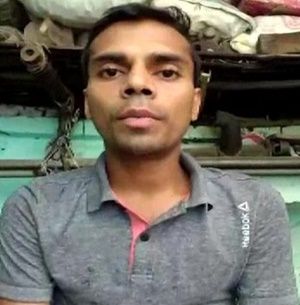 IMAGE: Meraj Ali, who has clinched medals in athletics, said he has no money to resume practice. Photograph: ANI

Coronavirus crisis in the country has had a dire impact on the young sportspersons, especially those from underprivileged families as they are finding it hard not just to continue their sport but even to earn their livelihoods.

Several underprivileged athletes had to bear the brunt of the nation-wide lockdown since March. Although the country has started to ease restrictions, these athletes have not been able to recover from its impacts. They are being forced to fend for themselves and their families by taking odd jobs like selling fruits.

Meraj Ali, who has clinched medals in athletics, said he has no money to resume practice. He said his dream is to win a medal at the Olympics.

"Due to lockdown, my brother lost his job, and at that time, neither my father earned nor my brother. So, my father again started to work. There were a lot of difficulties and after the lockdown was lifted my coaches used to call me for practice but I have no money," Ali said.

Another athlete Ali Ansari has been forced to sell fruits and said the COVID-19 has impacted him badly. Talking about his achievements, Ali said that he has won many medals at the state and national level but now he is finding it hard to continue his sports.

Rahul, who won many medals in athletics, is also struggling to make a living. He said that he has a part-time job but he is unable to make enough money for his survival.

Lokesh and Harendra, who belong from Aligarh and have participated in several tournaments, are dependant on their coach's help and support. Lokesh's father is a rickshaw puller in the national capital while Harendra's parents are daily wagers.

Both have resumed training under their coach Vipin in Delhi. Vipin said it's hard for him to coach both of them after lockdown but he is trying and focusing on both of them as much as he can.