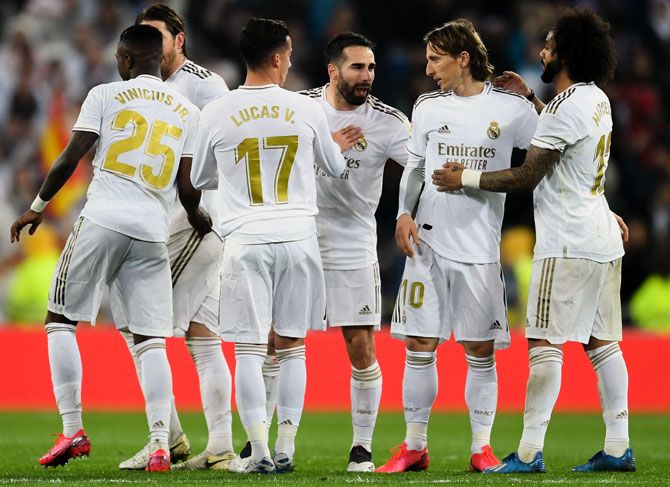 IMAGE: Real are set to wrap up the title on Thursday without any fans present at their tiny Alfredo Di Stefano stadium inside their training complex, where they have been playing home matches in order to accelerate renovation work to the Bernabeu. Photograph: David Ramos/Getty Images

Real Madrid trophy wins are usually marked by masses of fans flocking to the city's Cibeles fountain, where they are joined by the team on an open-top bus before heading into the Santiago Bernabeu stadium to continue the party.

But their imminent La Liga title triumph, which will be clinched with victory against Villarreal on Thursday, will feel very different due to public caution about mass gatherings amid the COVID-19 pandemic.

Real are set to wrap up the title without any fans present at their tiny Alfredo Di Stefano stadium inside their training complex, where they have been playing home matches in order to accelerate renovation work to the Bernabeu.

The traditional party at Cibeles has also been called off, with Real releasing a statement urging fans not to gather in the city centre.

Police are keen to avoid a repeat of scenes of supporters thronging the streets outside Cadiz's stadium last week in anticipation of sealing promotion, which drew widespread criticism on social media.

"Madrid fans know these are special circumstances and they don't want to be blamed for another surge in infections in the city," he told Reuters.

"Most fans will celebrate at home or in local town squares, it's going to be a very controlled celebration, unlike any before."

Even though it will be a restrained party, Roncero said the title will still bring joy to many people in one of the worst-affected countries in Europe by the virus.

"Real Madrid has the most fans in Spain and like everyone else they have suffered during the pandemic. But they can be proud of the team for winning the title with so much dignity and bringing them a smile in this tough period," he added.

Real coach Zinedine Zidane avoided discussing toasting the title until it was mathematically sealed, but said he hoped his side's winning run could offer people relief.

"Football is a way to forget and escape from day-to-day life and we are thinking about our fans who cannot come to see the games," he said.

"We know they are looking to us and they can be proud of what this squad is doing."

© Copyright 2021 Reuters Limited. All rights reserved. Republication or redistribution of Reuters content, including by framing or similar means, is expressly prohibited without the prior written consent of Reuters. Reuters shall not be liable for any errors or delays in the content, or for any actions taken in reliance thereon.
Related News: Real Madrid, Alfredo Di Stefano, Cibeles, Tomas Roncero, Santiago Bernabeu
SHARE THIS STORYCOMMENT
Print this article 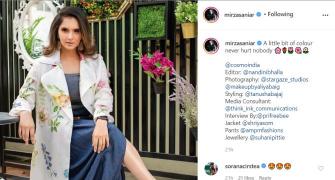 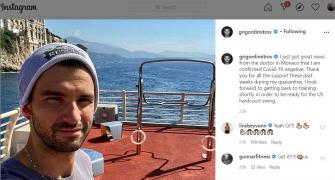 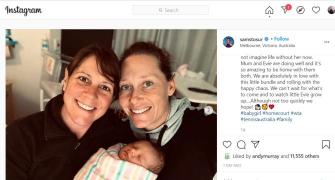 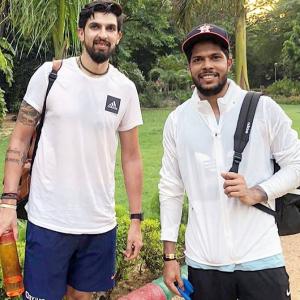